Unfortunately for the Trump campaign, what we’ve learned from the Wikileaks document dump about Hillary Clinton isn’t damning enough to alter the dynamic of the presidential race. Most of it is the sort of inside baseball stuff about the Clinton campaign that in another era might only come out later when books by authors like Theodore S. White and Richard Ben Kramer were published about the election. This kind of material tells us what the former secretary of state and her staff really think, and makes her look like the unprincipled and hypocritical power-seeker that has led voters to see her as dishonest and untrustworthy. Even if that’s not sufficient to outweigh Trump’s flaws in the minds of a majority of Americans, it’s fascinating stuff for political junkies. It’s also worth examining for what it tells us about how the likely winner will govern and the future of her party.

The juicy tidbit the Russian-assisted hack gave us about the Clinton campaign’s deliberations regarding how to broach the mention of Israel during the primaries should be viewed in that context. According to the hacked emails, top figures in the Clinton effort were at odds about whether she should even mention Israel while trying to woo Democratic primary voters.

In May of last year, Jake Sullivan, the former State Department staffer and top Clinton foreign policy advisor, sought to include a mention in a campaign speech about supporting and standing up for Israel. Clinton’s campaign strategists vetoed the idea, pointing out that the only people who cared about the issue were “Republican primary voters.” In particular, campaign manager Robby Mook flatly stated: We shouldn’t have Israel at public events. Especially dem [Democratic] activists.” The matter was resolved when they all agreed that it was okay for Clinton to speak of Israel “when she’s with donors” but not in public.

The good news to be gleaned from this chilling exchange is that there were at least some influential voices inside the Clinton machine that thought Israel was important. Some in the Clinton camp wanted to highlight their candidate’s support for the Jewish state and opposition to terrorism targeting its citizens. Much like Thomas Friedman’s celebration of the fact that Wikileaks reveals Clinton to be a supporter of global free trade rather than the Bernie Sanders clone she has pretended to be, pro-Israel activists should be somewhat encouraged. If her comments to her presumably pro-Israel donors are what she really thinks as opposed to a campaign profile that largely ignored the Middle East that might give friends of the Jewish state some hope that she will, as Prime Minister Netanyahu has hinted, at least be less hostile than President Obama.

But it also illustrates that the Clinton brain trust’s evaluation of opinion among rank and file Democrats conforms to the view of many conservatives who saw Sanders’s openly hostile stance toward Israel as a source of strength for his primary campaign. Polls have long shown Democrats are far less sympathetic to Israel than Republicans. But this trend has now gotten to the point that not only do Democrats not even bother to pretend that Israel is as much a reflection of the deep partisan divide in the country as any other issue but they also worry that even a mention of it will alienate their base. So, while it’s possible to argue that the policies of a second Clinton presidency will resemble those of her husband more so than those of President Obama, the internal pressure from the Democratic Party may be pushing her hard to continue her former boss’s desire for more daylight between the two countries.

That’s a significant problem. While Israelis remember Bill Clinton as a good friend, there was plenty of tension within his administration was between those who prioritized the peace process over Israel’s security. The former generally won the day. The truth about Yasir Arafat and the Palestinian Authority was suppressed to maintain the fiction that the Oslo Accords were a great success. With Hamas now running an independent Palestinian state in all but name and Arafat’s successor Mahmoud Abbas still trying to appease both a Palestinian public that applauds terror and his Western donors, the situation even more dangerous today. How can a Democratic president continue to uphold an alliance that her party’s base opposes? Thanks to a Donald Trump campaign that can’t seem to get out of its own way, it looks like we’re about to find out. 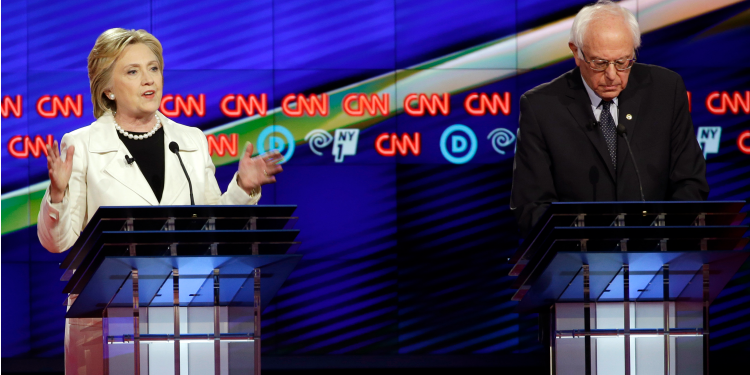