Democrats always knew the day they faced the voters without Barack Obama at the top of a presidential ticket would be a difficult one. With only a week to go before that day arrives, the problem is just as bad as they feared it might be. Though Hillary Clinton still retains a built-in advantage in the Electoral College, the growing demographic edge among minorities that was the Democratic Party’s ace in the hole in the last two presidential elections may not be as great as they were hoping. Reports detailing a decline in African-American early voter turnout in battleground states  is alarming news for the Clinton campaign.

If the trend holds up, the marked downturn in black turnout, especially in North Carolina and Florida, calls into question a lot of assumptions about the presidential race. Democrats expected that there would be some leakage from President Obama’s winning 2008 and 2012 coalitions, in which young voters, women, and minorities swamped Republicans. But the shift in the polls in the last week, with Donald Trump taking small leads in the Real Clear Politics average of polls in Florida and North Carolina, illustrates that Democrats were mistaken to think a dislike of the GOP candidate would drive black turnout as much as did a love of Obama.

Trump’s character flaws ensure that young voters and women are every bit as motivated to vote for Clinton as they were for Obama. Polls indicate that Trump’s share of the black vote may be even lower than John McCain or Mitt Romney’s. But if they aren’t motivated to turn out, Clinton will have proved that the Obama coalition was solely the result of a desire to vote for the first African-American president and that this energy was not transferable to his designated successor.

That’s why President Obama is being called in to rescue Clinton. He acknowledged today in an interview with a black radio show that the African-American vote “is not as solid as it should be.” He is arguing that black voters must protect his legacy against Trump because the GOP candidate is promising to reverse everything he did. But at the moment, those appeals aren’t working. At least, not to the extent that is necessary for Clinton to match or come close to Obama’s vote totals.

Clinton’s decline in the last week after the Comey letter to Congress is, as this analysis of the latest ABC News/Washington Post indicates, primarily a function of her being considered untrustworthy. That has hurt her badly among independents and even some Democrats. Trump’s numbers have gone up slightly as wavering Republicans return to the fold, now that it no longer looks as if Clinton will win easily. But while Clinton’s percentage of the black vote isn’t likely to decline, it’s far from clear that a desire to vindicate Obama’s legacy is the sort of thing that can motivate African-Americans–or anyone else, for that matter–to bother to vote for a person for whom they have little enthusiasm or trust. Nor may fears about the activities of white racists on Trump’s behalf. If so, what happened in the last two presidential elections will be seen as a tribute to Obama’s personal appeal and not the sea change in American politics that many liberals proclaimed.

The Democrats have a far superior ground game to that of the Republicans, but it cannot force people to vote that lack the interest to do so. Unless the Clinton campaign can start ginning up more enthusiasm among their party’s most reliable voting group, an election they had in their pockets a few days ago will turn out to be closer than anyone thought. 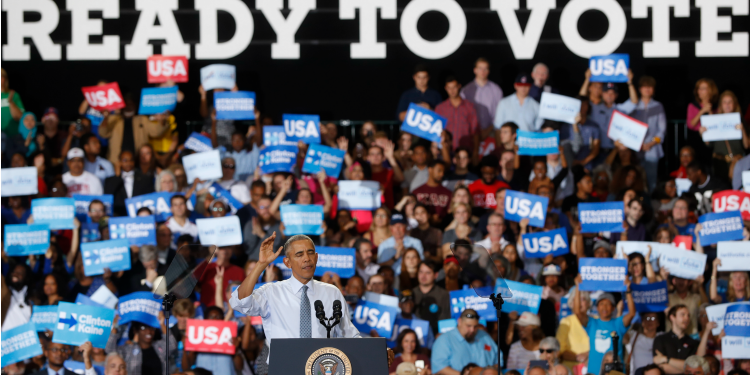