This has been a troubling week for Hillary Clinton and her supporters. Most Republicans seem to be falling in line behind Donald Trump now that he’s the party’s presumptive nominee for president. Despite the misgivings of many on the right about him, Trump has received the usual post-nomination clinching boost in the polls that any candidate might get. That’s helped tighten the competition and put him close to Clinton in some polls and even ahead of her in surveys taken by Rasmussen and Fox News. Those numbers are shocking for many Democrats and even some of us in the media that assumed Trump was too far behind Clinton to make much of a race of it. All this has to leave the Clinton camp wondering what exactly is the problem. Is Trump stronger than they thought? Or is it the lingering battle with Bernie Sanders for a Democratic nomination that was decided months ago but which seems to be getting nastier with each passing week?

While both possibilities are disturbing thoughts for Clinton supporters, it is the latter question that must really be frustrating them at the moment. They can dismiss Trump’s strength as merely as something that will fade, but the really scary thought is the possibility that Sanders supporters are so embittered by the Democratic race that they might actually stay home in November, turning what ought to be an easy win for Clinton into a nail-biter. Many are openly wondering why Sanders can’t get with the program and start toning down the attacks on Clinton even if he continues campaigning through next month’s last primaries. The answer to that question is as obvious as the nose on their faces but somehow seems to have eluded them: he’s a career radical socialist, not a Democrat. Anyone who thinks he will do much to help Hillary when he can continue pushing her farther to the left has not only failed to pay attention to what’s been happening since he entered the race last year but have learned nothing about his career.

As for Trump, Democrats shouldn’t underestimate the importance of what’s happened in the last few weeks. After a primary campaign that he won but during which he also repeatedly demonstrated his utter unsuitability for the presidency in terms of character, conduct, knowledge of the issues and his embrace of dangerous isolationist and protectionist and anti-immigrant stands, it seemed possible that he would head into the fall with a considerable percentage of Republicans firmly determined not to vote for him. But once his last opponents dropped out, most GOP office holders and partisans began jumping on his bandwagon regardless of his faults. This week, Trump’s list of conservative judges that he’d consider nominating for the Supreme Court helped some more principled Republicans to accept him. Today, the National Rifle Association gave the billionaire their enthusiastic endorsement to keep the momentum building within the GOP. All this means that the Republican Party is far more united than anyone might have thought which at the very least gives Trump a fighting chance in November.

But while Trump’s bump in the polls may fade, the bitterness of the Democratic race poses a serious threat to Clinton. With personal unfavorable poll ratings that rival even those of Trump, she needs the same sort of huge turnout of minority voters and young people that elected Barack Obama in 2008 and 2012 to win. But the longer the battle with Sanders goes and the harsher the rhetoric he and his backers use against Clinton and the Democratic party establishment that supports her, the harder it will be to generate that wave of good will and urgency that is necessary to replicate Obama’s victories. Surely Sanders and his camp know this too. They also know that he has no chance to stop Clinton rendering further effort pointless and making the sort of angry attacks they’ve been launching at her counter-productive if their goal is to retain the White House for the Democrats and stop Trump. Why then won’t they stop or at least start acting as if they understand that in a few months they’ll have to work for Clinton?

But that I don’t mean that he doesn’t care whether Trump becomes president, as I’m sure he’d be appalled by the prospect. But what he doesn’t care about is the normal rules of the political game that anyone that had spent their professional lives working as a member of one of our two main political parties would understand. Though the term socialist has been bandied about as a defining term for Sanders by some of his detractors, it has been dismissed as just an adjective by most observers as he gained support in his upstart and hugely successful challenge to the frontrunner. But it matters not just because he holds to an absurd Marxists worldview that is made clear in economic pronouncements that are as simplistic and wrongheaded as Trump’s patent nostrums about other policy issues. It matters because he hasn’t spent his life working to build the Democratic Party. To the contrary, though he has embraced the label this year, he still doesn’t see himself as a standard-issue Democrat.

While people like the Clintons and other members of the Democratic establishment that support them view themselves as idealistic liberals who are embracing the responsibilities of power, Sanders sees them as tools of a system he still despises. He may recognize the distinction between the two party establishments to some extent but in his eyes, that difference doesn’t amount to much. If he is willing to risk Democratic unity and even contemplate trying to use his delegates to turn their Philadelphia convention into an open and unseemly brawl rather than the usual nominee infomercial it is because he has no loyalty to the party as an institution or to the notion that American politics is strictly a binary choice between two labels.

Seen from that perspective, the danger from Sanders must be recognized by establishment Democrats as more than just a pesky insurgency. He is not a member of their club and shouldn’t be expected to act like one. While we don’t know exactly what he’ll do in the coming months, playing ball with Hillary is the last thing on his mind. He intends to go down fighting and if that means doing “harm” to Clinton, as a shocking New York Times headline from earlier this week reads, then so be it.

If Hillary doesn’t know it already, she should have figured out that she is running against a socialist, not a fellow Democrat. With that in mind, Clinton should be worrying right now about Sanders as much as Trump. What he does next and how far he is willing to do to keep this fight going as long as possible may have a serious impact on what happens in November. 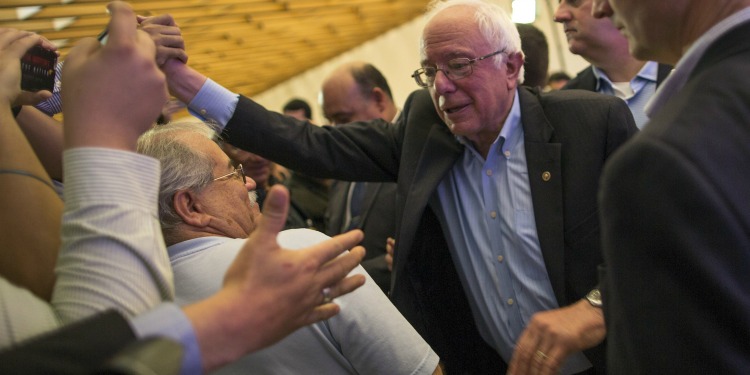