Like the effort to force recounts in swing states won by Trump, the attempt to persuade the Electoral College to see the president-elect as part of a Russian plot or to channel The Federalist Papers and pick someone else flopped. So now that the fantasies that the bad dream can be made to go away are exploded, what are Democrats who are still refusing to accept they lost to do?

The answer from the left is “resistance.” That’s what Moveon.org — which helped organize some of the protests at the various Electoral College ceremonies as well as other anti-Trump demonstrations — is saying. What form will “resistance” take? That’s far from clear. The group’s leader Anna Galland seems to be primarily interested in more mass street theater. According to radical TV talker Keith Olbermann, it should consist of daily reminders to Republicans that Hillary Clinton won the popular vote and refusing to refer to Trump as the president.

Such comically futile gestures don’t sound terribly inspiring or productive, but might make some people feel better. Yet those elected officials tasked with the duty to reconstruct the Democratic Party sound just as confused as nudniks like Galland and Olbermann.

A small number of centrist Democrats like Ohio’s Rep. Tim Ryan, who led a spectacularly unsuccessful challenge to House Minority Leader Nancy Pelosi, think the party should try to cooperate with Trump on issues where they might agree. But that’s something a party increasingly dominated by its Bernie Sanders/Elizabeth Warren leftist faction has no interest in doing. Ellison, who is continuing his effort to be elected the head of the Democratic National Committee, believes the party should refuse to support the infrastructure proposal in spite of the fact that it is remarkably similar to President Obama’s own first term stimulus legislation. While his hopes to be the DNC Chair are still up in the air, he probably speaks for most of his party when he says they don’t trust Trump and will resist him on every front.

The point here is not so much their understandable hard feelings about the election results. Rather, it is that they are still stuck in the denial stage of grief and can’t shake it off. Though they’ll pay lip service to the notion of serving the best interests of the country, there’s little doubt that they are far more interested in continuing the project to delegitimize Trump. That’s why so many of them continue to harp on the farcical notion that Vladimir Putin elected Trump or to hope some other Hail Mary play like parlaying disputes over the president-elect’s admittedly tangled and far-flung financial interests into an impeachment putsch even before he takes office will do the trick.

What this means is that rather than a fraction of the party’s extremists starting the new administration enmeshed in a new derangement syndrome, it appears the critical mass of the party that won 48 percent of the vote is unable to move past a disappointing election.

That’s a critical mistake not so much because it is unproductive—which it is—but because it allows Trump look like a relative moderate. After a year of warning the country that Trump was a threat to democracy who would never respect the process, it turns out that it was the Democrats who have been the sore losers and unwilling to pull together for the good of the country. If, as is likely, the bulk of the Democratic Party continues to act as if Trump is not a legitimate president who won a free and fair election, then they will be the ones who are marginalized. Barack Obama profited politically from being able to depict the GOP as obstructionists. The same will be true for Trump. Just as devastating will be the internal battles this dynamic will generate as the Democratic base will be frustrated with their Congressional leadership that will never be able to be tough enough on Trump to satisfy them much as was the case for Republicans and Obama.

As angry as he may be with the carping from the left and slights from people like Bill Clinton about the Russians and the FBI’s role in his victory, Trump should be thrilled to see Democrats refusing to acknowledge that he is their president. The longer it takes for Democrats to get over the 2016 election and to begin to offer a forward-looking alternative that addresses the reasons why they lost, the better it will be for his new administration. 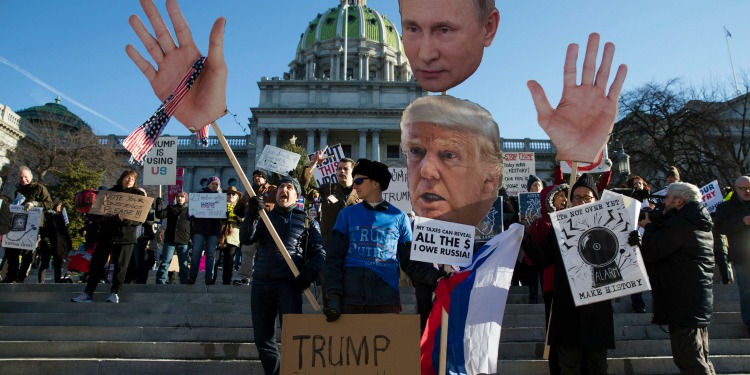