The Olympics provide the media with an endless number of feel-good stories. Whether it concerns a dominant athlete in her prime, like swimmer Katie Ledecky, a veteran returning to make good, like Michael Phelps, or the endless number of unlikely underdogs who win hearts by just showing up, the two-week show provides even non-sports fans with the sort of drama they like. The Olympics are, like the Super Bowl, the rare piece of sports programming that many non-sports enthusiasts will watch. That’s why NBC paid a whopping $7.75 billion to the International Olympic Committee for the rights to broadcast both the winter and summer games from 2022 to 2032. The tab for the current edition going on in Rio was $1.23 billion for the one event. NBC wouldn’t be paying that much money if it weren’t confident that the two-week show would be intensely popular.

But while I love sports, I hate the Olympics. Why?

The answer came again in part from two incidents that marred the first days of the competition. In one, the Lebanese Olympic team refused to share a bus with the Israeli team. Despite their obligation to abide by transportation schedules, in a reverse Rosa Parks moment the Lebanese team physically blocked the entrance to the vehicle to prevent being tainted by the spectacle of rubbing shoulders with representatives of the Jewish state. Officials shunted the Israelis who were turned away to other buses. In the other, a Saudi judo athlete forfeited a match against an Israeli competitor. Whether it was done out of pure prejudice or merely a desire to avoid the humiliation of losing to a Jew, the effect was the same. Once again, another Olympics was marred by incidents of anti-Semitism and in which the small Israeli delegation was singled out for ill treatment.

In response, supporters will say it is not fair to use two isolated incidents to tar the entire Olympic movement. Even if one points to the long history of awful events that shouldn’t taint the selfless dedication of the athletes, the splendor of their achievements, the emotion of the playing of the anthems at medal ceremonies, or even the moving nature of the opening and closing of each Olympics. One can, they argue remember the 1972 Munich massacre and deplore the manipulation of the Olympics by tyrannical hosts such as Nazi Germany, China, or Russia without trashing the concept of a quadrennial international sports event dedicated to peace and fair competition.

My response is that even if you love the spectacle and can get past the odd notion that we’re supposed to dedicate two weeks of our lives to caring about sports that we ignored for the previous 48 months, you can’t separate what’s good about the Olympics from what’s bad. No matter how much you buy into all that pious pabulum about replicating the ancient Greek Olympic truce or how choked up you get when you hear them play your national anthem after one of your countrymen wins, mixing politics with sports is always bad.

So long as the essence of the Olympics is flag-waving nationalism there’s no way to get away from the nasty side of international sports. In that sense, the Olympics is always doomed to be the sports equivalent of the United Nations when it comes to Israel. But Israel is just the tip of the political iceberg. Patriotism is a worthy sentiment but when it gets mixed up with sports, it is as likely to produce something ugly or misleading as praiseworthy.

Let’s understand that playing for your country is not a form of serving it, despite the hokum we hear at every Olympics. Even memorable victories over teams from countries whose governments are recognized as bad—such as the 1980 ice hockey victory by the underdog U.S.A. team over the mighty squad from the Soviet Union—produce results that distort the truth. That game was no more a coherent response of the West to the Russian invasion of Afghanistan than were Jesse Owens’s victories in Berlin  to the Nazis in 1936, and the illusion to the contrary held by so many did no one any good. Athletics are a glorious tribute to the human spirit but, so long as they are enmeshed in nationalism, these events will continue to be manipulated by bad actors and result in more harm than good.

If anybody were truly interested in holding an international sports competition that might break down barriers rather than strengthen them, there would be no national teams, flags, and anthems to stir up emotions that can be manipulated to promote hate. That way we could honor what is truly praiseworthy about the games—the effort of the athletes—without confusing it with other things that ought to have nothing to do with sports. That’s why I think professional sports—which the originally “amateur” Olympians used to look down on—are actually more laudable. The best pro teams in major sports, whether it is soccer or baseball, have international rosters. In that sense pro teams like FC Barcelona or the New York Yankees, whose great players can hail from places as diverse as Brazil or Japan rather than just Spain or the United States, do more to bring us together than all the breathless idealism we’ll hear repeated over the next two weeks on NBC.

So spare me the hoopla about rhythmic gymnastics, synchronized swimming or even the more popular events. The Olympics may be popular—and in many instances represent the most advanced competition in some sports—but I want no part of it even if there were more things in it that I cared about. The Olympics are a big business and an impressive spectacle. But they remain bereft of the intrinsic moral value everybody pretends they possess and promote a fraudulent brand that is—like the UN—more hypocritical global baloney than anything else. 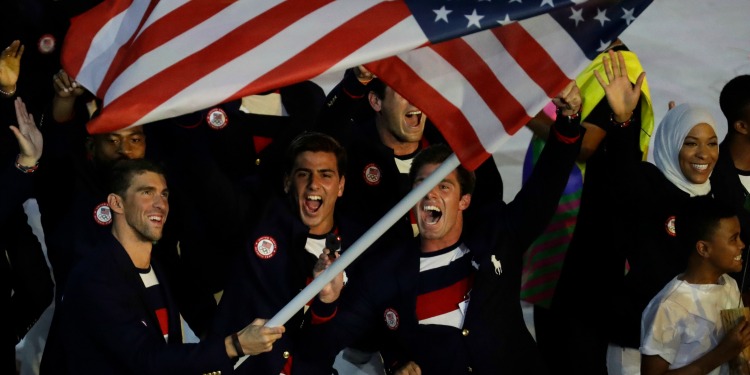