Senator Bob Corker went to Trump Tower today to pay court to the new leader of his party and the meeting engendered some understandable speculation from political observers. Was the chair of the Senate Foreign Relations Committee under consideration for the Republican vice presidential nomination? Is he a potential secretary of state in a Trump administration? We don’t know the answer to those questions, but it is reasonable to infer from Trump’s apparent comfort with Corker that either post is a possibility for the Tennessee senator. Whether or not Corker gets tapped for veep or the State Department, his influence raises some interesting questions about the future of American foreign policy in a putative Trump administration.

On its face, Trump making nice with a pillar of the Republican establishment in the Senate makes sense. If Trump is looking, as he says he is, for someone who knows how Congress works and can deal with the powers that be, Corker was always going to be among those looked at as being able to fill the bill. He is a generally considered a moderate Republican with a good relationship with most of his colleagues and somebody who works well with Democrats.

But the real reason why Corker is suddenly so cozy with the Donald is that he was among the first members of the GOP establishment to start publicly drinking the Trump Kool-Aid. While most Republicans reacted to Donald Trump’s first major foreign policy speech with incredulity if not open dismay, Corker gave the candidate’s incoherent and largely inconsistent triptych an enthusiastic “atta boy.” But in doing so, he said more about himself and his most important acts during his tenure at the Foreign Relations Committee than about Trump.

In endorsing Trump’s speech, Corker did more than grant a patina of respectability to the mantra of “America First,” in which the presumptive GOP nominee provides a rationale for the xenophobic fear mongering that he has been spouting since last summer. He also wholeheartedly embraced the notion that what he called the “foreign policy establishment” needs to be overturned and replaced.

What exactly does that mean? Answering that is as difficult as parsing Trump’s policy prescriptions that embraced at one and the same time, trade wars, an abandonment of American allies and alliances like NATO, appeasement of Russia, withdrawing from the Middle East while also tearing up the Iran nuclear deal, and “kicking ISIS’s ass.”

But one thing we do know about it is that it explains some of Corker’s otherwise puzzling behavior last year while being the putative leader of the opposition to that same nuclear deal in the Senate last year. It was Corker, more than any other senator, who laid the groundwork for the defeat of efforts to stop the pact by agreeing to Democratic demands that a vote on the deal would allow it not to be treated as a treaty which the Constitution demands requires a two-thirds vote for ratification. The result of Corker’s machinations was that the most important foreign treaty negotiated by the U.S. since the fall of the Berlin Wall was able to pass via a Senate filibuster.

During the course of the negotiations over that bill as well as the debate over the bill later in the year, Corker gave us an illustration of why an ability to work with people on the other side of the aisle isn’t always a virtue. At the time, it appeared that the Democrats and President Obama were playing Corker like a piano at every stage of the battle over the administration’s successful effort to grant international legitimacy to Iran’s nuclear program while making it a near certainty that it would get a weapon once the weak agreement expired in a decade. When Trump and other Republicans complained in the last few months about what a terrible deal the U.S. got with Iran, they also needed to acknowledge that among the guilty men who did the most to ensure this terrible bargain wasn’t stopped was a member of their own party.

The irony was that the biggest break Obama got in spiking opposition to his signature foreign policy achievement was the Republicans’ capture of the Senate in 2014, which meant that Corker moved up to the chairmanship of the Foreign Relations Committee. Until then New Jersey Democrat Bob Menendez, who was probably the fiercest opponent of the president’s Iran policy in the Senate, had led the committee. Menendez’s relegation to ranking member and then his defenestration due to a timely Justice Department ethics charge resulted in his replacement by the more accommodating Ben Cardin. Neither Corker nor Cardin was eager to confront the president on Iran and what followed during 2015 illustrated what it means when the White House has pliable partners on the Hill.

It was difficult for many Republicans to explain Corker’s behavior. One possible answer was that he was just a fool who was easily manipulated both by his Democratic partners as well as by the White House propaganda machine on Iran that Ben Rhodes has been bragging about recently. But if Corker agrees with Trump’s “America First” blather, then it is also possible that he just wasn’t that upset about the nature of the deal he was lying down for. Of course, Corker said he was against the deal even as he was helping it pass. But just as Trump’s condemnation of the pact as a terrible deal doesn’t square with his neo-isolationist unwillingness to confront Iran in the Middle East, there is some method to the inconsistent madness. Both men are so eager to disavow a more interventionist foreign policy that they are forgetting or just indifferent to the fact that their retreat will aid Iran’s dangerous push for regional hegemony.

The fact that Obama’s patsy is now Trump’s best pal makes sense because, once you discard the obligatory condemnation of the president in Trump’s pronouncements, there is, in some crucial respects, no real difference between their foreign policies or their hubristic faith in the magic of their own personalities.

There may well be other, wiser influences on Trump if he wins in November. Or at least otherwise sensible Republicans who are being good partisan soldiers and lining up behind their party’s candidate ought to hope so. But Corker’s place in Trump’s inner circle, if that’s where he is these days, is as troubling as the inconsistencies in his foreign policy address. 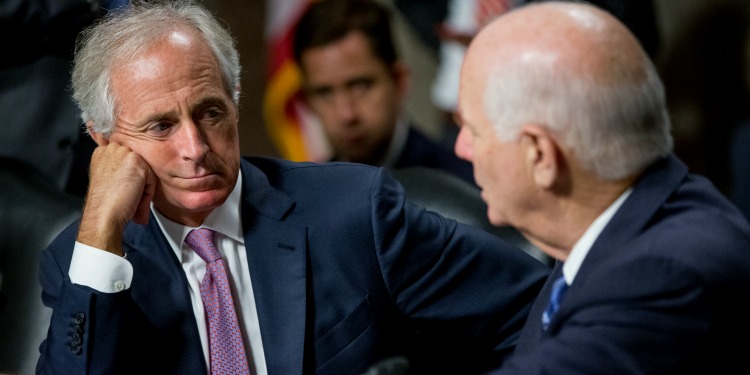