When advocates of Middle East peace proposals speak of the future of Jerusalem, the discussion always centers on guarantees of freedom of worship for all faiths at the holy places. The assumption is that peace and presumably a re-partition of the city will ensure that these sites are open to all and that the end of the “occupation” will mean that Muslims, Jews, and Arabs will share the city in harmony. But while peace processors are always telling us that the real obstacles to coexistence are Jewish settlements or the failure of the leaders of the two peoples to take risks, the problem is actually much more simple. One side of this conflict has consistently demonstrated their willingness to compromise and share; the other has not.

Another illustration of this conundrum was on display this week as Palestinians rioted on the Temple Mount. The police were subjected to barrages of rocks, as were Jewish worshippers below the sacred plateau at the Western Wall. The result of these violent demonstrations was that Muslim extremists got their wish. The Temple Mount, the most sacred place in Judaism as well as important to Christians, was closed to non-Muslims who wished to visit.

Eventually, Israeli authorities in cooperation with the Jordanian government (which has attempted to exercise some influence over the Muslim Wakf that administers the Temple Mount) will re-open the site. But it’s important to understand that this is far from an unusual event and that the violence reflects the long-term goals of both the rioters and the Palestinian Authority.

After Jerusalem was unified during the 1967 Six Day War, the Israeli government sought to send a message to Muslims that their holy sites would not be threatened by the change. They let the Temple Mount, home to the Al Aksa Mosque, the third holiest Muslim shrine, remain under the rule of the Wakf. Israeli governance over the united city was the first time in history when freedom of worship for all faiths at the holy sites was guaranteed. But the one exception was that a ban on Jewish prayer on the Mount — the site of the ancient holy temples of Jerusalem — was instituted and strictly enforced by Israeli police.

A small minority of Jews would like to see that ban lifted, but it remains in force. Yet not content with that restriction, Muslims on the Temple Mount have begun a campaign of intimidation directed at non-Muslims tourists who are permitted to walk around the plateau under escort. That harassment has now escalated to rock throwing. Far from acting on their own, the thugs use the mosques on the Mount, which are generally off-limits to police, as staging areas for their assaults. As has sometimes happened in the past, when they were able to gain control of the plateau, rocks have been thrown down on the Western Wall Plaza, resulting in injuries to worshippers there.

What’s the point of this violence?

In part it is a reaction to the canards being circulated by the Palestinian Authority and its leader Mahmoud Abbas that allege Israel intends to harm the mosques on the Temple Mount. That there are no such plans and that, in fact, the Israelis are enforcing a discriminatory rule intended to placate Muslims, has had no impact on the spread of these myths. Just as Arab leaders used similar stories about Jewish plots to incite pogroms against Jews in the 1920s and 30s, so, too, has Abbas helped to incite the current “stabbing intifada” in order to compete with his Hamas rivals for the support of the Palestinian public.

But the agenda behind the lies about Israeli plots goes deeper than the Fatah-Hamas rivalry. As Abbas and Hamas leaders have often made clear, neither group recognizes the legitimacy of Jewish historical claims in Jerusalem. Abbas helped engineer a UNESCO ruling that treated the Temple Mount and even the Western Wall as sites that were solely Muslim. Their ultimate goal isn’t so much to enforce the current discriminatory status quo that exists in Jerusalem as it is to go back to the pre-June 1967 situation where Jews were altogether banned from visiting the Temple Mount and the Wall.

Surely such an outcome is unthinkable and peace deals that speak of freedom of worship would never countenance a return to that sort of blind prejudice. But if Muslim violence can effectively create a ban on non-Muslims entering the Temple Mount, a place to sacred to all the monotheistic religions, while the city is under Israeli rule, why would anyone think Jewish rights or those of Christians would be protected were the city t0 be re-divided?

As we have seen with Abbas’s anti-Semitic statements about Jews poisoning Palestinian water and his praise of terrorists who wish to prevent holy sites being profaned by “stinking Jewish feet,” the notion that the dispute is primarily one about territory or settlements has been proven false. The century-old war on Zionism has always had at its core a degree of intolerance for the Jewish presence and a desire on the part of Arabs to erase Jewish history. The rocks being thrown on the Temple Mount are a product of hate, not a misunderstanding about where the borders between two states should be drawn. They are a symbol of a conflict that can only be resolved when the Palestinians give up their dreams about a return to an era of discrimination against Jews. 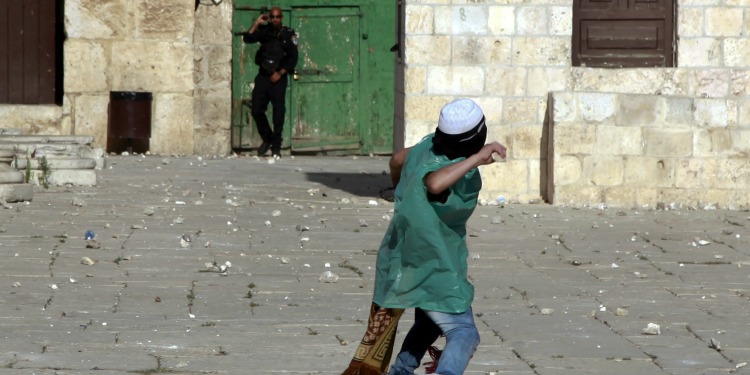