Tomorrow, the U.S. Supreme Court will hear arguments in the case of Whole Woman’s Health v. Cole, which pits abortion providers in Texas against the state government. It’s a battle over legislation that required clinics in the Lone Star State to meet the same building, equipment, and staffing standards required by hospital surgical centers, as well as insisting that doctors that work there have admitting privileges at a local hospital. Supporters of the clinics say this will force many of them to go out of business, thus depriving women of the ability to have an abortion in parts of the state. To the state, these are reasonable restrictions that aim at protecting the health of patients in an industry that was rocked by scandal in recent years. The U.S. Court of Appeals for the Fifth Circuit ruled in favor of Texas last June, and now the highest court in the land will have its say.

Due to the death of Justice Antonin Scalia, only eight justices will hear the case. But if the vote ends with the four conservatives being tied by the four liberals, it will be a victory for Texas since that would mean that the appellate court ruling would be affirmed. That means the pro-abortion or pro-choice (depending on what you think about the issue) side needs to peel away at least one conservative, and the obvious candidate is Justice Anthony Kennedy, who has often been a swing vote during his time on the court.

As the New York Times reports, in order to persuade Kennedy to side with them, supporters of the clinics have flooded the court with supporting briefs that contain the testimony of more than 100 women, including some celebrities, arguing that having an abortion was important to their lives. They say their willingness to talk about the procedure is as much about changing the idea that an abortion is a shameful secret as anything else. But their objective is to convince Kennedy, whose vote in the 1992 Planned Parenthood v. Casey ensured that Roe v. Wade survived an important challenge, that the Texas case is about preserving the right to abortion.

But instead of arguing about law, they are trying to pluck at his heartstrings in much the same way that advocates of gay marriage seemed to do when he cast a crucial vote in Obergefell v. Hodges that invalidated state laws that prohibited gay marriage. His majority decision was lauded by liberals for its attempt to scale the heights of rhetoric about marriage. But pro-abortion groups also remember his vote in the 2007 Gonzales v. Planned Parenthood case in which he upheld a ban on partial-birth abortion and did so with a paean to respect for life and “the bond of love a mother has for her child.” By telling the stories of women who had abortions and don’t regret them, they hope that will provoke another emotional response from the judge that will help their side.

It’s impossible to say whether the tactic will work since trying to figure out how Kennedy or even Chief Justice Roberts will vote on any case is a risky business. The briefs may, as some sources for the Times article claim, alienate him, especially since the texts seem to paint abortion in the most joyful manner possible. But given his susceptibility to emotional arguments in the past, you can hardly blame them for trying.

But however Kennedy winds up voting, the competition between pro and anti-abortion advocates for the judge’s sympathy reminds us of what was so important about the late Justice Scalia.

Scalia was a man of strong opinions and principles, which often led him to dissent from what he believed, was judicial overreach as much as he was able to join with the other conservative justices. But above all, Scalia believed in both originalism and textualism. Which is to say that he believed that the intent of the framers of the Constitution was of paramount importance. He also thought that the laws meant what they said and not what subsequent judges wanted them to say.

Which is to say that arguing the legality of imposing health restrictions on abortion clinics ought to be about whether Texas’s law was constitutional and not about whether a famous actress believes having an abortion was the right thing to do when she was in college.

To those who see the law as merely a vehicle to get their way on any social or political issue, Scalia’s punctiliousness is irrelevant to their concerns. They want the Texas law to be ruled unconstitutional because they think any restrictions on abortion clinics are the thin edge of the wedge heralding the eventual overturning of Roe v. Wade. That the original Roe ruling permitted all sorts of restrictions on abortion is beside the point. Like the National Rifle Association’s opposition to even the mildest gun control laws or background check provisions, because they see them as an attack on the Second Amendment, pro-abortion groups view anything other than abortion-on-demand up until the moment of birth as a similar threat. With regard to health standards, the abortion industry has determined that the nationwide push for higher standards in their clinics in wake of the butchery revealed in the Gosnell murder case (in which a Philadelphia doctor killed a patient with neglect while performing illegal late-term abortions in which infants that had been delivered live were killed) must be stopped no matter what the cost.

But whether or not we are moved by the testimony of the women who defend their abortions or listen to others who worry about the lessons of the Gosnell case, Scalia would remind us that advocacy that focuses on sympathy rather than legal texts and constitutional principles is antithetical to the notion of the rule of law.

The debate about whether abortion can or should be restricted is something for the legislative branches of government, whether it be the U.S. Congress or at the state level, to decide. But one doesn’t have to have a side in that fight to understand that when judges are focused more on emotion than the Constitution, the latter and the American justice system are not well served. When that happens, the decisions are, as Scalia would have said, “applesauce,” rather than a defense of the Constitution as judges either make up new rights that aren’t in the document or ignore those they find inconvenient.

The Texas case should be decided on the law and not whether an actress thinks her abortion was a good or a bad experience. No matter how the eight-person court rules, let’s hope they honor Scalia’s memory with a decision that upholds his belief in textualism as much as anything else. 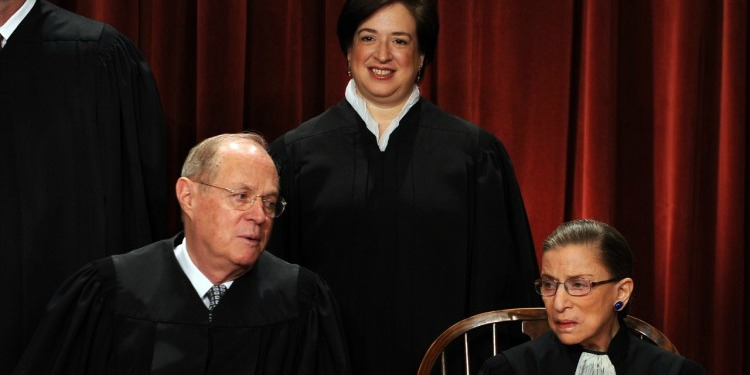