Roseanne is poor again. That’s good news for her, and for ABC: Nearly 30 million people now have watched the first episode of her rebooted blue-collar sit-com. Roseanne’s writers have decided to more or less laugh away the strange last season of the original series, in which television’s Roseanne Conner, like the real world’s Roseanne Barr, had become fabulously wealthy and spent 20-odd shark-jumping episodes exploring the high life before revealing that it was . . . all a fantasy. John Goodman’s Dan Conner, who was dead in that timeline, has, Spock-like, been resurrected.

Roseanne was always the weakest part of Roseanne: Goodman went on to become one of the irreplaceable actors of his time, occupying at least a half-dozen roles in which it is now nearly impossible to imagine any other performer. Laurie Metcalf has enjoyed a distinguished career as well (she left audiences crying ugly as a neurologist suffering from dementia in The Other Place), and Sara Gilbert hit a double as a cast member on one of television’s most popular sit-coms and the creator of a popular daytime talk show. Roseanne, on the other hand, has mostly been stuck being Roseanne, an artist incapable of getting beyond herself. (“Poetry is not a turning loose of emotion,” T. S. Eliot wrote, “but an escape from emotion; it is not the expression of personality, but an escape from personality. But, of course, only those who have personality and emotions know what it means to want to escape from these things.”) And just as the original run of the show was shaped by her personal bugaboos—the challenges of working-class life at first, and then those of the celebrity life—the reboot so far has been informed by Barr’s nonfiction experience as an out-and-proud Trump supporter in Hollywood.

The politics are, as one would expect, pretty shallow. Metcalf’s Jackie shows up wearing a pussy hat and a “Nasty Woman” T-shirt, while Roseanne explains that she was attracted to Trump because “he talked about jobs,” as though that were something unusual in a presidential candidate. (One of the most maddening aspects of American political discourse is politicians’ insistence on talking about jobs as though they were ends rather than means. We don’t have farmers so that people living in rural areas can have incomes and something to do all day—we have farmers so that we can have food.) The show promises to touch on health care, aging, opioid abuse, and other highly marketable social issues. The Conner family is now multiracial and includes one gender-nonconforming member, and it soon will “have a different culture moving in next door,” as Barr puts it.

Barr is a rich woman who plays a poor woman on television. Donald Trump is a rich man who plays an even richer man on television. That they should be united in a self-consciously class-oriented political proposition is less surprising than it may seem. Barr’s blue-collar shtick—“See, I’m just like you, so you can trust me!”—is a complement to Trump’s pluto-populist shtick—“See, I’m so rich that I am effectively incorruptible, so you can trust me!” Trump’s Brioni suits (expensive but off-the-rack: Bespoke tailoring is only for the “oddly shaped,” he insists) and overlong neckties extending genitally down his thigh are no less a costume than the Conner family’s Walmart-couture outfits—and Trump, it is worth keeping in mind, is no less a television performer than Barr. (He made a lot of money from The Apprentice, just as he lost a great deal of money in such off-air ventures as his hilariously inept casino business in Atlantic City and his catastrophic and short-lived ownership of the Plaza.) What Trump and Barr have in common is the blurring of the line between reality and entertainment. Neither is quite identical to the associated television fiction nor quite distinct from it.

The performance of class in American politics is practically medieval in its attention to unwritten sumptuary laws and subtle markers of social gradation. Consider the evolution of Barack Obama. In 2008 he was, like all non-incumbent presidential candidates, a little bit of a bumptious populist—or, at least, he played one on television, like Roseanne Barr and Donald Trump. That was back when he claimed to be opposed to same-sex marriage: “Marriage is between a man and a woman,” he explained, a view he said he derived from “my faith.” He wore a populist’s uniform back, then, too, opting for modest Hart Schaffner Marx suits, a favorite of politicians because they offer a made-in-the-U.S.A. option, and we good American populists can’t have dirty foreigners putting their grubby paws on our clothes. He sported an inexpensive Jorg Gray wristwatch—restrained, but a step up from Bill Clinton, who wore a ridiculous digital Timex Ironman with his salaryman suits, the clumsy symbolism of which was impossible to miss. But once he was safely burrowed in, Obama evolved, and not just on the question of same-sex marriage. After that first election, his off-the-rack suits were replaced by custom-tailored ones from Martin Greenfield and the late George de Paris, who knew something about moving around the American class system: Before he was George de Paris, he was Georgios Christopoulos of Kalamata, a penniless immigrant. Sartor resartus!

By the time Obama’s vegetative official portrait was unveiled, that Jorg Gray timepiece had been supplanted by a tasteful Rolex Cellini. Obama was following a well-trod path: Bill Clinton, who has a taste for the finer things and a splendid fortune with which to acquire them, is an enthusiastic collector of high-end wristwatches, including an A Lange & Sohne Grosse Langematik Gangreserve in platinum, one of only 100 in existence. Obama’s Rolex is more discrete than the big gold one favored by Dwight Eisenhower, but, the cultural realities being what they are, a black man running for president probably had to be even more conscientious in avoiding flashiness than Eisenhower or an old-line WASP like George H. W. Bush would have. Republicans lost their minds when Obama wore a perfectly appropriate tan suit to a daytime event, and they made a lot of ruckus about Michelle Obama’s taste for haute couture and her entirely unremarkable travel budget.

Hollywood and Washington both trade on the tension between the public’s desire for the rich and famous to be just like us and its desire for them to be exotic. Hence the preposterous tabloid storylines (poor Jennifer Aniston just couldn’t get a date for 20 years!) and the ritual humiliation of celebrities gone moldy. And hence the odd social codes of Washington, in which the man who wins the national contest for ordinary guy you’d most like to have a beer with moves around town in a gaudy mechanized procession that’s one part Roman triumph, one part Normandy invasion, and one part Barnum & Bailey circus.

It’s a funny scene, and Americans interested in the social condition of the white working class cannot quite decide where to turn their eyes: toward Roseanne or Trump, toward Hollywood or Fifth Avenue. 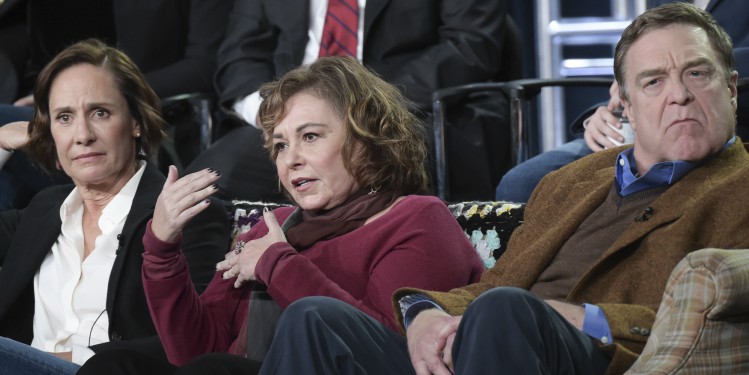