The White House is sensitive to charges that the president is conducting an “apology tour” of the world. And it’s true that on Tuesday the president didn’t actually apologize in Laos for American actions in the 1960s, but he danced right up to the line.

This is what he said:

Over nine years — from 1964 to 1973 — the United States dropped more than two million tons of bombs here in Laos — more than we dropped on Germany and Japan combined during all of World War II.  It made Laos, per person, the most heavily bombed country in history.  As one Laotian said, the ‘bombs fell like rain.’  Villages and entire valleys were obliterated.  The ancient Plain of Jars was devastated.  Countless civilians were killed.  And that conflict was another reminder that, whatever the cause, whatever our intentions, war inflicts a terrible toll, especially on innocent men, women and children.  Today, I stand with you in acknowledging the suffering and sacrifices on all sides of that conflict.

He went on to pledge to double U.S. funding, to $90 million a year, to help Laos defuse bombs dropped during the Vietnam War. The problem is a very real one, as I discovered for myself while visiting Laos’s Plain of Jars a few months ago—a tourist site but one where tourists are still warned to look out for unexploded ordnance. Everything Obama said was factual, and there is nothing wrong with his desire to aid Laos—the U.S. needs as many friends on China’s borders as it can find. But his rhetoric was nevertheless one-sided and disappointing.

What was lacking, above all, was any context. Someone who listened to Obama’s speech and knew nothing of Laos’s history would have been left mystified about why the U.S. dropped bombs “like rain” on that country. Did Americans harbor irrational fear and prejudice of Laotians? Were the Johnson and Nixon administrations motivated by racial prejudice? Perhaps they were simply staffed by psychopaths and war criminals who enjoyed annihilating small countries?

What Obama did not mention was that in 1959, preparatory to its invasion of South Vietnam, North Vietnam invaded Laos in order to establish a major segment of the Ho Chi Minh Trail bringing weapons, supplies, and manpower from North to South. North Vietnam also sponsored and supported with its own troops a Communist insurgency, the Pathet Lao, to overthrow the Royal Government of Laos. The U.S. responded to this Communist aggression—conducted in violation of the Geneva Accords of 1954 and 1962—by providing covert and overt aid to the government of Laos and to Hmong militias who were fighting the Communists. Unlike in South Vietnam, the U.S. did not send combat troops to Laos; instead it relied on the CIA and the Special Forces to fight a “secret war” utilizing Laotians who were determined to resist Communist domination. The most capable American-supported leader was Vang Pao, a Hmong tribesman who was a general in the Lao army. Eventually he led as many as 40,000 guerrillas fighting the Pathet Lao and the North Vietnamese Army.

The U.S. bombing of Laos was conducted in support of Vang Pao and other anti-Communist fighters and as part of a general effort to disrupt the Ho Chi Minh Trail—the logistics line that enabled aggression against a sovereign state allied with the United States. Those interested in learning more should read my colleague Joshua Kurlantzick’s excellent forthcoming book A Great Place to Have a War: America in Laos and the Birth of a Military CIA (out in January from Simon & Schuster).

It is certainly possible to question the utility and even the morality of U.S. bombing in Laos—but it is highly misleading for any analyst, much less the president of the United States, to criticize the U.S. in a vacuum without noting the actions of the North Vietnamese and the Pathet Lao who killed countless numbers of Laotian civilians, violated Laotian sovereignty, and ultimately overthrew the internationally recognized government of Laos in order to impose a Communist dictatorship. That dictatorship continues to rule to this day, by the way. It has made some economic reforms primarily to encourage tourism, but it remains a dictatorship that is rated “not free” by Freedom House.

To his credit, Obama did speak out about human rights during his trip although in a particularly mealy-mouthed way. He never directly criticized Laos’s human-rights record, which is poor. He never highlighted the plight of dissidents or called for democracy. Instead he spoke in oblique terms about the importance of human rights while making clear that they are not very crucial in the U.S.-Laos relationship: “As we do around the world, the United States will continue to speak up on behalf of what we consider universal human rights, including the rights of the people of Laos to express yourselves freely and decide your own future. Yet even as our governments deal candidly with our differences, I believe, as we have shown from Cuba to Burma to Vietnam, the best way to deliver progress for all of our peoples is by closer cooperation between our countries.  And that’s why, today, the United States and Laos have agreed to a new comprehensive partnership to guide and deepen our relationship for years to come.” In other words, while saying he would speak out on behalf of human rights, Obama did not really do that.

I get what Obama is up to here. He thinks the U.S. can exercise more influence today by acknowledging past “misconduct” without directly criticizing the behavior of countries it deals with. The problem is that, in practice, this amounts to kow-towing to dictators from Cuba to Iran and buying into their fiction that the U.S. is guilty of conduct just as bad, if not worse, than what they have done. That simply isn’t true, and by shading the truth the president is failing to speak on behalf of the principles upon which the United States was founded–and which have long been our most powerful tool and selling point in international affairs. He is also inadvertently buttressing the dictatorships he is dealing with; now they can turn to their people and say in essence, “Our problems are America’s fault–the president of the United States even said so.” What we have seen during the two terms of the Obama presidency is that by failing to speak out more robustly on behalf of freedom, the president is not winning any friends; he is simply convincing the world’s dictators that he is a patsy who can be pushed around with impunity. 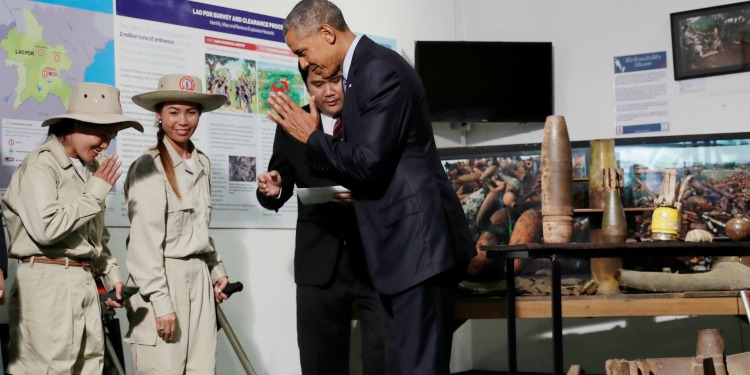