Ben Rhodes, a 38-year-old former creative writing major, has emerged as one of President Obama’s closest foreign policy aides in spite of his almost complete lack of any qualifications in international relations, defense, area studies, or any related field. As deputy national security adviser, he travels with the president, sees him all day long, and not only writes his speeches and communications strategies but also shapes the content of policy.

As an eye-opening New York Times Magazine article by David Samuels notes, he is “the single most influential voice shaping American foreign policy aside from POTUS himself”–a judgment that will no doubt rankle National Security Adviser Susan Rice and Secretary of State John Kerry but that is probably accurate. So close are they that Rhodes is said by his colleagues to have a “mind meld” with the president.  “I don’t know anymore where I begin and Obama ends,” Rhodes himself says.

So it is worth parsing closely this high-revealing profile of the callow young man who is in de facto charge of American foreign policy. For a start he obviously shares with his boss a predilection for overly revealing on-the-record interviews. American allies were shocked in April to read Obama’s disparagement of them in an interview with Jeff Goldberg of The Atlantic. Just as embarrassing are the revelations in the Samuels piece.

Most of the initial reaction has focused on the revelations about how Rhodes has manipulated the facts to sell the Iran deal. Samuels notes, for example, that the administration claimed that the nuclear talks got under way in 2013 because of the election of a supposed moderate, Hassan Rouhani, as Iran’s president. This “was largely manufactured for the purpose for selling the deal,” he writes. The reality is that Obama was “eager to do a deal with Iran as far back as 2012, and even since the beginning of his presidency.”

Moreover, the administration claimed that the deal would help “moderates” in Iran to oppose a “hard-line” faction even though Leon Panetta, Obama’s former CIA director and secretary of defense, is quoted as saying that the CIA analysis did not support the contention that the “Iranian regime was meaningfully divided between ‘hard-line’ and ‘moderate’ camps.”
There is much more along these lines in the article, including Rhodes’ boasts about how he feeds the White House propaganda line to Washington journalists who faithfully parrot his talking points.

But what really struck me about the article is the supreme arrogance that grips this White House.

That is an occupational hazard in any White House, of course, but Obama and his closest aides take it to a new level. Samuels repeatedly notes that Rhodes has “contempt” and “aggressive contempt” for “anyone or anything that stands in the president’s way” and for “the groupthink of the American foreign-policy establishment and its hangers-on in the press.”

The story notes that Rhodes “referred to the American foreign-policy establishment as the Blob. According to Rhodes, the Blob includes Hillary Clinton, Robert Gates and other Iraq-war promoters from both parties who now whine incessantly about the collapse of the American security order in Europe and the Middle East.”

Rhodes has particular contempt, of course, for the architects of the Iraq War: For Rhodes, Samuels writes, “the Iraq war was proof, in black and white, not of the complexity of international affairs or the many perils attendant on political decision-making but of the fact that the decision-makers were morons.” Rhodes, like the president, returns to the Iraq War time and again: “Iraq is his one-word answer to any and all criticism.”

I could understand, if not endorse, this mindset if this article were about what Rhodes was like when he first entered the White House in 2009. But now it’s seven years later and it’s pretty pathetic to imagine that his–and Obama’s–opposition to the Iraq War inoculates them against all criticism or that the mistakes that the Bush administration made in Iraq suggest that “morons” staffed it.

If the president and his senior adviser are such geniuses by comparison, why have they presided over a steady deterioration of the American position of the world? Why, on their watch, has China stepped up its aggression in the South China Sea? Why has Russia invaded Ukraine and annexed Crimea? Why has Libya descended into chaos along with Iraq and Yemen? Why has Syria been torn apart by a civil war that has killed nearly half a million people and sent millions of refugees flooding neighboring states? Why has an Islamic State arisen in the heart of the Middle East along with numerous other terrorist groups? Why is Iran, the No. 1 state sponsor of terrorism, more powerful than it has ever been since the ancient heyday of the Persian Empire?

Sure, Rhodes and Obama can pat themselves on the back that they didn’t involve American troops in another major ground war–but the cost of non-intervention has been steep. This is, after all, an administration that is committed, at least in theory, to stopping genocide, yet war crimes including genocide are occurring in Iraq and Syria and the U.S. has stood by and let it happen. You would think that seven years of actual government experience would season Rhodes and make him, and his boss, a little less arrogant, a little more humble. Nope. If this article is any indication, Obama and his alter ego remain just as full of themselves as ever.

That’s a major problem because it means that Obama and Rhodes have not been able to shift gears when things have gone wrong. Samuels quotes a “former senior official” in the administration as saying regarding Obama’s policy in Syria: “Instead of adjusting his policies to the reality, and adjusting his perception of reality to the changing realities on the ground, the conclusions he draws are exactly the same, no matter what the costs have been to our strategic interests. In an odd way, he reminds me of Bush.”

Ouch. In Obama-land there is, of course, no worse insult than to compare someone to the hated George W. Bush. But in this case it’s an unfair insult.

It’s true that Bush stubbornly refused to change course in Iraq between 2003 and 2006 even as the war effort teetered on the brink of defeat. But in 2007 he did change course and launched the surge that made victory possible. Get this: George W. Bush, the supposed hayseed, showed more intellectual honesty and suppleness than the Nobel Prize winner, Barack Obama, and his amanuensis, Ben Rhodes.

Alas, because Obama has been such a prisoner of his anti-Iraq War, narrative he failed to notice that the Iraq he inherited in 2009, was a radically different place from the hellhole that propelled him to the top of the Democratic presidential field. It was actually headed in the right direction–until Obama pulled the troops out. Thus he ensured that we left Iraq as badly as we entered it.

Instead of denigrating their predecessors and the Washington “foreign policy establishment,” Obama and Rhodes would be better advised to look within and to ask what went wrong: Why were their high hopes, the hopes encapsulated in the award of the Nobel Peace Prize, so cruelly dashed? Some of it is due to events beyond their control–but a lot was due to the mistakes they made and continue to make. The fact that the president and his top aides seem to have no awareness of those mistakes is mystifying and dismaying. 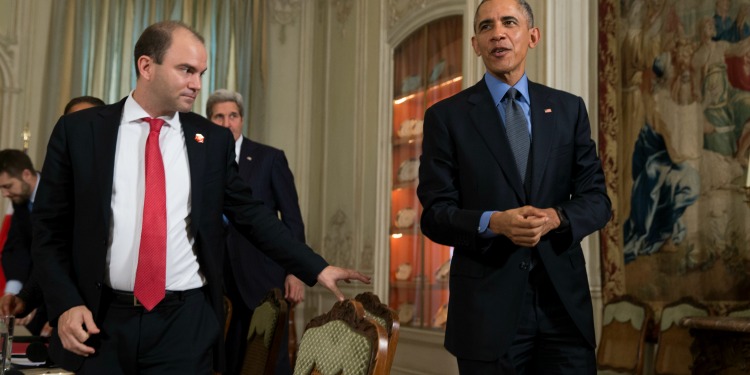