Even before Prime Minister Haidar al-Abadi announced the official offensive late on Sunday, the signs of what was to come were obvious. As Rod Nordland of the New York Times reported earlier in the day from Erbil in the Kurdish region: “With Iraqi forces surrounding Mosul for an imminent assault, residents are hoarding food and furtively scrawling resistance slogans on walls, the city’s Islamic State rulers are building tunnels and staying out of sight of drones, and Iraqi helicopters are dumping leaflets predicting that the end of the terrorist reign is near.”

Mosul is still held by an estimated 3,000 to 4,500 ISIS fighters, but their strength is ebbing away. Their money is running low, and they are having trouble recruiting new fighters. The population has turned against them and their insanely restrictive version of sharia law. There are even resistance cells said to be operating in the city.

Meanwhile, on the perimeter, thousands of Iraqi troops—Shiite militiamen and Kurdish Peshmerga—have gathered for an assault backed by 5,000 U.S. troops, who aren’t just providing advice but are also firing artillery and calling in air strikes. As usual, the Iraqi Counterterrorism Forces—their Special Operations Forces—will be in the forefront of the battle.

Contrary to what Donald Trump imagines, it is simply impossible to keep secret the preparations for a battle of this magnitude. There are valid reasons for telegraphing that an offensive is starting: It can dispirit the enemy, leading some to flee. It can encourage resistance fighters to rise up, and it warns civilians to seek shelter, so they don’t become casualties. But the actual tactical plans have remained a secret, and rightly so: ISIS didn’t know exactly where or when the blow would land.

Mosul is a much bigger target than previous cities occupied by ISIS such as Fallujah and Ramadi, but there is little doubt that sooner or later the attackers will succeed in vanquishing the black-clad fanatics who have held Mosul in their thrall since June 2014. This will be hailed as a great victory by Prime Minister Haidar al-Abadi and President Obama, both of whom have a considerable political incentive to proclaim “Mission Accomplished” once ISIS loses its last Iraqi redoubt.

It is worth recalling the original “Mission Accomplished” speech, which President George W. Bush delivered aboard the aircraft carrier Abraham Lincoln on May 1, 2003, after the overthrow of Saddam Hussein, to recall how premature such declarations can be. In truth, the hardest part of the struggle will occur not during the battle of Mosul but afterward. If the Iraqi government cannot forge a lasting peace that meets the basic needs of the Sunni minority, then we can expect another terrorist group—ISIS 3.0—to arise in the future.

This is not a theoretical danger given that ISIS itself is really “al-Qaeda in Iraq 2.0.” Recall that by 2010, AQI had been all but defeated. But then the Obama administration pulled U.S. troops out in 2011, and Prime Minister Nouri al-Maliki, freed of U.S. oversight, pursued a Shiite sectarian agenda. Lo and behold, the Sunnis did not appreciate being victimized by an Iranian-backed regime and welcomed ISIS when it appeared to be the champion of the Sunni community.

Although Maliki is no longer prime minister, there is still a risk of history repeating itself because of the power that Maliki and other Shiite politicians continue to enjoy in Iraq with the assistance of Iran. Sulome Anderson of Foreign Policy had an eye-opening account of a visit he paid in September to a village in northern Iraq that had been previously liberated from ISIS. Bashir had been freed by the Kurdish Peshmerga, but then they had turned over the town and its Turkmen population to the Shiite militias known as the Popular Mobilization Forces.

The PMF presence in the town is unmistakable. The yellow, green, and black insignia of the Badr Organization, one of the most prominent groups in the PMF, flutters from many a building. It’s similar to the flag of Hezbollah, the powerful Lebanese militia, and the men in the Badr Organization discuss their sister Shiite group with a mixture of envy and pride. As with Hezbollah, Iran’s influence on the PMF is also highlighted in Bashir — dusty posters of Ruhollah Khomeini and Ali Khamenei, Iran’s past and present supreme leaders, are scattered throughout the village.

If this kind of thing occurs in Mosul and other parts of the “Sunni Triangle,” Sunni discontent will simmer and burst out violently before long. The only way to prevent such a dire outcome is through the political process: Abadi and other Shiite politicians must cut deals with Sunni leaders to ensure that their people have their share of oil revenues and that they are not subject to arrest, harassment, and ethnic cleansing.

Iranian influence is likely to be a major stumbling block here: Tehran wants a compliant regime in Baghdad above all as part of its growing Persian Empire spreading all the way to the Levant. The U.S. could play a useful role, as it did before 2011, in countering Iranian influence and being an honest broker between the various sectarian groups. But that will require the next president to stay engaged in Iraq, militarily and diplomatically, in a way that President Obama failed to do between 2011 and 2014. 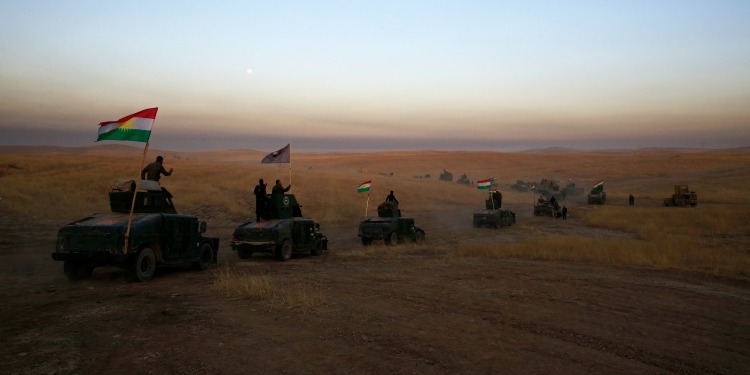