John Podhoretz coined the perfect term for the Obama foreign policy: The Underreaction Doctrine. President Obama has spent eight years underreacting to various threats—and then lecturing critics, in sanctimonious terms, about why his approach is the right one and why they are foolish for suggesting an alternative. If he has ever admitted making a major mistake, it has eluded me. It was hardly a surprise, then, that this pattern continued in the president’s final end-of-the-year press conference on Friday.

Obama was forthright in denouncing “the savage assaults by the Syrian regime and its Russian and Iranian allies on the city of Aleppo,” which he rightly said constitute “a deliberate strategy of surrounding, besieging and starving innocent civilians.” (Were that the president-elect would say as much!) But when asked if he felt responsible for allowing this horror to continue, Obama immediately reverted to his favorite straw-man argument—namely that it would have been impossible to ameliorate the suffering in Syria without an Iraq-style invasion. He claimed that little could have been done “short of putting large numbers of U.S. troops on the ground uninvited, without any international law mandate, without sufficient support from Congress, at a time when we still had troops in Afghanistan and we still had troops in Iraq and we had just gone through over a decade of war and spent trillions of dollars.”

The part about the lack of an “international law mandate” is particularly amusing in a grim way—certainly not an issue that the Russians and Iranians have been troubled about as they have successfully and ruthlessly intervened to prop up the Bashar Assad regime. There is much the U.S. could have done to hasten an end to the Syrian civil war that would not have involved sending large numbers of ground troops. Obama, in fact, is using just such a “small footprint” approach to battle ISIS in Iraq and Syria, dispatching a few thousand U.S. advisers to train and assist indigenous forces and employing U.S. airpower but not risking major ground forces. Such an approach was suggested for Syria as far back as 2011-2012, long before the Russian intervention made U.S. action far more risky. But Obama refused to authorize such a limited intervention and instead has stood by as Assad and his enablers commit the worst war crimes in the world.

Obama was just as smug and sanguine in discussing his underreaction to the Russian hack of the Democratic National Committee and various prominent Democrats—which constitutes nothing less than an attack on our democracy. He congratulated himself for handling the issue in a low-key way so that it would not contribute to “this hyper-partisan atmosphere,” and for safeguarding the integrity of the actual balloting even though there is no firm evidence (at least none that has been released) to suggest that the Russians had the capability or desire to actually tamper with voting machines. Obama claimed credit for averting a far worse cyber-assault through tough-talking with Vladimir Putin in September: “I felt that the most effective way to ensure that that did not happen was to talk to him directly and tell him to cut it out, there were going to be some serious consequences if he did not. And in fact, we did not see further tampering of the election process.”

In fact, it appears probable that the reason there was not more hacking after September was that the DNC had belatedly upgraded its cyber defenses. Yet leaks from all of the emails purloined earlier by Russian intelligence continued right up to the election itself as part of what the intelligence community has concluded was an attempt to influence the election in Donald Trump’s favor. Granted, it’s doubtful that the Russian intervention was decisive in determining the election outcome—but then the break-in to the DNC headquarters at the Watergate was not decisive in determining the outcome of the 1972 election, either, and yet it was still a crime and an outrage.

The administration’s lackadaisical response to this threat was well-exposed by the New York Times, which noted that the FBI first learned of the hacking of the DNC in September 2015 but chose to respond with a phone call from one agent to one lowly computer tech without making any effort to alert senior DNC officials. As the Times notes: “The low-key approach of the F.B.I. meant that Russian hackers could roam freely through the committee’s network for nearly seven months before top D.N.C. officials were alerted to the attack and hired cyber experts to protect their systems. In the meantime, the hackers moved on to targets outside the D.N.C., including Mrs. Clinton’s campaign chairman, John D. Podesta, whose private email account was hacked months later.”

This is the very definition of an underreaction—and it continues to this day because there is no evidence that Obama has yet retaliated for the Russian attempt to interfere in an American election. Failure to do so will only encourage further Russian meddling in other elections especially in Europe. But don’t try to tell Obama that. He will simply lecture you about how we can’t start World War III over a few emails. 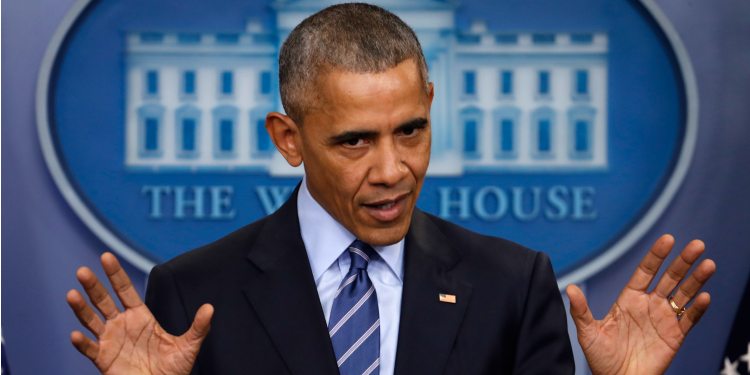