Reading Jeff Goldberg’s fascinating account in The Atlantic of his conversations with the president of the United States, the conclusion I came to was that Obama was born in the wrong country. (And, yes, contrary to the sinister suspicions of “birthers” like Donald Trump, he really was born in this country.) He would have made a great Scandinavian prime minister.

As Goldberg relates: “Obama has always had a fondness for pragmatic, emotionally contained technocrats, telling aides, ‘If only everyone could be like the Scandinavians, this would all be easy.’” And like a good Scandinavian, he views global warming as the world’s biggest security threat: “ISIS is not an existential threat to the United States,” he told Goldberg. “Climate change is a potential existential threat to the entire world if we don’t do something about it.”

I see Obama as another Jesper Berg, the fictional prime minister of Norway in the great TV series “Occupied” (viewable on Netflix), another handsome, intelligent politician who is also transfixed by the threat of global warming and is nonchalant when the Russians start to invade his country in order to seize its oil production. (Berg had tried to shut down the entire oil industry because he thought it contributed to global warming.)

Like Berg, Obama doesn’t seem unduly disturbed by evidence of Russia’s nefarious designs. He says of Vladimir Putin: “He understands that Russia’s overall position in the world is significantly diminished. And the fact that he invades Crimea or is trying to prop up Assad doesn’t suddenly make him a player. You don’t see him in any of these meetings out here helping to shape the agenda. For that matter, there’s not a G20 meeting where the Russians set the agenda around any of the issues that are important.”

This is almost a caricature of the Scandinavian mindset which holds that the only thing that matters is multilateral meetings at forums like the United Nations or the G20. Putin doesn’t seem to have gotten that memo. He may not be “helping to shape the agenda” at international talkfests, but he is shaping the agenda on the ground with his ferocious aggression which has left the United States and our allies reeling.

When it comes to stopping Russia, Obama adopts a defeatist mindset.  “The fact is that Ukraine, which is a non-NATO country, is going to be vulnerable to military domination by Russia no matter what we do,” he told Goldberg, and then proceeded to offer one of his trademark straw man arguments: “Now, if there is somebody in this town that would claim that we would consider going to war with Russia over Crimea and eastern Ukraine, they should speak up and be very clear about it.”

It’s a good thing that Ronald Reagan didn’t have this mindset. Otherwise he would never have provided arms to the mujahideen. Instead, he would have taken the attitude that because Afghanistan is next to the Soviet Union, Moscow is destined to dominate there unless the United States was willing to go to war with the USSR. Of course, Reagan didn’t take that attitude and his active support for the Afghan resistance helped to bring down the Soviet empire.

When Obama does act, he prefers to “lead from behind,” as one of his aides described the Libya intervention. Now that Libya has turned into a “shit storm” — the words that Obama uses privately, according to Goldberg — Obama is eager to deflect blame from the United States. “When I go back, and I ask myself what went wrong,” Obama said, “there’s room for criticism, because I had more faith in the Europeans, given Libya’s proximity, being invested in the follow-up.”

What a shocker — when the United States refused to act decisively to support a post-Qaddafi government, the Europeans didn’t step up. This should have been expected by anyone who is remotely familiar with the post-1945 history of the Western alliance, but Obama was apparently so invested in his multilateral fantasies that he was blind-sided by European indolence.

This is part of a pattern with Obama, who is nothing if not peeved with America’s putative allies. “Free riders aggravate me,” he told Goldberg, and in that category, he (like Donald Trump) seems to put pretty much every ally America has. While Obama ran for office accusing George W. Bush of being too unilateral and promising to make America liked and respected, as he prepares to leave office, Obama speaks with contempt about America’s two most important allies in the Middle East — Israel and Saudi Arabia.

He is right that the Saudis are heinous human rights violators and that their funding of Salafism has spread extreme version of Islam around the world. But he doesn’t seem to understand that the Iranians are even worse. At least, Saudi Arabia is committed to stability and to an American-led order in the Middle East. Iran is just as much a human rights violator and has also spread radical jihadism (in its Shiite, rather than Sunni, form), but it is also pledged to “Death to America” — and to Israel.

Yet Obama says that the “that the Saudis need to ‘share’ the Middle East with their Iranian foes. “ That is something that the Saudis will never do as long as a radical leadership rules in Tehran. (It was a different story in the days of the Shah, when Iran and Saudi Arabia were the “twin pillars” of America’s Middle East policy.) If the U.S. won’t act to protect the kingdom, Saudi Arabia will act on its own, as it is currently doing in Yemen, Syria, and other countries — and the U.S. is unlikely to be happy with the consequences.

Predictably, Obama is even more scathing when it comes to Israel, which, unlike Saudi Arabia, is a democratic country that respects human rights. It will surprise no one who has followed closely this administration’s foreign policy that Obama blames Prime Minister Netanyahu for the failure to achieve a peace treaty, giving a pass to the leaders of Hamas and the Palestinian Authority who refuse to recognize Israel’s right to exist as a Jewish state or even to condemn terrorism against Israel. According to Goldberg: “Obama has long believed that Netanyahu could bring about a two-state solution that would protect Israel’s status as a Jewish-majority democracy, but is too fearful and politically paralyzed to do so.” If Obama has stern words for Mahmoud Abbas and the leaders of Hamas — who are the actual obstacles to peace — Goldberg does not record them.

In some ways, the most amazing part of Goldberg’s article is his account of how Obama, who had essentially no exposure to the Middle East before becoming president in 2009, had the temerity to lecture Netanyahu, who has lived in the region his entire life. After Netayanhu tried to explain Israeli thinking to Obama, the president curtly cut him off: “Bibi, you have to understand something,” he said. “I’m the African American son of a single mother, and I live here, in this house. I live in the White House. I managed to get elected president of the United States. You think I don’t understand what you’re talking about, but I do.”

It is harder to find a better encapsulation of Obama’s overweening arrogance: He thinks that his life story, which has nothing to do with the Middle East, gives him a greater understanding of the subject than the prime minister of Israel possesses.

Not only is Obama arrogant, but he also appears utterly devoid of self-reflection or self-awareness. It is now generally agreed that one of the biggest disasters of his administration was his haste in setting a “red line” over Bashar Assad’s use of chemical weapons and then failing to deliver any meaningful consequences when Assad violated that “red line.” As Goldberg notes, “Even commentators who have been broadly sympathetic to Obama’s policies saw this episode as calamitous. Gideon Rose, the editor of Foreign Affairs, wrote recently that Obama’s handling of this crisis — “‘first casually announcing a major commitment, then dithering about living up to it, then frantically tossing the ball to Congress for a decision — was a case study in embarrassingly amateurish improvisation.’”

Obama, by contrast, bizarrely claims: “I’m very proud of this moment.” No doubt Jesper Berg would have been proud, too. But for anyone who believes that America should maintain its strength, credibility, and deterrence, this was one of the most cringe-making episodes in a presidency full of them. 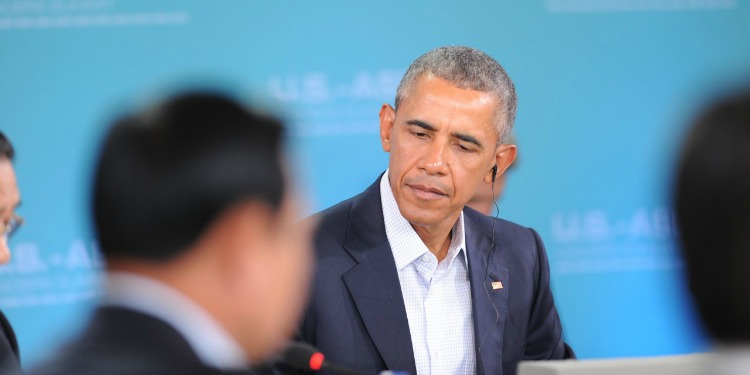