This year marks the 100th anniversary of the Sykes-Picot agreement. This was the 1916 agreement between France and Britain to split the Middle East into their own spheres of influence after the downfall of the Ottoman Empire. “Sykes-Picot” has often been taken as a short-hand for the drawing of arbitrary and illogical borders that supposedly are responsible for the conflicts sweeping the region today.

My Council on Foreign Relations colleague Steven Cook and research associate Amr Leheta offer a welcome corrective to that myth in this article. They point out that the borders of Middle Eastern states are really no more artificial than those of most borders around the world and that the populations within those borders are no more heterogeneous than most countries’ populations. Moreover, although those borders were first drawn more than 100 years ago, they have become institutionalized over the past century and people have come to feel a sense of identity as “Jordanians,” or “Iraqis,” or “Saudi Arabians” and to care about the borders of their states.

They conclude: “The conflicts unfolding in the Middle East today, then, are not really about the legitimacy of borders or the validity of places called Syria, Iraq, or Libya. Instead, the origin of the struggles within these countries is over who has the right to rule them.”

With a few exceptions (notably the Kurds, who really do feel they deserve a nation-state of their own), that strikes me as being on the money. Thus, schemes to redraw the borders of the greater Middle East are not the solution to what ails the region. There are many such ideas floating around — e.g., creating a “Sunnistan” out of the Sunni parts of Iraq and Syria, breaking up Iraq into Kurd, Sunni, and Shiite states, splitting up Syria into various sectarian statelets, creating a Pashtunistan out of Afghanistan and Pakistan, etc. It’s hard to give a talk on the Middle East without being confronted by some questioner eager to know about redrawing political boundaries.

My attitude toward such ideas is agnostic: I don’t think we should necessarily be wedded to the current boundaries but, as Cook and Leheta suggest, nor should we imagine that redrawing those boundaries is a panacea. You could break up Iraq and Syria tomorrow, and the only consequence would be to leave the same extremists, whether Sunni or Shiite, in control of most of the territory of those states. How would redrawing the border eliminate ISIS or Hezbollah or the al-Nusra Front? It wouldn’t.

Our focus should be on ending the civil wars convulsing Iraq and Syria, in particular, and destroying the violent jihadist groups, both Sunni and Shiite, that have found safe haven there. Once that’s done, we can talk about the borders. If the people of Iraq and Syria prefer to break up their states, as Czechoslovakia broke up, that’s fine as long as the process if peaceful. Personally, I’m doubtful that they will choose to create entirely new states — a laborious and disputatious process. I suspect most people in Syria and Iraq (Kurds excepted) would be happier with the existing states as long as there was a greater degree of freedom and decentralization and, above all, law and order.

So let’s not imitate the colonial diplomats of yesteryear by sitting around our conference rooms and offices in Washington and New York doodling on the maps of the Middle East. Instead, we should be thinking about how to eliminate the noxious groups that reign within those borders. 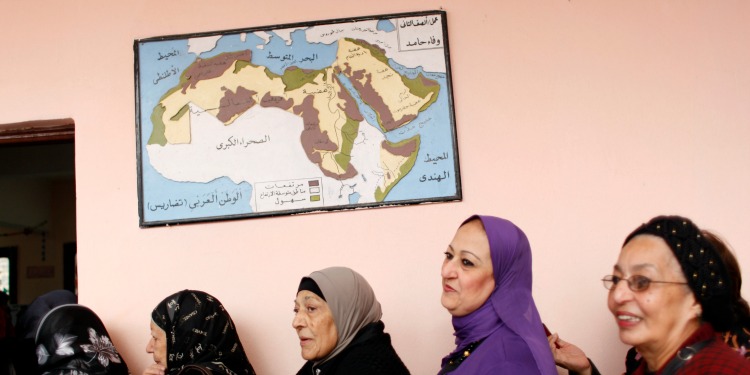