A week ago, President Trump rolled out the red carpet for Egyptian President Abdel Fattah el-Sisi, who was persona non grata in the Obama White House because of his human-rights violations. There is no evidence that Trump even brought up the human-rights issue. Instead he extended unwavering praise, saying, “We agree on so many things. I just want to let everybody know in case there was any doubt that we are very much behind President el-Sisi. He’s done a fantastic job in a very difficult situation. We are very much behind Egypt and the people of Egypt. The United States has, believe me, backing, and we have strong backing.”

It was widely noted that Trump enthusiastically shook Sisi’s hand after having previously refused to shake hands with German Chancellor Angela Merkel during a photo-op. Body language spoke volumes.

The reason for Trump’s embrace of the Egyptian president is obvious: He sees Sisi as a good guy because he overthrew a Muslim Broterhood regime and is actively repressing the Brothers. In the war against “radical Islamic terrorism,” there is no doubt which side Sisi is on. But while Sisi’s zeal in persecuting jihadists is undoubted, his skill and success are very much open to doubt. That was evident on Sunday when ISIS suicide bombers killed at least 44 people at two Coptic Christian churches in Egypt. This is only the latest such attack; a previous bombing at a Christian church in December killed at least 28.

The situation in the Sinai, where the Egyptian ISIS affiliate is based, is even worse. As Eric Trager of the Washington Institute for Near East Policy noted: “ISIS in Sinai has used advanced weapons to shoot down Egyptian military helicopters, destroy an M60 battle tank, and sink an Egyptian patrol boat off the coast of El-Arish. It also claimed responsibility for the October 2015 bombing of a Russian passenger jet in which 224 civilians were killed. U.S. government officials estimate that approximately 2,000 Egyptian soldiers have been killed in Sinai since the operation began – a shocking figure, considering that estimates typically put ISIS in Sinai’s membership at 1,000-1,500.”

Why isn’t Sisi being more successful? A lot of the problem, Trager argues, is that Egypt’s military is still locked in a conventional warfare mindset, similar to the U.S. military in Vietnam or in the early stages of the Iraq War. Thus, the Egyptian generals neglect the kind of more subtle, less heavy-handed counterinsurgency approaches that are usually the most effective. Sisi’s widespread repression doesn’t help. Not only is he locking up large numbers of Muslim Brothers, but he is also targeting liberal civil-society activists and anyone else suspected of disloyalty to his regime. That could wind up costing his regime the kind of popular support it needs to effectively gather intelligence against the terrorists.

Meanwhile Sisi is mismanaging the economy. As Robert Kagan and Michelle Dunne, co-chairs of the bipartisan Working Group on Egypt, observed, while Sisi has made some positive moves such as floating Egypt’s currency and reducing energy subsidies, “he has failed to take badly needed steps to train the burgeoning labor force and to encourage job creation in the private sector. According to official statistics, Egypt’s misery index in February was 45 percent: 33 percent core inflation plus 12 percent unemployment. Unemployment among Egyptians under 30 is much higher. Instead, Sissi has funneled billions into the vast business empire of the Egyptian military. Mega-construction projects such as the $8 billion Suez Canal expansion and the $45 billion new desert capital city keep the generals happy — and Sissi coup-proof.”

In short, Sisi is hardly a model ally, even if his rule is preferable to that of the Muslim Brotherhood. There is a real danger, in fact, that, just like Hosni Mubarak, he is presiding over a repressive, dysfunctional regime that will create more terrorism than it eliminates. As a major Sisi backer, the U.S. will find itself in the crosshairs of Egyptian radicals. Given that the current head of al-Qaeda, Ayman al-Zawahiri, is an Egyptian physician who was radicalized under the Mubarak regime, we know what that kind of blowback might look like.

There is a case for giving Sisi a bear-hug and then, once he has confidence in the United States, pressuring him to ease up on human-rights violation, to refine his blunderbuss conventional campaign against terrorism, and to take badly needed steps for economic growth. Perhaps that is Trump’s strategy. But Sisi, who receives $1.3 billion in U.S. military aid, is more likely getting the message that Washington has given him a blank check for repression. That will not serve U.S. interests well. 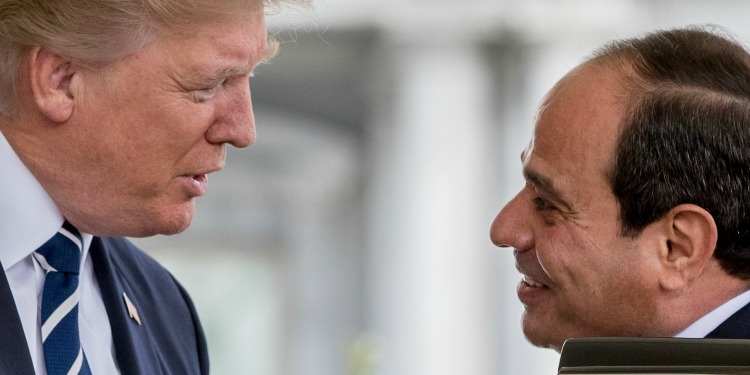