You can’t win them all. After Vladimir Putin’s successful intervention in the U.S. election last year—successful in the sense that he helped to elect Donald Trump even if Trump isn’t delivering exactly the policies he hoped to see—he has mounted a similar disinformation effort to influence the French election. It didn’t work. At least not in the first round of voting, with the only anti-Putin candidate, Emmanuel Macron, finishing ahead of three pro-Putin contenders: Francois Fillon, Jean-Luc Melenchon, and Marine Le Pen. But the Russians still have time to reach into their bag of tricks before the May 7 runoff between Macron and Le Pen.

During the first round of voting the Russian-run propaganda apparatus was in full-blown anti-Macron mode just as it was in full-blown anti-Clinton mode last year. In fact, the very same Russian intelligence group that broke into the Democratic National Committee computers last year, nicknamed “Fancy Bear,” also attempted to breach the Macron campaign computers. The Macron campaign claims its security was stout enough to keep out the Kremlin’s cyber-invaders, but there is little that Macron can do to stop all of the misinformation being pumped out by the Russian propaganda apparatus online and on the air.

Sputnik News, for example, claimed that Macron is backed by a “very wealthy gay lobby” and that he is loyal to American banks. The not-so-hidden innuendo here is that Macron (who is married to his former high school teacher) is gay. Whether this particular rumor is damaging any more at a time when homophobia is on the wane in the West is open to question, but, obviously, Macron’s opponents seemed to think so.

This is one story that is easy to connect to Moscow. Others are harder to trace. There were, for example, online rumors that Macron is the “favorite candidate of Saudi Arabia” (so the Saudis are backing the candidate of the “gay lobby”?), that he held offshore bank accounts, and that Melenchon, who finished in fourth place, was far ahead of the whole field. Many of the same Internet “trolls” that were promoting “fake news” designed to hurt Clinton last year were spreading these false stories during the French campaign. Expect many of them to move on to Germany where there is a general election on September 24.

The Russian intervention in the French election underlines how imperative it is to expose all of their machinations in America lest they keep manipulating Western politics. It also underlines the need for a more effective Western response.

The Macron campaign retaliated in a small but welcome way by refusing to grant press credentials to representatives of RT, Russia’s satellite-TV propaganda channel. It is imperative to stop treating RT as a legitimate journalistic outlet. It is a weapon in the Kremlin’s information warfare, designed to undermine Western democracies and to weaken their solidarity in the face of the Russian threat. RT representatives should register as foreign lobbyists and should be treated as the Kremlin agents they are.

Beyond that, as I have written before, the West needs to fight back more actively to get its message out to the oppressed populace of Russia. Reinvigorate the instruments of information warfare, such as the now-defunct U.S. Information Agency, that we used to wage the Cold War and give Putin a taste of his own medicine. Our information warriors, unlike theirs, wouldn’t even have to make anything up. Putin can’t handle the truth. 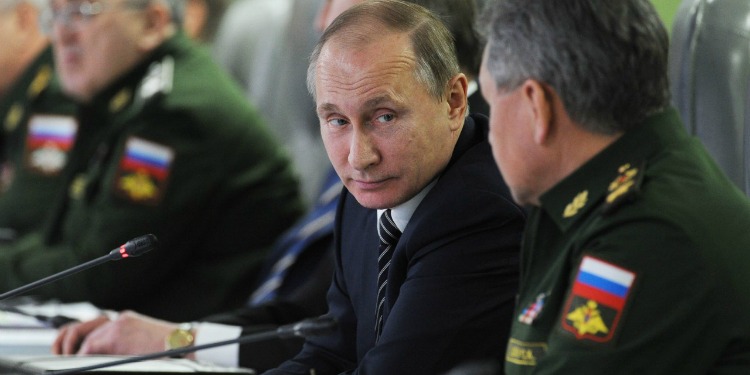