When H.R. McMaster took over as national security adviser in February, I heard from some friends who were Trump supporters and who knew that I was (and am) a great admirer of Lt. Gen. McMaster. They wanted to know if I was finally satisfied. Wasn’t the administration now on the right track? While I was happy that McMaster had replaced the volatile Mike Flynn, I would have been more sanguine if McMaster had been appointed president. But since he was simply an aide to President Donald J. Trump, I still had little faith in the course the administration would take.

That judgment has been amply vindicated by the events of recent months. The administration is, if anything, in greater disarray now than it was in February.

There are now reports that McMaster is on the outs with Trump. He may even be forced out of the White House, with the rumor mill suggesting he may be consoled with a four-star job back in the military. Whether that happens or not, there is every indication that Trump is ignoring McMaster’s advice to get tough on Russia and to reinforce U.S. troops in Afghanistan. But then, McMaster wasn’t even invited to Trump’s meeting with Vladimir Putin in Hamburg.

So now we are supposed to believe that another esteemed general—John Kelly—will save the White House as chief of staff. Again, I’m skeptical. Granted, chief of staff is potentially an even more powerful post than national security adviser. But there is scant reason to think that Kelly will have any more success in imposing discipline on a president who has been just as chaotic in government as he was in running his business and personal affairs during the course of his entire life.

Kelly did get off to a fast and welcome start by managing to oust the foul-mouthed Communications Director Anthony Scaramucci after just ten days on the job. But will Kelly be able to stop Trump from tweeting or stop Ivanka Trump and her husband, Jared Kushner, from having “walk-in” privileges to the Oval Office? Heck, will he even be able to stop other senior White House aides from bypassing the chief of staff’s office? If the answer to these questions is “no,” it is highly unlikely that Kelly will be able to cure what troubles the White House.

The problem is that, quite simply, no staffer can tell the president of the United States what to do. The president is always free to disregard staff advice—and Trump often does. Look at his tweets last week announcing a new policy on transgender military personnel that apparently caught not only the Pentagon by surprise but also his own daughter Ivanka, who has been a vocal advocate of LGBT causes.

And who on the White House staff told Trump to make a political speech to the Boy Scouts last week or to tell a police audience on Long Island to rough up suspects in the process of arrest? Trump could have saved himself apologies from the Boy Scouts and disavowals from various police chiefs if he had gotten good advice beforehand and listened to it. But that is not the Trump way. He actively resists regimentation, and always has.

The evidence suggests that if Kelly does try to rein in Trump, he will likely suffer a backlash. Trump loves “my generals”—but only as long as they fawn on him. He apparently liked Kelly, in particular, because, as secretary of the Department of Homeland Security, he did not challenge Trump and even defended his more questionable policies, such as a ban on travelers from half a dozen Muslim nations. By contrast, McMaster is reported to be losing the president’s favor because he is telling him tough truths that Trump doesn’t want to hear—e.g., that Russia is not a prospective ally. It stands to reason that Trump will love Kelly only as long as Kelly does not challenge him. But if Kelly does not challenge Trump, he isn’t doing his job. It’s not clear that there is any escape from this conundrum.

It’s not even clear that Kelly, for all of his impressive experience in the military and his outstanding personal qualities, is the best choice for the job. There has only been one general who has previously served as White House chief of staff—Alexander Haig during Nixon’s crisis years.

The most successful occupants of that position—individuals such as Jim Baker, Howard Baker, Leon Panetta, and Andrew Card—have all come out of the political world, with vast experience in Washington. Kelly is a great general, but he is not the kind of veteran Beltway operator that Trump needs. But it’s doubtful that a true Washington “wise man” would take on the thankless task of trying to bring order to the Trump White House. Kelly, as a career military man, no doubt feels a sense of responsibility to serve. That, alas, will not be enough for him to succeed in his daunting new assignment. 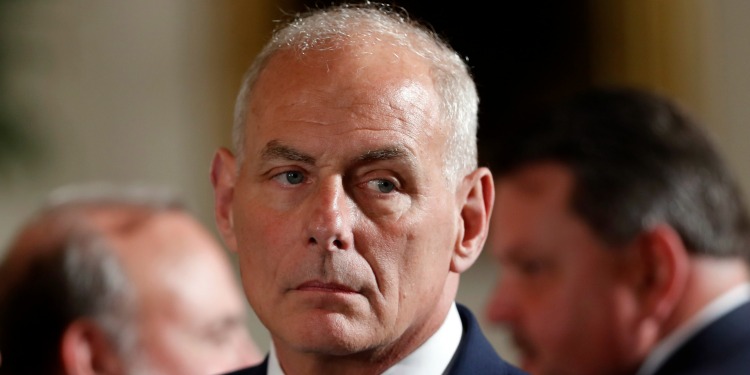