On Sunday, the whole world was shocked by the terrible events in Orlando—50 people dead, 53 wounded in the worst terrorist attack on U.S. soil since 2001. What does this atrocity portend and what can we do about it?

It is extremely difficult to stop one deranged killer from walking into a nightclub and opening fire. Indeed, we have been lucky since 9/11 that there have not been more such attacks. It makes sense to impose greater controls on guns, especially on the AR-15, which is used in so many mass-casualty shootings.  But even in Norway and France, where gun controls are far stricter, mass murderers were still able to acquire the weapons they wanted. The challenge of gaining control of such weapons is much greater in the U.S. than it was in Australia, a much smaller country with many fewer guns.

The best bet to catch terrorists before they strike is to uncover their connections with a terrorist group. That is why it is vitally important for the NSA to continue the kind of lawful and carefully controlled surveillance activities that Edward Snowden maliciously leaked: Our ability to conduct electronic intelligence-gathering is one of our most important lines of defense, combined with human intelligence gathering among our own Muslim community.

But what if a killer had no prior link with radical groups? Or what if those links were simply missed? Or developed just prior to the attack?

We don’t yet know the full story of Omar Mateen, the American gunman of Afghan ancestry who carried out this attack, but clearly the fact that he was able to strike represented an intelligence failure. The FBI apparently had investigated him several times in the past but had given him a pass, either because he was not violently radicalized at the time or because the agents missed the clues. Such failures are infuriating but sadly inevitable, given the old dictum that security forces have to be right all the time, whereas terrorists have to be right only once.

To counteract terrorists at home, we need to do more of what law enforcement and intelligence agencies have already been doing, but that has come under fire from civil libertarians. That includes monitoring electronic communications in various ways and also infiltrating Muslim communities, as the New York Police Department’s Intelligence Division was doing before it was ordered to cease and desist.

Of course, the best human intelligence-gathering depends on the cooperation of the communities where you are trying to gain information. Thus, maintaining good relations between the American Muslim community and various law enforcement agencies is of critical importance. Unfortunately Donald Trump’s crude anti-Muslim rhetoric and his calls to “ban” foreign Muslims (which would not have stopped the American-born Mateen) detract from this goal by sending Muslims a message that they are less than wholly American. Part of the reason why there has been less terrorism in the U.S. than in Europe is that we have done a better job of assimilating our Muslims. It would be a costly tragedy if that achievement were to be undone.

Trump’s other demand is for President Obama to refer to “Radical Islamic Terrorism” in his speeches—or else resign on the spot. It is a bit silly that Obama refuses to mention the religious affiliation of killers such as those in San Bernardino and Orlando. But keep in mind that President George W. Bush was also reluctant to do this because he didn’t want the American “war on terrorism,” as he called it, to be confused in the Muslim world with a “war on Islam,” which is how radical groups such as ISIS and al-Qaeda want to portray Western counter-terrorism efforts. Abroad, just as at home, the U.S. needs to win the cooperation of the vast majority of moderate Muslims if we are to identify, target, and eliminate the terrorists, and alienating ordinary Muslims with ham-handed rhetorical assaults on Islam, as Trump does, is as foolish as it is counter-productive.

That said, Obama’s reluctance to discuss more openly the problem of jihadist violence is indicative of a major shortcoming of his presidency: the lack of urgency he feels in waging wars. He does not want to be a wartime president, and, thus, he has never put enough resources, willpower, or momentum behind efforts to defeat groups such as the Taliban or ISIS. In the case of ISIS, U.S. aircraft continue to drop bombs at a desultory pace in Iraq and Syria, while U.S.-backed proxy forces continue to make slow but steady progress against ISIS on the ground. But the longer Islamic State manages to hang around—and it has been in existence for nearly two years now as a self-proclaimed caliphate—the more of an attraction it exerts for potential jihadists such as Mateen.

There is much talk and some action on counter-radicalization efforts, primarily online, where ISIS has shown its mastery of Internet propaganda. And this is certainly a worthwhile initiative for various agencies of the U.S. government to pursue. But, in the final analysis, it is impossible to stop jihadists from spreading their propaganda online; the Internet is simply too vast and varied to effectively police. The only way to effectively curb ISIS’s appeal is to destroy the Islamic State. Even suicidal terrorists don’t want to die in a losing cause, and it is notable that ISIS’s recruiting has declined along with its military fortunes.

The way to finally defeat ISIS is not simply by dropping more bombs or sending more troops, although we need to do both of those things. The other imperative, as I have written many times before, is to woo Sunnis in Syria and Iraq away from ISIS by offering them a political end-state they can support—one that does not involve domination by Iran or its proxies. This has been the most blatant missing element of America’s anti-ISIS strategy under Obama.

Of course, no one should be fooled into thinking that even if the Islamic State is destroyed, attacks such as the one in Orlando will simply cease to occur. An organization can be defeated by military force, but an ideology is harder to eradicate. ISIS could disappear tomorrow, and there would still be plenty of Islamist firebrands eager to recruit followers for terrorist attacks in the West.

A revolution in thinking in the Muslim world is the West’s most profound wish, but it is hard to bring about. The U.S. should do whatever possible, and more than it is currently doing, to support moderates in the Muslim world. At the same time, we must maintain our vigilance at home,  continue gathering intelligence, and continue attacking, either directly or through proxies, wherever terrorist groups gain sanctuary to recruit, train, operate, and propagandize. Unfortunately, there are an awful lot of places in today’s world that fit that description—ranging from the frontier regions of Pakistan to Afghanistan to Iran, Iraq, Syria, Libya, Yemen, Somalia, and on and on.

It is a big task to clean up all these cesspools, and it will not be done by invading country after country. This will be a long war, and it will be fought by a variety of means, some kinetic, many not. In many ways, this conflict resembles the Cold War, a multigenerational struggle waged with varied instruments. We can only hope that this conflict will end as satisfactorily from our vantage point as the Cold War did. 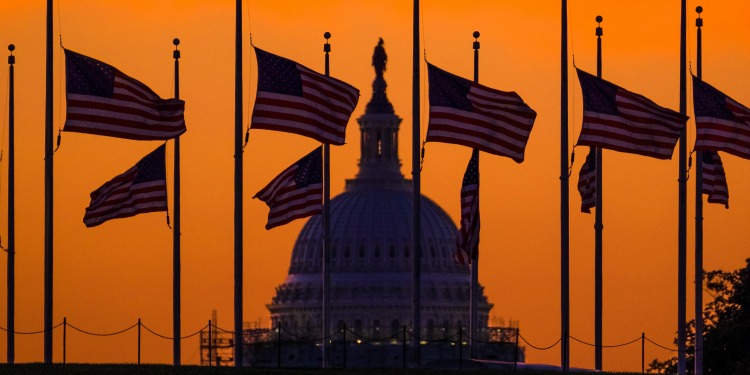