President Obama’s Sunday night speech from the Oval Office was meant to reassure the nation about the state of the war against ISIS. I doubt it achieved its objective, because the message, far removed from reality, was: Everything is heading in the right direction. We have a plan to defeat ISIS and we’re executing it to perfection. “We will destroy ISIL and any other organization that tries to harm us,” the president said.

The specifics of this strategy to destroy ISIS?

We’re working with friends and allies to stop ISIL’s operations — to disrupt plots, cut off their financing, and prevent them from recruiting more fighters…

With American leadership, the international community has begun to establish a process — and timeline — to pursue ceasefires and a political resolution to the Syrian war.”

This may sound impressive to anyone whose total knowledge is confined to what the president said Sunday night. But anyone who has been following the news knows that none of these lines of operation is having much success.

Yes, the U.S. is bombing ISIS but ISIS is replacing fighters as fast as we kill them, and it is managing to fund its operations in spite of air strikes on its oil infrastructure. Most of its money comes from taxing its subject population, a process that cannot be stopped by air power alone.

Yes, the U.S. is training Iraqi and Syrian fighters to oppose ISIS, but the most successful troops so far have been Kurds who are only interested in taking Kurdish areas. Wider-scale programs have failed to attract many recruits in Syria because the U.S. wants anyone we help to pledge not to fight Bashar Assad, who has killed far more people than ISIS. And in Iraq, U.S. training and support to the security forces has been subverted by the Iranian-backed militias.

Yes, the U.S. is working with allies to disrupt ISIS operations abroad but the success of those operations can be judged by the ease with which ISIS killers slew so many people in the Sinai Peninsula, Paris, San Bernardino, Yemen, Beirut, and elsewhere. A particular failure has been the unwillingness or inability of Turkey to cut off the flow of recruits for ISIS, which continue to arrive at the rate of roughly 1,000 a month.

Yes, Secretary of State John Kerry established at Vienna a timeline for a political resolution of the Syrian war. But the chances of that timeline actually being respected and implemented are about as great as the odds of Martians appearing over the skies of Syria to zap ISIS from their flying saucers. The fact is that there can be no resolution to the Syrian civil war as long as Assad remains in power, and Iran and Russia have given no indication that they are prepared to give up on him, while the U.S. is not making any efforts to get rid of Assad either.

For all these reasons and more, the U.S. intelligence community has concluded that ISIS is not “contained,” as Obama claimed it was just before the Paris attacks. Obama did not repeat his ludicrous claims of success on Sunday night, but he did strongly argue that his approach is working and he rejected any suggestion of sending any more ground troops, using as usual his straw-man argument that “We should not be drawn once more into a long and costly ground war in Iraq or Syria” and that we should not “occupy foreign lands.”

By sticking stubbornly to a failing strategy, Obama is, in fact, losing the war against ISIS and against Islamist terrorism more broadly. That is something the public intuitively understands — more than 60 percent of respondents in a poll disapprove of the president’s handling of ISIS and 53 percent support sending ground troops. Happy talk is not going to convince the public that the war is going well. Only results on the ground will alter perceptions at home, and those results have been — to put it mildly — inadequate. Note the latest news that the Iraqi offensive against Ramadi is stalled. No one is even talking anymore about an offensive against Mosul.  Those are the grim realities Obama elided on Sunday night. 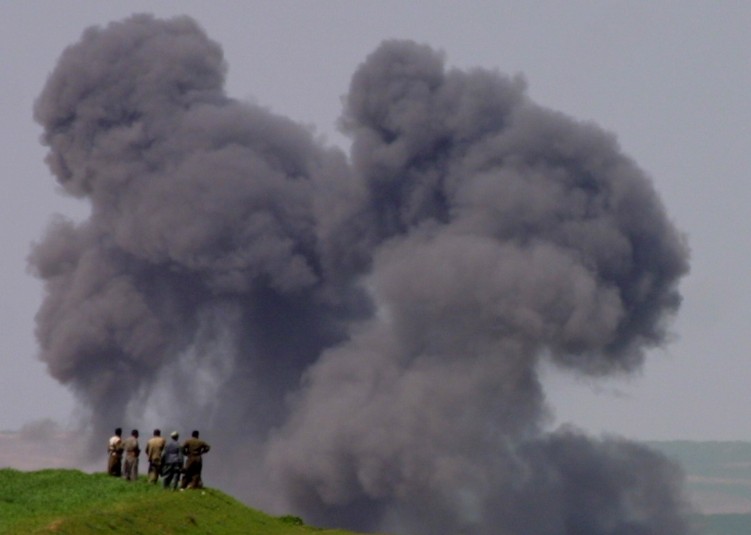