It is not often that wars end, so it is worth taking a moment to consider and commemorate what has just occurred in Colombia.

On October 2, the country’s voters narrowly and surprisingly rejected a peace accord negotiated with the FARC rebels by President Juan Manual Santos–part of a wave of populist surprises that include the approval of the Brexit referendum in the United Kingdom and the election of Donald Trump in the United States. Santos and the rebels then went back to the negotiating table and agreed on a series of 50 revisions in the accord.

It was still not enough to satisfy the accord’s opponents, led by former President Alvaro Uribe, who argued that it was a mistake to allow FARC fighters to forego prison sentences for their crimes and to be given representation in parliament. But rather than risk another defeat by calling another national referendum, Santos submitted the peace treaty to parliament which approved it unanimously (with Uribe and his supporters boycotting the session).

Santos is taking a risk for peace–a considerable one–by, in effect, riding roughshod over the objections of Uribe and other critics and by refusing to submit the accord for approval in a referendum. There is palpable nervousness among many Colombian conservatives, particularly in the security forces, that FARC, after failing to seize power at gunpoint, could now gain political power through the ballot box. There is plenty of precedent for such an occurrence in Latin America.

That is precisely what the FMLN, the Marxist group which gave up its armed struggle in 1992, has done in El Salvador. It’s what Sandinista leader Daniel Ortega has done in Nicaragua after stepping down from office in 1990 in a deal with the American-backed contras. It’s what the late Hugo Chavez did in next-door Venezuela after failing to seize power in a 1992 military coup. If that were to happen in Colombia, and if FARC were to try to impose a Chavez-style agenda of authoritarianism and socialism, it would be a disaster for which Santos would bear the blame.

But the odds of a peaceful FARC takeover are relatively low, at least for the foreseeable future, given how unpopular the group is with most Colombians–witness the small majority which rejected the initial peace accord on the grounds that it was too lenient to the rebels. There are other risks, to be sure, including the risk that some FARC guerrillas will simply become full-time narcotics traffickers. But we must not forget the considerable cost of simply allowing the civil war to continue.

Colombia has had one of the bloodiest histories in the Western hemisphere. Even before FARC launched its current war in 1964, Colombia had been ravaged by a decade of internecine warfare between the left and the right known as La Violencia, which claimed an estimated 200,000 to 300,000 lives. The war against FARC–one of the longest-running in the world–has claimed another 200,000 or more victim victims, displaced millions, and retarded Colombia’s social and economic progress.

In the past decade, thanks to the leadership of Uribe and Santos, and to an American aid package known as Plan Colombia, the Colombian armed forces have made dramatic progress. FARC ranks have shrunk from 20,000 fighters to perhaps 7,000. But nurtured by the drug trade and its cross-border support in Venezuela, FARC has managed to avoid total defeat. That makes demands from Uribe and other opponents of the pact to punish FARC ring hollow: If the army could not succeed in killing or capturing the remaining FARC rebels, why would they agree to voluntarily go to jail as part of a peace accord?

The uncomfortable reality of all peace accords, short of unconditional surrender (which is rare), is that they must involve some tradeoffs. Even the United States made a significant concession to Japan to end World War II, which made a mockery of demands for “unconditional surrender,” by allowing Emperor Hirohito to say on the throne in spite of his undoubted complicity in Japanese militarism.

Santos clearly judges the tradeoffs he made worthwhile and, in this judgment, he is backed up by most of the parliament and roughly half of the country. He may wind up being proven wrong, but he made a gutsy deal–one that makes him one of the few deserving recipients of the Nobel Peace Prize. 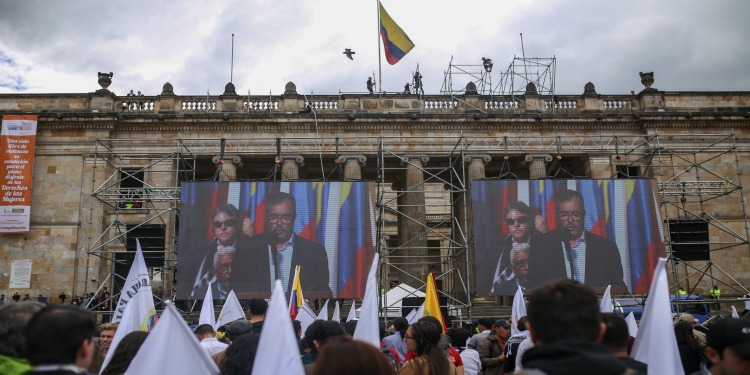