South Koreans have cause to be both proud and chagrined now that their recently impeached former president, Park Geun-hye, has been arrested on corruption charges.

This is a dizzying fall from power for the daughter of strongman Park Chung-hee, the ruler who between 1961 and 1979 transformed modern South Korea into an industrial giant. Park’s weakness and, ultimately, her undoing was her connection to Choi Soon-sil, a close friend who had helped her deal with her grief after her father’s assassination in 1979.

Choi is accused of using her close links to the president to shake down major corporations, including Samsung, for contributions to her foundations as well as to win favors, such as having her daughter admitted to a prestigious college. Both Choi and Lee Jae-yong (a.k.a. Jay Lee), the head of the Samsung monolith, are now facing their own trials. Even Choi’s adult daughter is being extradited from Denmark to face charges in South Korea. It remains unclear whether Park herself knew of these shakedowns or even benefitted from them herself.

President Park’s tenure in office was marked by tragedy, most prominently the sinking of a ferry in 2014 with more than 300 people, including many high school students, on board. Many Koreans blamed Park for this catastrophe, during which she was inexplicably out of contact for hours. In some ways, her government never quite recovered. But she was also a steely-eyed leader who stared down North Korea and closed the Kaesong Industrial Complex, which provided an economic lifeline to Pyongyang.

Park also took controversial but necessary decisions, such as striking a deal with Japan to resolve the “comfort women” issue involving reparations for Japan’s sexual enslavement of Korean women during the years of Japanese colonial rule. This clears away a major obstacle to better South Korean-Japanese cooperation, which is needed to contain and deter North Korea. Park also ordered the deployment of the U.S. THAAD anti-missile system, which is unpopular with many “progressives” but necessary for South Korea’s long-term security.

It is a shame that Park’s presidency has ended so ingloriously and that she could now be facing serious jail time. It is particularly problematic from the American perspective given that Park was more pro-American than her likely successor, Moon Jae-in, who has voiced skepticism about tough sanctions on North Korea and the deployment of THAAD.

While perhaps tragic, her downfall is also a sign of South Korea’s growing maturity as a democracy. It is impossible to imagine the hereditary ruler of North Korea, Kim Jong-un, leaving office save by death or coup.  By contrast, South Korea has become a rule-of-law country where it is possible to impeach a president and even to put her on trial for corruption charges.

After years of growing prosperity, South Korea is now moving to address the issue of corruption, which has long been pervasive. South Korea’s economy has long been dominated by a handful of chaebols (conglomerates) intimately associated with the government. This is a country where both business and government elites are likely to have gone to college together at one of only a handful of top-flight universities. Although South Korea now has the world’s 11th-largest economy, it ranks only 52nd in Transparency International’s survey of countries based on levels of corruption. It trails Rwanda, Cyprus, and Georgia, among other others.

The Park scandal and the related imprisonment of Samsung’s de facto head suggest the South Korean public and political system are finally getting serious about tackling the issue of illicit connections among the country’s elite. It is thus another growing pain, albeit a painful one, in Korea’s emergence not only as an economic but also a democratic powerhouse. 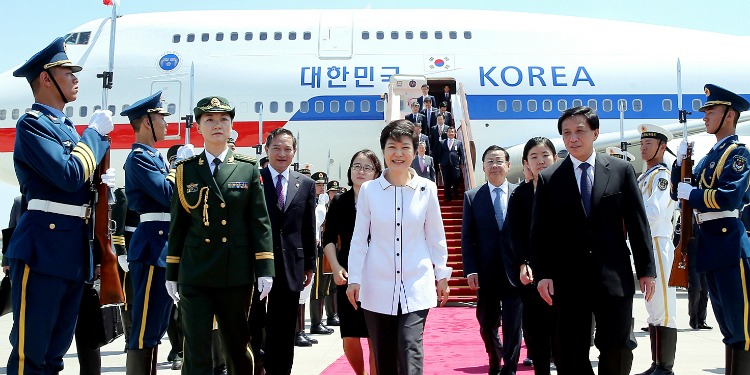