President Obama arrives in Riyadh on Wednesday at a time of turmoil in U.S.-Saudi relations. It has always been, of course, a slightly uneasy alliance between a liberal democracy and a fundamentalist state whose official religion is the puritanical Wahhabi strain of Islam. But ever since the 1970s, when Britain pulled back “East of Suez” and the U.S. stepped in to fill the power vacuum in the Persian Gulf, both Saudi Arabia and the U.S. have found much to unite them.

The essential bargain has long been: They give us oil, we give them security. That has remained true even as the U.S. has become less dependent on Saudi crude. (Only 24 percent of the oil consumed in the U.S. now comes from foreign countries, the lowest level since 1970, and of that total, just 11 percent — or a million barrels a day — comes from Saudi Arabia.) Yet even as the U.S. has lowered its dependence on Persian Gulf oil, that region remains as vital as ever to the health of our trading allies in Europe and Asia. That gives the U.S. a strong incentive to keep the oil flowing and to keep it out of the hands of American enemies (such as ISIS or Iran) that would use that oil wealth to fund attacks on the U.S. and its allies.

The U.S.-Saudi alliance reached a new height during the Persian Gulf War in 1990-1991, when the U.S. sent troops to the Kingdom to defend it from Saddam Hussein. It reached a new low a decade later when Osama bin Laden, a Saudi embittered in part by the presence of infidel troops in the Land of the Two Holy Mosques, orchestrated the worst ever terrorist attack on the United States by employing 15 other Saudi citizens as suicidal hijackers. There was much loose talk after 9/11 of “nuking Mecca” — a crude way of suggesting that the United States declare war on Saudi Arabia. Such suggestions died down in 2003, when Saudi Arabia finally cracked down on al-Qaeda after experiencing deadly terrorist attacks of its own.

But now, for a variety of reasons, the alliance is once again deeply troubled. Many Americans are still steaming about alleged Saudi complicity in 9/11; Congress is calling for the release of 28 pages of the 9/11 Report that were never previously made public and is considering passing legislation that would lower sovereign immunity defenses to make it easier for relatives of 9/11 victims to sue the Saudis. Riyadh has retaliated by threatening to sell hundreds of billions of dollars’ worth of American assets.

President Obama hasn’t helped matters by publicly criticizing the Saudis for being “free riders” and suggesting that they “share” their neighborhood with Iran.

This only exacerbates Saudi fears about what they see as an American abdication in the Middle East in favor of Iran. They see the nuclear deal with Iran as an indication that the U.S. has entered into a de facto alliance with a Shiite revolutionary regime that has made no secret of its desire to overthrow the Saudi royal family and to foment a Shiite revolution in its Eastern Province, where most of its oil is located. The fact that President Obama has done next to nothing to oppose the Assad regime in Syria or the Iranian-backed militias in Iraq only confirm Saudi worries.

“It is a concerning factor for us if America pulls back,” said Prince Turki al-Faisal, a former head of Saudi intelligence and a former ambassador to the United States. So concerning that the Saudis, under their new activist king, Salman, are taking matters into their own hands by, inter alia, launching a military intervention in Yemen against the Iranian-backed Houthi militia without, it seems, consulting the U.S. in advance. Predictably, the Saudi offensive has bogged down and may wind up helping al-Qaeda in the Arabian Peninsula. The Saudis have also suspended $4 billion in aid to Lebanon as a belated protest against Hezbollah’s de facto takeover of that state and have agitated for a more active program of arming the Syrian opposition.

Obama is likely to try to assuage Saudi concerns with soothing talk and more arms sales (the U.S. has already sold the Saudis more than $50 billion of weaponry in the past six years). Such gestures are likely to fail. The president would be better advised, in his last ten months in office, to rethink the policies that have done so much damage to U.S. relations not only with Saudi Arabia but also with other allies in the region such as Israel and the United Arab Emirates.

The president’s embrace of Iran is predictably backfiring. Far from renouncing their terrorist-supporting ways, the mullahs are doubling down on their support of murderous militias in Syria, Iraq and beyond — and thus driving more Sunnis into the arms of extremists such as the al-Nusra Front and ISIS.

Granted, the Saudi regime is abhorrent in many ways; its repression of women, in particular, is positively medieval, and its support for Wahhabi mosques around the world helps to breed extremism and even terrorism. But Saudi Arabia is essentially a status quo power which supports an American-led order in the Middle East and has quietly even made its peace with Israel. Iran, by contrast, is ruled by a revolutionary regime which is determined to expand its rule across the region, to destroy Israel, and to acquire nuclear weapons. If the choice is between Iran and Saudi Arabia, we have no alternative but to stick with our traditional alliance — at least until the day when Iran sees a change of regimes and once again becomes an American ally as it was prior to 1979.

Hard as it may be for a lot of people to accept, in the Middle East we don’t have the option of moral purity. We may not like the Saudis, but Iran is worse — and so, too, are the indigenous alternatives to the Saudi royal family. It’s easy to mock the royals for their hypocrisy — these are the people who posture as pious Muslims at home while living playboy lives in the West — but far worse would be to see in Riyadh rulers who are as fundamentalist as the Saudi royals pretend to do. The only real alternative on offer right now to the royal family are ISIS and al-Qaeda. That, too, is no choice at all.

We should press the Saudis to liberalize, so as to make possible an eventual transition to a constitutional monarchy. In the meantime, we can’t simply abandon them out of spite or out of unrealistic hopes that Iran will suddenly shed its “Death to America” mantra. 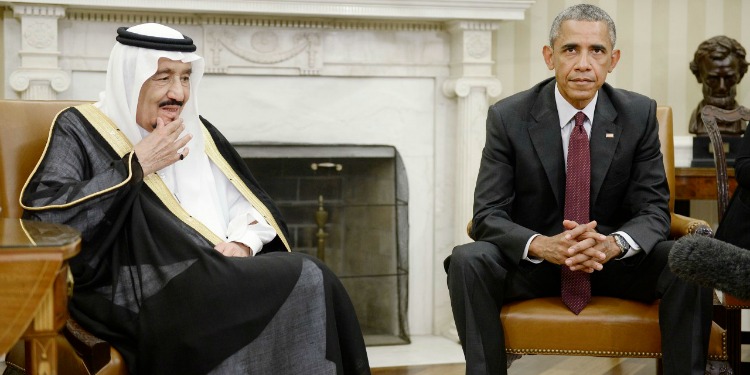