Even supporters of President Trump would have to admit that his first few months in office have been chaotic, what with the ill-advised executive order on immigration that the courts blocked, the failure of a White House-backed plan to repeal ObamaCare, and the departure of National Security Adviser Michael Flynn after just 24 days in office. The replacement of the mercurial Flynn, with his troubling ties to Russia and Turkey, by the distinguished soldier-scholar Lieutenant General H.R. McMaster was a major step in the right direction.

It is all the more welcome to see that McMaster is being allowed to make some significant personnel changes at the NSC. He hired as his deputy Dina Powell, a veteran of the Bush White House, and has offered K.T. McFarland, Flynn’s choice for the number two spot on the Council, an honorable way out via the ambassadorship to Singapore. He failed to remove the NSC’s senior director for intelligence, Ezra Cohen-Watnick, a young protégé of Flynn’s who has rubbed the CIA the wrong way and is now apparently leaking information designed to buttress Trump’s (unproven) charge that the Obama administration wiretapped him. Cohen-Watnick managed to stay on the job with the support of Steve Bannon and Jared Kushner. But now Bannon himself has been ousted from the National Security Council’s Principals Committee, a position that he should never have occupied in the first place.

It is a sign of just how byzantine the Trump White House is that, according to the New York Times, “a senior White House official presented the move as a logical evolution, not a setback for Mr. Bannon. He had originally been put on the principals committee to keep an eye on Mr. Flynn and to ‘de-operationalize’ the National Security Council after the Obama administration, this official said on condition of anonymity to discuss internal dynamics. This official said that process had been completed.” Why on earth would Trump appoint one senior official to watch over another? And how exactly is it that Bannon has “de-operationalized” the NSC, whatever that means?

The most obvious way to read the latest news is that McMaster has scored a small victory in his battle to make the policy process more rational. Just how significant this development is remains, however, open to question. There are other shadow policy chiefs lurking in the wings. Former Trump lawyer Jason Greenblatt is acting as Middle East envoy. Trump’s son-in-law Jared Kushner, another former real estate developer, has an even broader portfolio that includes China, Mexico, the Middle East, Canada and reinventing the federal government. There has seldom if ever been a presidential adviser with such a broad remit—or such thin qualifications for the post. Kushner isn’t even a formal member of the NSC Principals Committee but probably exercises more influence than anyone who is, other than the president himself.

Thus, while Bannon’s removal from the NSC is certainly a positive step forward, it does not ultimately end the problem of indiscipline in White House decision-making. That problem ultimately traces back to President Trump’s preferred style of management, which is unlikely to change significantly at age 70. But the latest move is at least a welcome win for McMaster, Secretary of Defense Jim Mattis, and other grownups who want to steer the administration in a responsible direction. 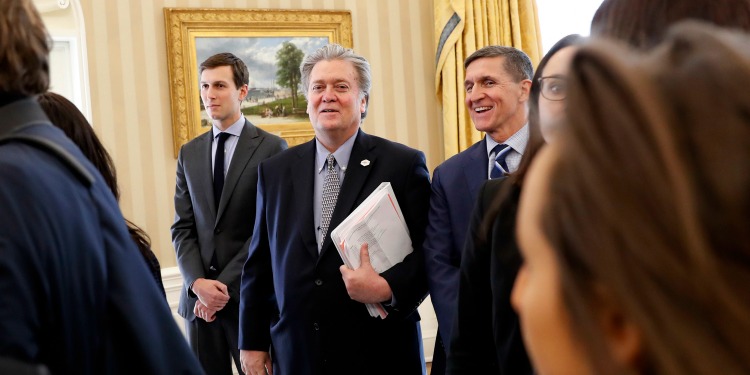