In the search for effective proxies in Syria, the U.S. has found the Kurdish YPG militia to be the best bet. It may be the group most willing to fight ISIS but also the one least infected by Islamist extremism. The Obama administration was prepared to overlook the YPG’s links to the PKK, the Kurdish terrorist group in Turkey, to the Bashar Assad regime and to Iran. It still hesitated, though, to provide the YPG with the heavy arms that would be necessary to take back Raqqa, ISIS’s capital, for fear of offending Turkey.

The Trump administration has now made the decision that Obama put off before leaving office. Trump has reportedly agreed to provide the YPG with what it needs to move on Raqqa. This decision is hardly disguised by the fact that the U.S. support is ostensibly going to the Syrian Democratic Forces, a Kurdish-Arab coalition. Everyone knows that the YPG are by far the strongest element within this coalition and that its Arabs are largely window dressing.

Supporting the YPG has long been the preference of the U.S. armed forces, whose advisers are working with this group, and so it is hardly surprising that Trump has taken the military’s advice. Indeed, this decision seemed inescapable as long as the U.S. wants to liberate Raqqa without sending its own ground forces to get the job done.

Turkey’s president, Recep Tayyip Erdoğan, will not be happy. He recently sent his air force to bomb the YPG despite U.S. protests. He views the YPG as a threat to Turkey, not only because of its close ties to the PKK but also because it is bent on creating a Kurdish state (Rojava) in northern Syria. He is not wrong about this; the creation of Rojava is indeed the YPG’s goal.

It is understandable that the administration did not accede to Erdogan’s protests given how he has ignored American equities, shredded Turkish democracy, and drawn closer to Russia. But offending Turkey carries obvious risks, given the extent to which the U.S. is dependent on access to the Incirlik air base in Turkey to support its operations in northern Syria and Iraq. Erdogan can make life difficult for the U.S. if he were to suspend the use of Incirlik. Still, the U.S. military could rely on air bases in the Persian Gulf region, so Erdogan’s opposition is not a deal-breaker.

The real issue here is less the impact of this decision on U.S.-Turkish relations, which are already poor, but, rather, its effect on Syria’s future. What exactly does the administration seek to accomplish in Syria beyond defeating ISIS? At the start of the U.S. invasion of Iraq, then-Major General David Petraeus asked a prophetic question: Tell me how this ends? The same question should now be applied to the U.S. campaign in Syria: How will it end?

With any luck, ISIS will lose its strongholds on both sides of the Iraq-Syria border by the end of the year. But who will then administer the territory? The U.S. hope is that locals of moderate predilection will take control of their own communities and that Syria will devolve into a series of autonomous cantons. But if there is one thing we should have learned from the past decade and a half in Iraq and Afghanistan it is that moderates can seldom stand on their own against well-organized extremists such as ISIS and al-Qaeda.

In Syria, the moderate opposition has been losing ground for years, thanks in large part to Western neglect. Growing stronger have been the government forces of Bashar Assad—backed by Iran and Russia—and the Sunni extremists of al-Qaeda’s Syrian chapter which, after several re-brandings, is now known as Hayat Tahrir al-Sham. HTS is becoming the strongest force in opposition-controlled areas and stands to benefit from ISIS’s demise. If the administration has a plan to prevent al-Qaeda from gaining at ISIS’s expenses, it remains a closely guarded secret. n fact, from all that I have been able to discern, no such plan exists. Nor does the administration seem to have any plan to diminish the power of Shiite extremist groups such as Hezbollah, which have become an increasingly powerful force in government-controlled areas.

As far as I can tell, the administration simply hopes that, by defeating ISIS, it will enable negotiations to create some kind of Syrian confederation with Kurds, Sunnis, and Alawites dividing up the country between them. This may be the ultimate endgame, but it will only work if none of these cantons are under the sway of violent extremists. The model here is the 1995 Dayton Peace Accords, which divided Bosnia into the largely Serbian Orthodox Republika Srpska and the largely Bosniak (Muslim) and Croat (Catholic) Federation of Bosnia and Herzegovina. The division wouldn’t have worked if Serbian war criminals had taken control of the former and Muslim extremists of the latter.

Likewise, Syria will never see peace or stability as long as Shiite and Sunni fanatics remain dominant on both sides. Indeed simply the continuing rule by war criminal Bashar Assad ensures that the majority of the population will continue to remain in revolt, consigning Syria to perpetual warfare.

What plan, if any, does the administration have prevent Sunni and Shiite extremists from dividing Syria between them? Has it given any thought to how to remove Assad and what would replace him? So far, there is no sign of any Syria policy beyond defeating ISIS, the cruise missile attack on one Syrian air base earlier in the month having been an apparent aberration.

This is hardly a failing of the Trump administration alone; the Obama administration also had no endgame in mind in Syria, and it was presented with a much less complex situation in the early years of the civil war which broke out in 2011. Or, rather, it would be more accurate to say Obama had no realistic end game in mind since his strategy was hinged on the fanciful talks convened in Geneva by Secretary of State John Kerry. The Trump administration has not restarted those futile negotiations, but nor has it presented a more realistic blueprint for ending the Syrian civil war. That is a much more significant issue, and a much harder one to resolve, than the arming of the YPG. 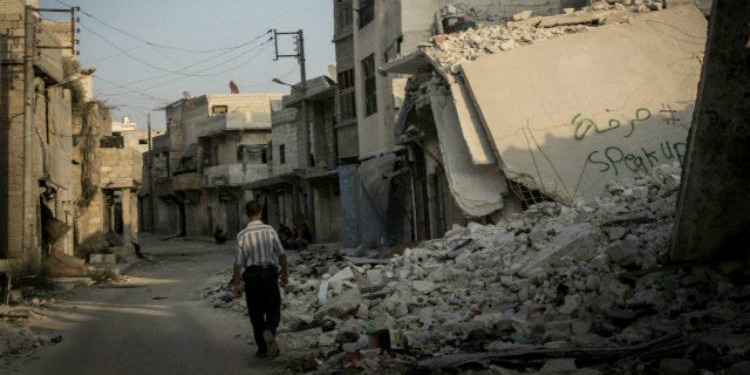