All but forgotten today, the Office of Strategic Services was America’s first civilian intelligence agency. Hastily organized after the start of World War II by “Wild Bill” Donovan, a World War I combat hero and corporate lawyer from New York, the OSS contributed to America’s victory over the Nazis, fascists, and Japanese militarists.

OSS agents organized into Jedburgh teams parachuted into occupied France ahead of the Allied landings in Normandy and Southern France. Another group of OSS officers, known as Detachment 101, raised an army of Kachin tribesmen in Burma to fight the Japanese and rescue downed Allied airmen. Yet more OSS officers infiltrated Yugoslavia to help Tito and his partisans evict the German army. OSS officer Allen Dulles, while based in Bern, Switzerland, negotiated the surrender of Germany forces in Italy and acquired vital intelligence on the Holocaust, the Nazi rocket program, assassination plots against Hitler, and much else. The OSS’s Research and Analysis branch pioneered the analytic work that has been carried on since 1947 by the CIA’s Directorate of Intelligence. More broadly, OSS laid the foundation not only for the CIA but also for the Navy SEALs and the Army Special Forces.

A force of 13,000 people at its peak (roughly equivalent to a single army division), the OSS included many outstanding individuals who helped to shape postwar America. They included, as the OSS Society reminds us, “the ‘French Chef’ Julia Child; the actor Sterling Hayden; Ralph Bunche, the first person of color to receive the Nobel Peace Prize; Supreme Court Justice Arthur Goldberg; Pulitzer Prize recipient Arthur Schlesinger Jr.; Colonel Peter Ortiz, a two-time Navy Cross recipient; Jack Kilby, a recipient of the Nobel Prize in Physics; Virginia Hall, the only American civilian women to receive the Distinguished Service Cross in World War II; James Donovan who was portrayed by Tom Hanks in ‘Bridge of Spies’ and served as the OSS general counsel; and four directors of the CIA (William Casey, William Colby, Allen Dulles and Richard Helms).”

To be sure the OSS had plenty of misfires. Organized on the fly, its professionalism was not always of the highest caliber and it did not have long to train its personnel. But “Wild Bill” Donovan, who was himself a recipient of the Medal of Honor, was right to say that OSS personnel performed “some of the bravest acts of the war.”

Few of these heroes remain, and they are in their 80s and 90s. Time is running out to give them honors that are long overdue. The OSS Society has been pushing for Congress to award the remaining veterans a Congressional Gold Medal—an honor that dates back to the earliest days of the Republic. It has previously been given to, among others, the Doolittle Raiders, Native American code talkers, flying aces, the Tuskegee Airmen, and the “Monuments Men,” as well as to various golfers (Jack Nicklaus, Byron Nelson), civil rights heroes (Rosa Parks, the Montgomery marchers), the astronauts who went to the Moon, “Snoopy” cartoonist Charles Schulz, and many others.

The Senate unanimously already approved the Gold Medal for the OSS but the legislation is hung up in the House, which has recently enacted rules requiring a special waiver to grant the medal to a group of people. If there is ever a case for granting that waiver, this is it. The House needs to pass the legislation during its lame duck session after the election or else the whole process will begin anew. The OSS veterans are so aged now that if Congress waits too long there may not be anyone left alive to receive this well-earned honor. 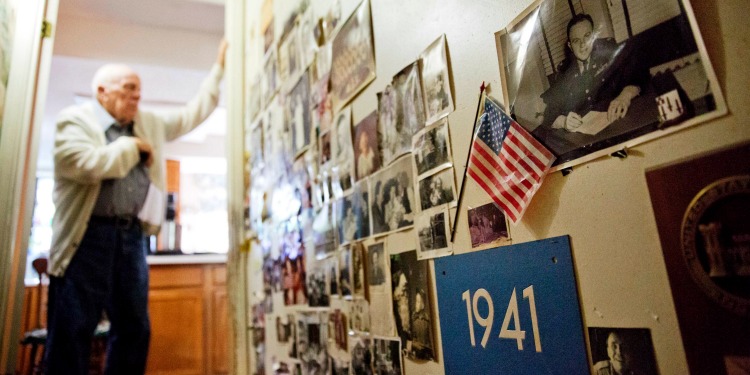