In unveiling President Trump’s fiscal year 2018 budget, Mick Mulvaney, head of the Office of Management and Budget said: “It is not a soft-power budget. This is a hard-power budget, and that was done intentionally. The president very clearly wants to send a message to our allies and our potential adversaries that this is a strong-power administration.”

Well, yes and no. The budget does boost spending for the Departments of Defense and Homeland Security—including $2.6 billion to build a border wall that Mexico was supposed to pay for—while cutting funding by 28 percent for the Department of State. The proposal would eliminate programs such as the Overseas Private Investment Corporation, the National Endowment for the Arts, the National Endowment for the Humanities, the Corporation for Public Broadcasting, the Woodrow Wilson International Center for Scholars, and the U.S. Institute for Peace. Assuming that this budget is enacted by Congress as written—and there is scant chance of that happening—it would indeed represent a blow to “soft power” spending. But defense hawks are hardly content with its increases in hard power.

The “top line” defense number is impressive: $603 billion. And that’s just the “base” budget; there is also $65 billion budgeted for the Overseas Contingency Operations fund used to support ongoing operations in places like Afghanistan and Iraq. But John McCain, chairman of the Senate Armed Services Committee, believes that at least $640 billion is needed for the base budget to make up for the declining size and readiness of the U.S. armed forces. While Trump’s defense budget is billed as a 10 percent increase from sequestration levels, it is actually only a 3 percent increase over President Obama’s proposal.  When this Trump defense budget was first unveiled, McCain complained, “With a world on fire, America cannot secure peace through strength with just 3 percent more than President Obama’s budget. We can and must do better.”

McCain’s complaints have been supported by well-respected conservative analysts such as Tom Donnelly and Gary Schmitt of the American Enterprise Institute who have written about “Trump’s Fake Defense Buildup,” complaining that Trump is coming nowhere close to funding the ambitious increases in force size he promised during the campaign.

In truth, it’s hard to know exactly what Trump is proposing to do because the budget blueprint that was released is so general; it contains only two pages of discussion of each government department. Thus the budget raises more questions than it answers.

When it comes to the Department of State and international aid programs, the Trump budget calls for a 28 percent slash. But it begins by saying what won’t be cut: It won’t cut funding for new embassy construction and increased security. It won’t cut $3.1 billion in aid to Israel.  It maintains funding for President Bush’s President’s Emergency Plan for AIDS Relief.

So what gets cut? It reduces U.S. contributions to the United Nations and the World Bank, especially to the UN’s climate-change initiatives. It reduces funding for State’s cultural exchange programs although it does maintain the Fulbright Scholars program. But mostly the budget engages in the kind of slight-of-hand that denizens of the Washington “swamp” have always favored. The budget claims, for example, that it “refocuses economic and development assistance to countries of greatest strategic importance to the U.S. and ensures the effectiveness of U.S. taxpayer investments by rightsizing funding across countries and sectors.” Whatever that means.

This simply looks as if the Trump White House is using foreign aid as a convenient cut to offset some of the increased Pentagon spending, even though there isn’t nearly enough money in foreign aid to make up for even the modest defense budget increases that Trump is calling for. All foreign assistance, after all, amounts to $42.4 billion, which sounds like a lot but is only 1 percent of the federal budget.

It’s easy to say in the abstract that you will cut foreign aid, but which countries specifically is Trump going to “right-size?” He already said there will be no cuts for Israel. Is he going to cut Afghanistan, thereby undermining its ability to fight the Taliban? Cut Egypt, thereby undermining its capacity to fight ISIS and other Islamic extremists, and to uphold a peace deal with Israel? Cut Iraq and Jordan and thereby undermine their ability to fight ISIS? Cut Pakistan and undermine the stability of a nuclear-armed state? Cut Kenya, Nigeria, Ethiopia and other African states that are on the frontlines fighting against groups such as Boko Haram and al-Shabaab?

In fact, while there is a lot of waste in foreign aid spending, the major recipients are clearly of major strategic importance to the United States, and U.S. assistance does play a significant role in allowing them to fight our mutual enemies, so we don’t have to put U.S. troops on the frontlines. As for the State Department, reviled as it often is, is also has a major role to play in expanding American power, which is why 120 retired generals and admirals released a letter calling for full funding for the State Department and foreign aid.

There is little sense that anyone in the Trump administration did much hard thinking about these difficult issues before producing this budget. Indeed it’s hard to know who could even tackle such an assignment given the dearth of any political appointees at the Departments of State and Defense below the cabinet level and the lack, before that, of any serious policy apparatus on the campaign.

Thus the budget appears to be nothing more than a representation, in numerical form, of the very vaguely stated preferences of a president who likes military power but has contempt for foreign-assistance programs. There has been too little thought given to what it will actually take to increase U.S. military power, what that power should be used for, and how the diplomatic and foreign aid initiatives of the U.S. government can support that grand strategy. The Trump budget gives the appearance of coming up with budget numbers out of more or less thin air, without doing the kind of hard, bottom-up analysis that is actually necessary to figure out how to use spending most effectively. 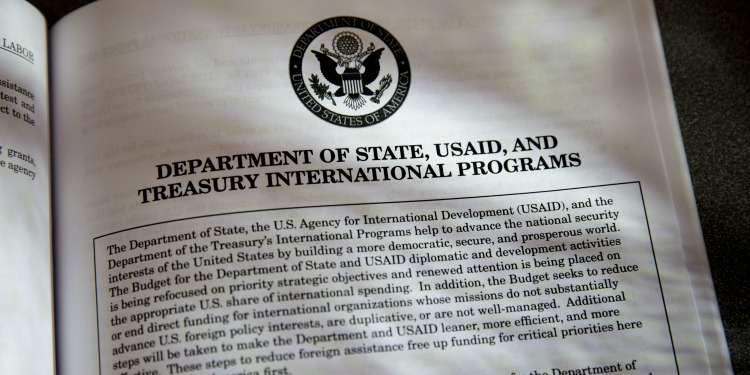