The Trump administration makes so much news that it’s easy to lose sight of even important stories. Thus, the leak of the transcript of a phone call between Trump and President Rodrigo Duterte of the Philippines has not received the attention it deserved. First reported by the website The Intercept on May 23, the transcript, which came from Manila, not Washington, makes for astonishing reading.

Duterte has become notorious for the wave of terror he has unleashed in the name of fighting drugs. As Trump’s own State Department wrote on its 2016 human-rights report: “Since July police and unknown vigilantes have killed more than 6,000 suspected drug dealers and users as the government pursued a policy aimed at eliminating illegal drug activity in the country by the end of the year.” Duterte has not been coy about his intentions. “Hitler massacred 3 million Jews,” he said after his election last year. “Now, there are 3 million drug addicts … I’d be happy to slaughter them.”

In his call, Trump had nothing censorious to say about all of these killings, which, as one might expect, have felled the innocent along with the guilty. Far from condemning Duterte for his vigilantism, Trump praised him. “I just wanted to congratulate you because I am hearing of the unbelievable job on the drug problem,” he said. “Many countries have the problem, we have a problem, but what a great job you are doing and I just wanted to call and tell you that.”

Duterte purred in response:  “Thank you, Mr. President. This is the scourge of the nation now, and I have to do something to preserve the Filipino nation.”

That previous president, of course, was Barack Obama, a man Duterte described as a “son of a whore” who could “go to hell” for having the temerity to criticize the extra-judicial killings. Trump did not condemn Duterte for these remarks, which are an insult not just to Obama but the entire United States.

Perhaps it’s just a coincidence, but since that glowing endorsement from Trump, Duterte has declared martial law on the island of Mindanao, which is home to 20 million people and is seeing a surge of Islamist militancy. Duterte now suggests he may extend martial law to the entire country.

He has “joked” that under martial law his soldiers can commit rape with impunity. This follows another “joke” last year when he spoke of a prison uprising in which an Australian woman was taken hostage, raped, and killed: “I was angry because she was raped, that’s one thing. But she was so beautiful, the mayor should have been first. What a waste.”

This is not, to put it mildly, the way that the leaders of liberal democracies—or for that matter any other countries–should talk. But that is the way that Duterte routinely speaks.

Worse than his words are his actions. He has already made a mockery of the rule of law by unleashing death squads. Now he may kill democracy in the Philippines altogether. Duterte greatly admires Ferdinand Marcos who, after being elected president in 1965 and reelected in 1969, declared martial law in 1972 and ruled as a dictator until he was overthrown in 1986.

Under these circumstances, the proper role of an American president—given the long historical, strategic, and cultures ties between the two countries—would be to warn Duterte in the sternest possible terms against violating human rights or usurping the Philippines’ fragile democracy. Instead, Trump appears to be egging him on. Thus, like it or not, Trump is implicitly associating himself with whatever atrocities, whether verbal or worse, his friend Rodrigo may commit next. 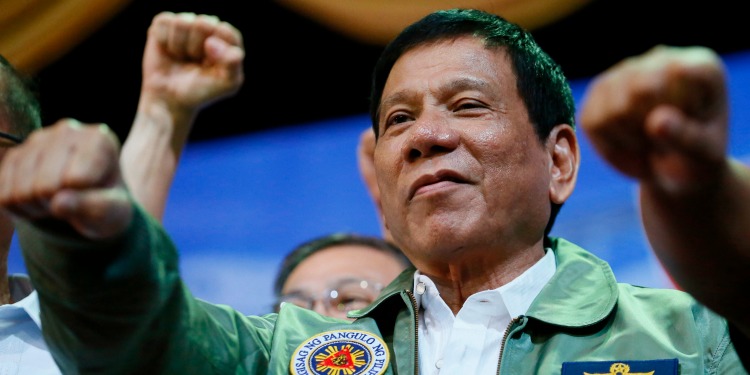