We all make mistakes. My most recent one was agreeing to go on Tucker Carlson’s Fox News show on July 12 to discuss—I thought—President Trump and U.S. policy toward Russia. Instead, I got the equivalent of a barrel of raw sewage dumped on my head.

Carlson was still smarting from a confrontation he had had the night before with Ralph Peters, a retired army officer who had accused him of sounding like “Charles Lindbergh in 1938” for his advocacy of an alliance with Russia. Because I had retweeted Peters’ comment, Carlson appeared determined to take out his fury on me. His very first question was: “To dismiss anyone who doesn’t share your view as a Nazi sympathizer seems cheap and a short-cut and not really befitting a self-described genius like yourself. Why would you say something like that?”

“Well, rest assured, Tucker, I’m not actually saying that you are a Nazi sympathizer,” I replied, while wondering when had I described myself as a genius? I went on to state my view that Russia is a major threat to the U.S., not a potential ally. I was “very disturbed,” I added, to hear Carlson “yukking it up” at the top of his show with guest Mark Steyn about Donald Trump Jr.’s eagerness to accept Russian help in the 2016 election.

During the course of the next 10 or so minutes, Carlson and I traded barbs about Russia, Syria, Iran—and my foreign policy perspicacity or lack thereof. I tried to stick to the issues, but he kept interrupting me with smirky sarcasm, obnoxious laughter, and ad hominem insults. It was hard to get in a word edgewise.

“You have been consistently wrong in the most flagrant and flamboyant way for over a decade,” he charged. This turned out to be principally a reference to the invasion of Iraq, which he had also supported before turning against it. “You’re humiliating yourself,” he said, and “this is why nobody takes you seriously.” (If no one takes me seriously, why was I invited on his show?) I was so discredited, Carlson said, that maybe I “should choose another profession. Selling insurance, house painting, something you’re good at.” Clearly, he has an inflated impression of my house-painting skills.

Ironically, while dishing out a nonstop stream of invective, Carlson kept accusing me of not engaging in substantive debate: “This is precisely the style of debate that prevents people from taking you seriously… It’s almost impossible to have a conversation with you because your responses are so childish… You are incapable of giving a factual answer.”

I thought the exchange was a draw, despite Carlson’s home-court advantage, but I left aghast at his rudeness and unprofessionalism. If this is how he treats guests on his TV show, I’m afraid that if I were ever invited to his house—admittedly unlikely—I would be served a hemlock cocktail.

I was, therefore, greatly surprised to read articles about our encounter which made this nasty, grubby, dispiriting spectacle sound not like something out of the World Wrestling Federation but, rather, the reincarnation of the Lincoln-Douglas debates. Both the liberal writer Peter Beinart in The Atlantic and Curt Mills in the Realpolitiker National Interest lauded Carlson for taking a brave stand against dread “neocons” like me who supposedly dominate Republican foreign-policy.

“In his vicious and ad hominem way,” Beinart wrote, admiringly, “Carlson is doing something extraordinary: He’s challenging the Republican Party’s hawkish orthodoxy in ways anti-war progressives have been begging cable hosts to do for years.”

“Though the word was actually never uttered,” Mills gushed, “Fox News primetime host Tucker Carlson cemented himself this week as the Right’s most prominent critic of neo-conservatism.” And then Mills provided space for the scourge of the neocons to spew more of his juvenile abuse, calling me “dumb,” “totally mediocre,” and not “smart.” Well, we can’t all be as brilliant as a Fox host.

I don’t doubt that Carlson has embraced a Rand Paul view of the world that sees American intervention as the biggest threat to peace and that advocates making deals with adversaries such as Russia and Iran rather than confronting them. But this is hardly revolutionary in today’s Trumpified Republican Party. While Trump still takes a more or less anti-Iran position (although he has endorsed the continuing rule of Iran’s proxy Bashar Assad), he has been all too friendly to Vladimir Putin—who, not so incidentally, helped to get him elected. There is nothing brave or interesting in today’s GOP about advocating the neo-isolationist position that Carlson now takes—it echoes the view of the president himself, to the extent that Trump has any consistent world view.

Maybe there’s a good case to be made for an “America First” foreign policy—a term used by Charles Lindbergh and other isolationists in the 1930s and now picked up by Trump and his camp-followers. But Carlson isn’t making it. His shtick is sarcasm, condescension, and mock-incredulous double-takes. And he doesn’t hesitate to lie when it suits his purposes. After our interview, his team posted a clip on Facebook under this headline: “Col. Ralph Peters suggested that anybody who disagrees with him on Russia would also be a Hitler sympathizer. Historian Max Boot agrees.” Neither Peters nor I ever said any such thing; in fact, I’d said the opposite on his show.

Apparently, Carlson’s act gets ratings, but please don’t mistake it for a substantive contribution to the public debate. He is debasing political discourse and degrading our democracy in return for a seven-figure payday. And anyone who applauds what he is doing is guilty of, to use the word of the day, collusion in this cynical and sordid enterprise. 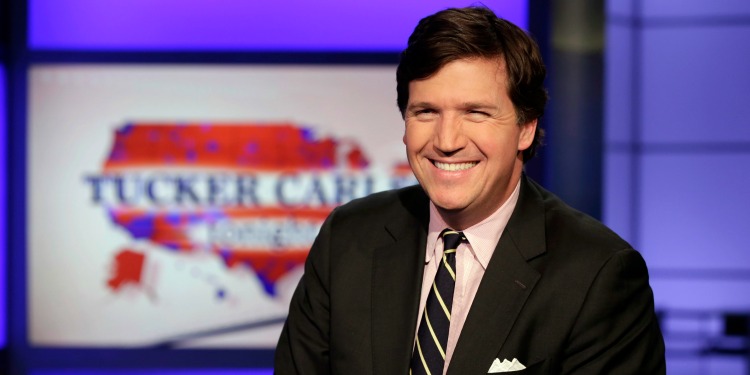