The U.S. Navy’s supremacy at sea — a reality since 1942 — is being challenged more than at any time since the end of the Cold War. Just a few days ago Russian Su-24 fighters and a KA-27 Helix helicopter repeatedly buzzed a U.S. Navy destroyer steaming in international waters in the Baltic Sea. The Navy reports: “The Russian aircraft flew in a simulated attack profile and failed to respond to repeated safety advisories in both English and Russian. USS Donald Cook’s commanding officer deemed several of these maneuvers as unsafe and unprofessional.”

Meanwhile, on the other side of the world, China is ramping up its offensive to secure control of the South China Sea. There is new evidence of how China is building up its military arsenal on Woody Island, part of the Paracel chain in the South China Sea about 250 miles southeast of China’s Hainan Island, home to a major Chinese naval base. Satellite imagery shows the presence on Woody Island of two J-11 fighter jets, comparable to the U.S. F-15 or F-18. There is also a new HQ-9 fire-control radar system on the island, comparable to Russia’s S-300, along with surface to air missile launchers that can target U.S. aircraft from 125 miles away.

China is also apparently planning to construct a new island at Scarborough Shoal that would allow it to create a military base only 120 miles from the main Philippine island of Luzon, where U.S. aircraft are now returning after having left Clark Air Force Base in the early 1990s.

Defense Secretary Ash Carter has just visited the Philippines and he is working to strengthen military cooperation with our oldest ally in Asia. The U.S. will now rotate military forces back through the Philippines and conduct joint naval and air patrols with our Philippine partner, who lacks the resources to deal with the Chinese threat on their own. The U.S. Navy is also undertaking some freedom of navigation patrols through the South China Sea to make clear the U.S. doesn’t recognize China’s claims to sovereignty.

There is more that can and should be done on both counts — to strengthen the U.S. military presence in the Philippines and to more regularly challenge China’s claims. Two patrols in six months isn’t enough!

But the largest priority is one that nobody seems to be discussing in Washington: It is the urgent need to reverse budget cuts that have cut the end-strength of all of our armed forces. The Army has been particularly hard hit, which makes it harder to deal with the growing Russian conventional threat in Europe. But while the Navy hasn’t suffered the kind of drastic downsizing that the Army is undergoing, it has become much too small to handle all of its missions. There are currently only 272 deployable Navy ships. Based on exiting requirements the Navy should have 350 ships. Unless the Navy is increased in size, it will be increasingly difficult to counter China’s power-grab which is made possible by double-digit growth in China’s defense budget every year.

It is imperative that any increase in the size of the Navy not come out of the hide of the other services, which need to grow too. Can we afford to spend more on defense? Absolutely! We are currently spending only 16 percent of the federal budget and 3.5 percent of GDP — far less than we did for decades during the Cold War.

The argument is made that we already spend far more than China; our defense budget is nearly $600 billion, theirs is around $130 billion (if you believe official figures). The U.S. has ten aircraft carriers; China only one. But that’s comparing apples and kumquats. The U.S. needs to maintain military strength everywhere from the Baltic to the South China Sea. China need only dominate its nearby waters. And China doesn’t need floating aircraft carriers when it can convert islands in the middle of the South China Sea into air bases. Moreover, China doesn’t have to worry about the ballooning personnel costs and health-care costs that are swallowing an ever-larger share of our defense spending.

It won’t happen in this administration, but the next president will need to rebuild American military strength so as to prevent rivals such as Russia and China from upsetting the delicate balance of power in Europe and Asia. 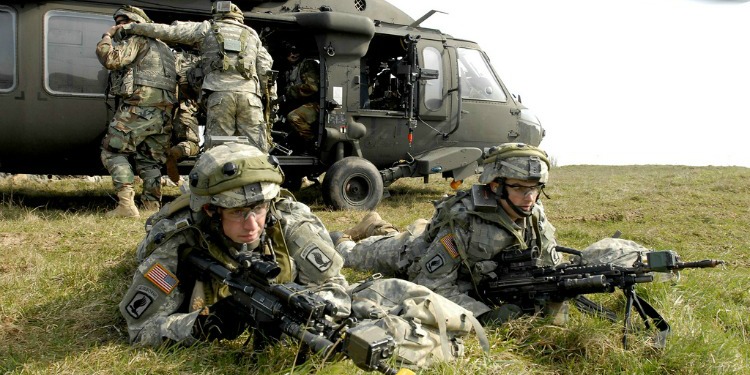 Whatâ€™s in the latest issue?