Controversies come and go so fast in the Trump administration that it’s all too easy to lose sight of individual issues. It is, therefore, worth remembering that before the events in Charlottesville grabbed public attention on Saturday, the president had been making news with his bellicose statements against North Korea and Venezuela.

Unlike many of the other victims of Trump’s invective, Kim Jong-un and Nicolas Maduro both deserve to be vilified. They are vicious dictators who show no regard for human life or the basic norms of civilized society. Kim’s villainy is of a higher order than Maduro’s—North Korea is the most repressive place on Earth—and he poses a much greater threat to the United States. Maduro isn’t developing nuclear weapons or threatening to attack U.S. territory. He does, however, deserve considerable calumny for destroying the last remnants of Venezuela’s democracy, whereas Kim Jong-un has simply continued the totalitarianism that he inherited from his father and grandfather.

It is entirely fit and proper for a president of the United States to denounce both Kim and Maduro. But that doesn’t mean that the way Trump went about is smart. He is, in fact, playing right into the dictators’ hands with his over-the-top threats.

He warned Kim Jong-un:  “North Korea best not make any more threats to the United States. They will be met with fire and fury like the world has never seen.” Far from backing down after these comments were criticized, he doubled down, saying that the U.S. was “locked and loaded” for war. If taken seriously, Trump’s comments suggest that he is prepared to wage war not in response to North Korean actions but simply North Korean words.

There is, in fact, no sign that the U.S. is getting ready for conflict. If that were the case, the U.S. armed forces would be evacuating 200,000 American civilians from South Korea and rushing in the additional forces called for under the Pentagon’s war plan—Oplan 5027. That’s not happening, and senior officials—Secretary of State Rex Tillerson, Secretary of Defense Jim Mattis, National Security Advisor H.R. McMaster, and Chairman of the Joint Chiefs of Staff Gen. Joe Dunford—all say that conflict is not “imminent.”

Trump’s saber-rattling is unlikely to cause North Korea to stop its nuclear program. If anything, Kim will only redouble his efforts in the face of this American threat, while basking in further confirmation that the U.S. really is, as his propaganda claims, a warmonger intent on destroying North Korea. With Kim already on the verge of acquiring the capability to hit the U.S. with nuclear-tipped ICBMs, either the North Korean despot will call Trump’s bluff, leading to a loss of American credibility, or he will invite a catastrophic conflict. Neither option, needless to say, is a good one.

Trump’s threat of a “military option” against Venezuela is even more misguided. The U.S. is not going to invade Venezuela no matter how many human-rights abuses Maduro commits because we don’t have any national-security interest in doing so. Normally Trump himself is the first one to argue against humanitarian interventions, but, in this case, he allowed his rhetoric to run away with him.

Whatever his motivation, the Defense Department is even less prepared and willing to attack Venezuela than it is North Korea. The only concrete consequences of Trump’s wild threat is to force America’s Latin American allies to distance themselves from Washington and to hand Maduro a propaganda victory. Like Kim Jong-un, he, too, justifies his dictatorship as a defense against Yanqui colonialism and militarism, and Trump’s words seem to provide support for his propaganda. Moreover, assuming that Trump’s words don’t lead Maduro to change his repressive policies, the failure to back up this threat will further dent American credibility.

Trump found hyperbole to be a useful tool in the real estate business and his pursuit of the White House. But a president in control of the world’s mightiest military cannot afford so much loose talk without doing grave damage to American security and running the risk of needless conflict. Many hoped that the arrival of Gen. John Kelly as White House chief of staff would lead to a more moderate tone from the president. So far it hasn’t happened, but it’s never too late for Trump to adopt Theodore Roosevelt’s motto: “speak softly and carry a big stick.” 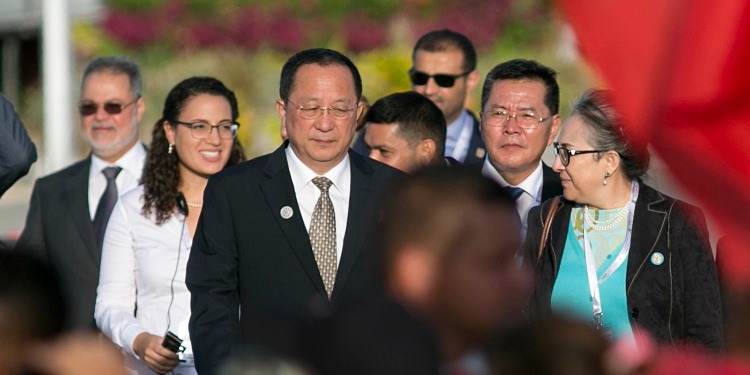