There are few more polarizing policy debates in Washington with regard to the Arab world than what the U.S. posture toward Egypt should be. The debate transcends both political party and philosophical groups. It’s easy to understand the passion of the debate: In 2011, the Egyptian public rose up against President Hosni Mubarak, who for three decades had presided over Egypt’s corrupt autocracy. Mubarak had grown Egypt’s economy, but he had left millions behind with neither hope of opportunity nor equal treatment under the law. The death of blogger Khalid Said sparked protests against police impunity that ultimately grew into a tidal wave that ousted Mubarak and his sons.

What happened next descends into a chicken-and-egg debate about who subverted democracy first, and there is no point rehashing that here. Suffice to say, Morsi quickly proved himself no democrat, although admittedly many of his opponents who sought to undermine him were hardly more democratic. Morsi’s leadership style was aloof, however, and he failed to follow through on many of his promises. Nor did he seek to govern on behalf of all Egyptians, focused instead on imposing his Islamist agenda on all Egyptians. For that and a number of other reasons, millions of Egyptians took to the streets. The Egyptian army, led by Gen. Abdel Fattah el-Sisi, issued Morsi a 48-hour ultimatum to address public concerns or the Egyptian military would take matters into its own hands. Morsi ignored the deadline, and the military ousted him. In subsequent elections, Sisi won handily.

Whether or not it was a coup (it was, in my opinion, but a necessary one), the question about whether Sisi’s putsch remains controversial. Proponents of Morsi’s ouster see a nefarious, undemocratic agenda in Morsi’s rule and doubt he would ever have submitted himself to free and fair elections. Opponents largely share the disappointment and distrust of Morsi, but feel that the democratic process should have continued to he might hang himself with his own rope rather than transform himself into a martyr.

Sisi is equally polarizing. His opponents see cynicism in his call for a reformation within Islam while his continued efforts have captured the imagination of some proponents of his rule. (Behind-the-scenes, to his credit, he has continued his efforts to reform Al-Azhar, perhaps the most important center of Sunni scholarship in the Arab world, by purging some of the more Salafis teaching there while simultaneously reaching out to Islamic thinkers who embrace a more tolerant vision of the future). Human rights abuses have also become a lightning rod, even if some groups like Human Rights Watch have allowed subjectivity and personal ego to undercut the utility of their reporting. Many analysts are concerned that the merit of any Sisi-inspired reforms will not match the cost of his abuses. “Sisi is no Pinochet,” former National Security Council official Elliott Abrams wrote in an excellent Washington Post op-ed. Others, like COMMENTARY’s own Max Boot, worry that Sisi’s crackdown on opposition and his closure of many avenues of dissent will ultimately cause more violence. I tend to be more supportive of Sisi than others, although my concern focuses less on provoking the Muslim Brotherhood—they have been, after all, a very violent organization since their inception — and more on the fact that closing avenues of dissent undercuts Sisi’s ability to have an independent assessment of his rule. Power corrupts, and a free press is essential to speaking truth to power.

The debate over Sisi in Western capitals and among journalists reached new heights last week when Sisi announced new anti-terrorism laws. As the BBC reported:

Under the new laws introduced on Monday:

Many journalists and human rights groups, already cynical about Sisi, jumped on the bandwagon to criticize the move, no matter the militancy infecting the Sinai and spreading to urban centers, including Cairo. Only some of this violence is due to the Muslim Brotherhood; far more derives from Al Qaeda and Islamic State-inspired terrorism already epidemic the Sinai and, indeed, once encouraged by Morsi. That said, there can be no rationalization of fining journalists for contradicting official accounts. It is counterproductive and wrong, no ifs, ands, or buts. If official accounts cannot be questioned, there becomes no incentive for official accounts to reflect reality.

There is merit in the other laws, however. The terrorist is not only the one who detonates a suicide vest in a crowd, but also anyone who helped assemble the vest, hide the terrorist during his training, recruit him in schools, or donate money to group carrying out the attack. Joining Hamas, Hezbollah, Al Qaeda or, for that matter, the Ku Klux Klan, is to support terrorism and attacks on civilians. If the Muslim Brotherhood engages in terrorism — and, again, it always has — then membership in it implies endorsement of its goals and tactics. As for fast-track courts? Allowing terrorists to evade justice because they must wait for court dates behind petty thieves and those accused of simple assault makes little sense. In the United States, there are any number of courts — tax courts, family courts, and administrative courts, for example. To condemn a court reserved for terrorism offenses is hypocritical. That doesn’t mean that such courts won’t be open to abuse, but that’s a different issue entirely. If abuses occur in the prosecution of alleged terrorists, then diplomats and journalists should simply pressure and expose in order to encourage a fairer process.

As for financing terror? That’s a crime not only in Egypt but in the United States as well. The more draconian sentencing requirements in Egypt are wise, however, if terrorism is going to be addressed with more seriousness than simply dismissing it as workplace violence. Financing terrorism enables it at a far greater level than the person does who puts the suicide vest or AK-47 in the terrorist’s hands, and so a life sentence makes sense.

And the criminalizing of the creation of terrorist websites and social media? It’s about time. Perhaps some human rights organizations fear perhaps with merit that the government will massage the definition of terrorism to constrain what should be legitimate criticism, but the answer to that is simply to push for international consensus on the definition of terrorism rather than the à la carte approach embraced by governments and human rights groups today. Sisi is right to understand that the Internet is overtaking interaction with recruiters in person as a driver of terrorism. Most Moroccans joining the Islamic State, for example, are recruited not in mosques but rather online by radicals based in Europe. If the European Union and United States were to go after Internet jihadis and those enabling them with the same seriousness of purpose, terror recruitment would be more difficult and the world would be considerably safer as a result.

There are very legitimate reasons to criticize Sisi, or at least be concerned by some of his choices and policies. At the same time, however, he is governing with a seriousness of purpose that goes beyond simple pursuit of power or self-enrichment. That is not often seen in the region, and given the stakes; it is essential that the West not throw the baby out with the bathwater. Just as not every action taken by Sisi deserves automatic support, not every law enacted is without merit. Indeed, some are necessary. 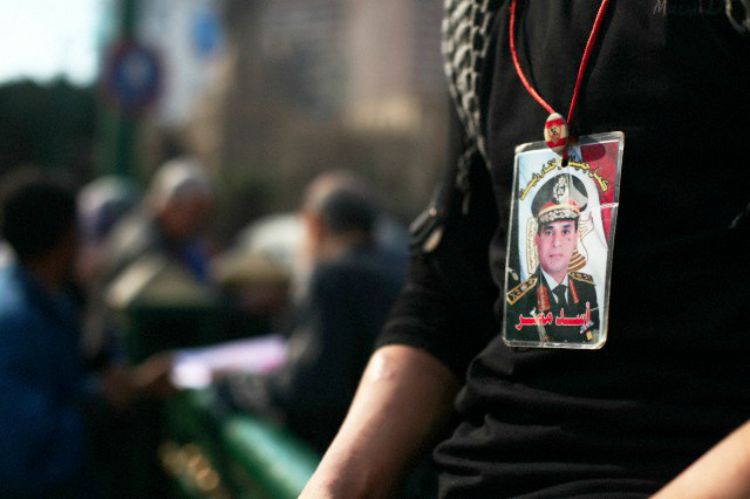