Once upon a time, the European Union prided itself on human rights a “core aspect of European identity.” When Klaus Kinkel became Germany’s foreign minister on May 18, 1992, he declared promotion of human rights to be a top priority, at least rhetorically. Behind-the-scenes, though, Kinkel seemed to salivate at the Iranian market.  By 1987, Germany already accounted for more than a quarter of Iran’s total imports, but Germany wanted more. Iran, after all, was an impressive market; oil-rich and in desperate need of investment after eight years of a devastating war. So, the Clinton administration promoted “Dual Containment,” Kinkel and his European colleagues argued that Iran was simply too important to isolate.

On December 12, 1992, the European Union endorsed Berlin’s proposed “critical dialogue,” in which European governments would correlate trade with Iranian improvements on human rights and Tehran’s conformity with international norms of behavior. The European Council declared, “The European Council reaffirms its belief that a dialogue should be maintained with the Iranian Government. This should be a critical dialogue which reflects concern about Iranian behavior and calls for improvement in a number of areas, particularly human rights, the death sentence pronounced by a Fatwa of Ayatollah Khomeini against the author Salman Rushdie, which is contrary to international law, and terrorism.” Just as Obama does today, European officials assumed that increasing trade would strengthen the hands of pragmatists. Simply put, Berlin believed it could achieve more by dialogue than coercion.

In December 1993, European Commissioner Hans van der Broek met British Indian author Salman Rushdie to assure him that improvements in human rights, the lifting of Ayatollah Khomeini’s death fatwa, and greater respect inside Iran for international law would be essential preconditions for the establishment of closer EU-Iran ties. They weren’t. Iranian officials did not take the new approach to heart. Instead, they arrested German citizens in Iran, more often as bargaining chips than on any evidence-based charges. And while Kinkel and his cohorts paid lip service to human rights, Tehran soon made clear it had little patience for the dialogue aspect of trade. By 1995, German exports to Iran had increased to $1.4 billion, more than twice the level of any other country.

Broader European trade also flourished. By 1996, economic and trade relations between the European Union and the Islamic Republic was worth $29 billion. After re-establishing trade, European leaders dropped any presence of calibrating relations to about human rights. In July 1997, for example, at a time when the European Union had suspended dialogue with Iran, Italian Prime Minister Romano Prodi sent a high profile trade delegation to Tehran with promised of $3 billion credits. That same year, a consortium led by the French oil company Total signed a $2 billion agreement to develop Iran’s oil resources.

Iranian used the cover of dialogue and the promise of moderation to accelerate their nuclear ambitions. Meanwhile, Salman Rushdie remained a marked man and Iranian terror sponsorship continued apace. Germany, Britain, and France sidestepped substantive issues with smoke-and-mirrors. Its hostages freed, the French government, for example, denied any evidence that the Islamic Republic continued to sponsor terrorism. “There is no evidence,” Yves Doutriaux, a French foreign ministry spokesman, told a French television interviewer in August 1996, even as the U.S. government found Iranian involvement in a string of assassinations, weapons shipments to terrorists (including sending mortars to an Iranian agent in Germany), and support for Hamas, Hezbollah, and Palestinian Islamic Jihad. Likewise, the German government denied that any concrete evidence existed that suggested Iranian nuclear activities ran counter to its Non-Proliferation Treaty obligations, although the International Atomic Energy Agency subsequently exposed this lie.

As for human rights, they actually worsened. In 1995, for example, Iranian authorities passed a law combining the role of prosecutor and judge in court. Persecution of Baha‘is, Jews, and Christians increased, and censorship remained heavy-handed. Between 1992 and 1996, the Iranian government refused to allow a UN Special Representative on the Human Rights Situation in Iran to visit the country. While Maurice Copithorne, the new UN Representative, sought to report positive trends in the summary of his 1997 report, his characterizations were by his own admission, more “straws in the wind,” and hope that the new Khatami government would liberalize society. However, he acknowledged little evidence “that would support the proposition that sustained progress [was] under way.” Indeed, while the UN human rights rapporteur may have sought improvement in the Iranian human rights situation to support the idea that engagement was working, the evidence suggested otherwise. Between 1995 and 1996, the height of Critical Dialogue, Iranian use of the death penalty doubled. Also against the backdrop of critical dialogue, Iranian hit men slaughtered Kurdish dissidents in downtown Berlin. A few were captured and, after a long court case, eventually found guilty. As a result, on April 29, 1997, the European Union suspended its critical dialogue and every member with the exception of Greece withdrew its ambassador from Tehran. Here, Europe’s true cynicism became clear, for while the ambassadors came home and the European Union decided to suspend high profile ministerial visits, it exempted trade delegations. Hassan Rouhani, at the time deputy speaker of the Iranian parliament, turned Europe’s critical engagement logic on its head and declared, “So long as we see no change in the behavior of this Union and are not convinced of its good will…we shall consider that the continuation of the critical dialogue is futile.”

Fast-forward to the present day: Europe continues to play fast and loose with the rhetoric of human rights, but it is telling that nothing in the agreement reached frees hostages, advances religious liberty, curtails terrorism, resolves the cases of political prisoners, betters the lot of women, or ends the horrific public executions for which the Rouhani administration has become famous. When push comes to shove, all the European Union cares about is trade and cash. It’s time to stop pretending European politicians, whether Greens, Social Democrats, Christian Democrats, Tories, Labour, or any other flavor care about anything else. 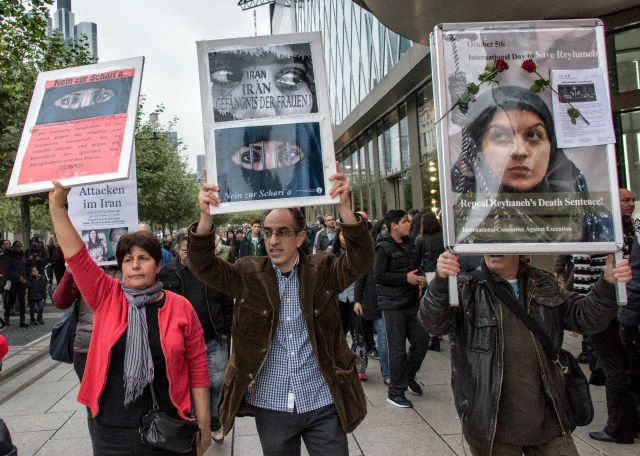