At both The Weekly Standard and the Jerusalem Post, the Foundation for Defense of Democracy’s Benjamin Weinthal exposes German intelligence reports that suggest that the Islamic Republic of Iran continues to work toward the goal of possessing nuclear weapons. He writes:

A report from the state of Hamburg holds that “there is no evidence of a complete about-face in Iran’s atomic polices in 2016” [after the Islamic Republic signed the JCPOA deal with Western powers in 2015, aimed at restricting Tehran’s nuclear program in exchange for sanctions relief]. Iran sought missile carrier technology necessary for its rocket program.” The report noted that the federal prosecutor filed criminal charges against three German citizens for violations of the export economic law due to the deliveries of 51 special valves to Iranian company that can be used for the Islamic Republic’s sanctioned Arak heavy water reactor. The installation, the intelligence officials wrote, “can be used to develop plutonium for nuclear weapons.” Iran pledged, under the JCPOA deal, to “dismantle the [Arak] facility,” the intelligence report states. On the proliferation of atomic, biological and chemical weapons, a second report from Baden-Württemberg’s state intelligence agency report states: “Regardless of the number of national and international sanctions and embargoes, countries like Iran, Pakistan and North Korea are making efforts to optimize corresponding technology.”

In short, it looks like Iran may be cheating. As I document in Dancing with the Devil, whenever reports of cheating threaten to derail non-proliferation agreements, governments invested in those agreements are willing to bury the evidence to make a quick buck. Often, the State Department is willing to look the other way in order to keep the process alive. That was the case with Iraq in the 1980s, North Korea in the 1990s, and Iran in the first half of the last decade.

With regard to Germany, however, the triumph of appeasement over intelligence is déjà vu all over again. Just months after Klaus Kinkel became Germany’s foreign minister in 1992 and launched an initiative to bring Iran in from the cold through enhanced trade, Iranian assassins and Hezbollah operatives struck in the heart of Berlin, murdering four Iranian Kurdish dissidents at the Mykonos Restaurant. While several of the assailants fled Germany, German police arrested Hezbollah operative Abbas Hossein Rhayel and several accomplices. Subsequently, however, German officials intervened to prevent the questioning, let alone the arrest, of Intelligence Minister Ali Fallahian who had traveled to Germany and was suspected of ordering the hit.

Bernd Schmidbauer, Chancellor Helmut Kohl’s top intelligence advisor and the coordinator for Bonn-Tehran intelligence ties, continued to engage Fallahian after the assassination.  As Charles Lane, at the time a senior editor for The New Republic, described:

On October 17, 1993, the glass doors of the Kanzleramt, Kohl’s office complex in Bonn, opened to receive an unusual guest: Ali Fallahian, the chief of Iran’s foreign intelligence service… Fallahian was treated to several days of respectful meetings, including a tour of the German Federal Intelligence Agency headquarters outside Munich.”

While Schmidbauer said that the engagement focused on humanitarian issues, both the Iranian ambassador and other German officials suggested otherwise.  A German official speaking anonymously to Der Spiegel, ridiculed that claim, saying, “Whoever says that only humanitarian subjects were discussed is a brazen liar.”

Der Spiegel subsequently reported that the German intelligence service had supplied four computers and photographic equipment to Iran and helped train Iranian intelligence agents. Meanwhile, despite the evidence of Iranian-sponsored terrorism on German soil, German-Iranian trade ballooned. By 1995, German exports to Iran had increased to $1.4 billion, more than twice the level of any other country, and Germany became Iran’s largest trading partner. German newspaper Handelsblatt described the mood of German businesses at the Tehran trade fair as “euphoric.” Even after the 1997 Berlin court verdict, which founded Fallahian and other senior Iranian officials guilty of ordering the hit against the Kurds, Christoph Wolf, spokesman for the German Congress of Industry and Commerce, advised German firms to continue their trade with Iran and not to be distracted by “political matters.”

German diplomats have not only been willing to excuse Iranian terrorism, but also nuclear cheating. On November 20, 2003, IAEA Director Mohamed ElBaradei reported that there was a “deliberate counter effort that spanned many years, to conceal material, facilities, and activities that were required to have been declared under the safeguards agreement – material, facilities, and activities that covered the entire spectrum of the nuclear fuel cycle, including experiments in enrichment and reprocessing.” Despite finding that Iran had been developing a uranium centrifuge enrichment program for 18 years, and a laser enrichment program for 12 years, German Foreign Minister Joschka Fischer corralled European Union authorities to give the Islamic Republic another chance.

German leaders might preach human rights and the virtues of multilateralism, but when it comes to the Islamic Republic, the German government’s desire to promote business always trumps holding Iran to account. Yes, Iran likely seeking to renew and advance its nuclear weapons program. Iranian leaders correctly calculate that even if they paraded a nuclear missile through the streets of Tehran or tested a warhead in their southeastern desert, German authorities would embrace any excuse however implausible to look the other way, deny reality, and run interference; all in order to keep trade channels open. 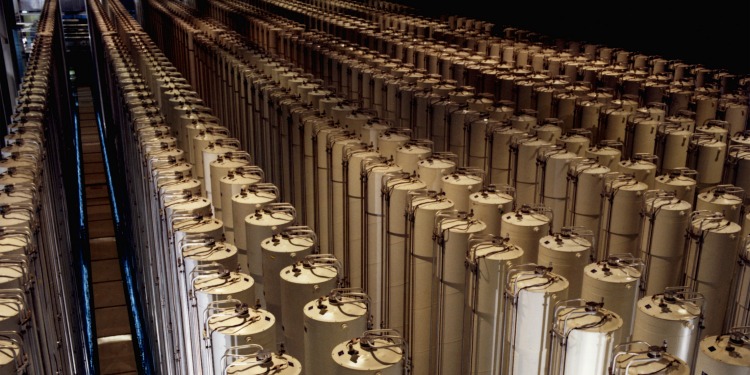