The British Journal of Global Health has found that the idea that sanctions on Iraq killed 500,000 children was a fiction dreamed up by Saddam Hussein’s government to fuel propaganda against the West. Liz Sly at the Washington Post reported:

“The government of Iraq cleverly manipulated survey data to fool the international community,” the report said, describing the figure of 500,000 deaths as “a massive fraud.” “Following its creation and dissemination the deception received considerable attention and was widely believed to be true. Moreover, it continues to be influential,” said Tim Dyson and Valerie Cetorelli, who wrote the report and are with the London School of Economics. “Unfortunately, however, the more mundane truth that has emerged has received much less attention than the original spectacular lie.”

The origin of the 500,000 dead children calumny was an issue which I had addressed in the Middle East Review of International Affairs in 2001, after returning from an academic year teaching in Iraqi Kurdistan.

In short, UNICEF laundered propaganda for the late Iraqi President Saddam Hussein. Saddam’s government refused the United Nations to conduct its own surveys inside Iraq and so UNICEF accepted figures provided it by Saddam’s Ministry of Health. Using those figures, UNICEF estimated that sanctions killed 1.2 million Iraqis. Some non-governmental organizations—the International Action Center, for example—placed the number even higher.

Amatzia Baram, at the time a professor at the University of Haifa and a decades-long expert in Iraq, was the first voice to disprove allegations that sanctions had led to mass death in Iraq. To do so, he compared the country’s population growth rates over the last three censuses and found almost no difference between Iraq’s population growth rate between 1977 and 1987 (35.8 percent) and over the following decade (35.1 percent).

There were other warning signs to suggest that the UNICEF report was detached from reality. UNICEF suggested the mortality rate for children under five-years-old and the infant mortality rate increased after the adoption the oil-for-food program doubled caloric intake for Iraqis. This should have raised red flags about the veracity of the report because it would mean that the reduction of sanctions increased child mortality. The UNICEF study also said that child mortality had more than doubled, but neither independent observers in Iraq nor Iraqis traveling abroad ever reported seeing a rise of such huge magnitude.

While the 1999 UNICEF report made headlines the world over, global media largely ignored a September 2000 Food and Agriculture Organization report, written in collaboration with the World Health Organization, which found half of Iraq’s population to be overweight and hypertension and diabetes among the leading causes of death in Iraq. These are hardly the diseases of the starving.

In short, the British Journal of Global Health rehashes old ground, although its repackaging is welcome. While Iraqis understand that Saddam’s figures were simply a prequel to the fabulism of Saddam’s former Information Minister Mohammed Saeed al-Sahhaf, a.k.a “Baghdad Bob,” the damage caused by UNICEF’s falsehoods deserve a response.

Carol Bellamy was UNICEF executive director at the time of the report. She bore ultimate responsibility, therefore, for the decision to accept Saddam’s statistics blindly despite Iraq’s refusal to allow independent surveying. After the publication of the report, she worked overtime to publicize it and dismissed out of hand any questions about methodology, telling Slate, for example, that “UNICEF’s data on Iraqi child mortality rates haven’t been disputed” when, indeed, they had. The report also credits the World Health Organization’s Iqbal Shah for “reviewing the survey methodology, fieldwork techniques, data cleaning processes, data checks and the first drafts of the survey report,” and Mohammad Ali of the London School of Hygiene & Tropical Medicine for heading a team of consultants putting together the report. Both Ali and Shah subsequently published an article, “Sanctions and Childhood Mortality in Iraq,” in the British medical journal The Lancet, doubling down on their findings. (The Lancet, of course, later made headlines for publishing highly inflated Iraqi death tolls in the wake of Operation Iraqi Freedom).

It’s time to make funding for UNICEF contingent on an internal UNICEF investigation into how it got Iraq so wrong. UNICEF, of course, will say that any accountability in terms of funding suspension or cut backs would hurt children, but UNICEF is not the only organization that helps children. UNICEF should report in detail how the errors occurred, and apologize to both the Iraqi people for playing a part in Saddam’s propaganda and to the United States for how it fanned—perhaps deliberately—anti-Americanism.

But what about Bellamy? On September 27, 2013, Secretary of State John Kerry and his Turkish counterpart, Ahmet Davutoglu, announced the decision to create a Global Community Engagement and Resilience Fund to support efforts to counter violent extremism. They put Bellamy in charge of the Geneva-based fund. Given the definitive findings that UNICEF got so much wrong under Bellamy’s leadership, Congress and the Trump administration would be right to demand her resignation. Leadership is not an entitlement and mistakes matter. 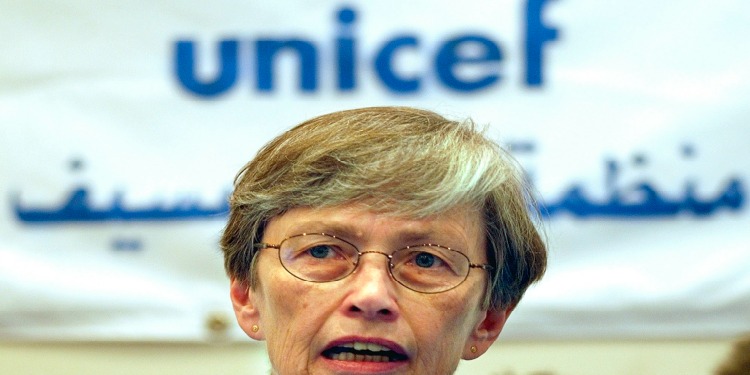