The Syria Campaign, an advocacy group, has put together a meticulous report arguing that the United Nations has hopelessly compromised itself by agreeing to the Syrian regime’s terms and filtering money and aid through the Syrian government. The Executive Summary minces no words:

By choosing to prioritize cooperation with the Syrian government at all costs, the UN has enabled the distribution of billions of dollars of international aid to be directed by one side in the conflict. This has contributed to the deaths of thousands of civilians, either through starvation, malnutrition-related illness, or a lack of access to medical aid. It has also led to the accusation that this misshapen UN aid operation is affecting – perhaps prolonging – the course of the conflict itself.

Alas, this is absolutely true. The real tragedy is that the UN’s decisions and compromises were eminently foreseeable. After all, Secretary-General Ban Ki-Moon is simply following the precedent established by his predecessors Kofi Annan and Boutros Boutros Ghali, and their dealings with Iraqi President Saddam Hussein, alas, with the same exact results.

The story of the UN betrayal of Iraqis starts in the wake of the U.S.-led coalition’s liberation of Kuwait.  While UN Security Council 687 maintained the sanctions on Iraq after the liberation of Kuwait, it also allowed Iraq to import food, medicine, and other humanitarian goods. In May 1991, the UN Inter-Agency Humanitarian Program formed to meet the needs of the most vulnerable Iraqis and, between 1991 and 1996, the fund disbursed close to $1 billion.

In order for Iraq to provide for its own humanitarian needs, on August 15, 1991, the Security Council adopted resolutions 705 and 706, which allowed Iraq to sell its oil in order to acquire revenue to purchase essential humanitarian supplies. Saddam Hussein, like Bashar al-Assad, sought to hold his people hostage and leverage their suffering into advantage. Accordingly, he refused to accept the resolution. Pictures of sick children—even if their suffering was the result of the Iraqi government withholding rations and humanitarian supplies—were too valuable a propaganda tool to lose.

Again, the international community sought to facilitate the influx of food and humanitarian supplies into Iraq, and again Baghdad resisted. On April 14, 1995, the UN Security Council passed Security Council Resolution 986, the so-called “oil-for-food” program. Declaring the need for the “equitable distribution of humanitarian relief to all segments of the Iraqi population,” the Resolution provided for the creation of an escrow account into which purchasers of Iraqi oil could make full payment, and from which the United Nations would purchase supplies and monitor their distribution. Again, Saddam Hussein refused to cooperate with the program.

The UN was not willing to declare its position untenable and forfeit the billions of dollars which the program awarded it for overhead and salaries. Boutros Boutros Ghali authorized negotiations with Saddam’s government and, on May 20, 1996, the secretariat agreed to Memorandum of Understanding (MOU) for implementation of Security Council Resolution 986.  Among other compromises, the MOU allowed the Iraqi government to contract directly with suppliers and be the sole body allowed to request supplies. In exchange, the Iraqi government committed to assist UN personnel and provide them with freedom of movement within Iraq. It was one thing for the Iraqi government to pledge cooperation, but quite another thing to make good on its promise. On average, the Iraqi government denied 55 visas per year to UN personnel. Any UN contractor who performed their functions too professionally or refused to defer to Saddam’s political concerns soon found themselves unemployed.

In the end, the Iraqi government spent less than 25 percent of its oil income on humanitarian programs. Iraqis suffered under sanctions, but only those whom Saddam wanted to suffer. Under the UN’s gaze, Saddam Hussein denied food and medicine to Iraqi Shi‘ites, even while the Iraqi government exported baby food to make money. Meanwhile, Saddam’s government spent several billion dollars in diverted funds on palaces, his family, his friends, and corrupted UN officials.

What is going on today in Aleppo is a tragedy. The media might not pay much attention, but already observers say the suffering in Aleppo and the UN’s betrayal of those suffering under siege is worse than what occurred in Srebrenica and, the bloodshed and dislocation also promises to surpass that of Rwanda 22 years ago.

As the UN prepares to elect a new Secretary General, it is long past time to consider that position not one of international diplomat and gadfly commentator, but rather as someone who can whip the UN bureaucracy into shape and prevent its complicity in such tragedies. Simply put, it should not be the job of the United Nations to compromise with dictators. If dictatorships do not allow UN assistance to go where it needs to go, then the UN should withdrawal its presence and allow military powers to do what can be done by other means to break sieges, offer protections, and provide relief.  To do otherwise simply allows mass murderers like Saddam Hussein and Bashar al-Assad to use the UN as a shield and perhaps a piggy bank enabling their regimes’ dirty work. 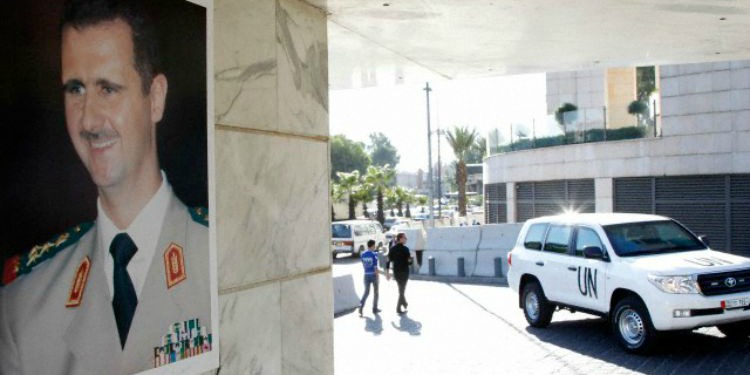