Hostage-taking is nothing new for the Islamic Republic. Indeed, since revolutionary students acting on behalf of Ayatollah Ruhollah Khomeini first seized the U.S. Embassy on November 4, 1979, hostage-taking has become a central pillar of Iranian policy. For authorities in Tehran, the reason for hostage-taking is simple: It’s a strategy which has repeatedly paid off. The Carter administration rewarded Iran with millions of dollars and diplomatic concessions. Ronald Reagan, for all his tough rhetoric as a campaigner, did likewise with the arms-for-hostages policy, a scheme that backfired when Iran seized even more hostages once it had received the last delivery of weaponry and spare parts.

President Obama likewise rewarded Iranian hostage-taking by paying Iran over $1 billion for the release of imprisoned Americans, although he inexplicably left Robert Levinson, the longest-held American hostage, behind.  No sooner had the U.S. government transferred the ransom in cash to a waiting Iranian plane (controlled by the Islamic Revolutionary Guard Corps), then Iranian security forces seized several more Iranian Americans and permanent residents, most prominently Iranian American businessman and political activist Siamak Namazi and his father, Baquer.

What makes Wang’s arrest and imprisonment different is that Wang presumably had an Iranian visa. Americans must get a visa in advance and, on the off-chance Wang was traveling on a Chinese passport, he would likely also have required a visa, although there is some wiggle-room for Chinese citizens with confirmed bookings in five-star hotels.

Other Americans who were arrested in Iran in the years since the Embassy seizure were traveling on Iranian passports: Iran does not recognize dual citizenship for Iranians and requires Iranian-Americans to travel on Iranian documents. Renouncing Iranian citizenship takes an act of Iran’s parliament, and so it is beyond the means for pretty much every Iranian-American. The Iranian government has no desire to ease that restriction for both ideological reasons—it’s hard to demonize “the Great Satan” when so many Iranian citizens want to live in the United States—and because the requirement for Iranian-Americans to register births and keep passports current is a cash cow for the Iranian foreign ministry. When Iran has seized Americans, there, it has operated under the legal fiction that those arrested were simply Iranian citizens. Often, Iranian diplomats tell State Department and the Swiss diplomats who look out for American citizen interests in Iran to buzz off.

Levinson was a slightly different case: He traveled without a visa to Kish Island, an Iranian free trade zone which is visa-free (but which is dominated by the Islamic Revolutionary Guard Corps’ business interests). Regardless, the fact remains: previous Americans seized in Iran were not traveling on U.S. passports with Iranian visas.

Wang’s arrest hits home for me as I went to Iran—with proper Iranian visas in my passport—for a total of seven months while I was working on my history Ph.D. Since I received my doctorate and since I won’t self-censor what I think or write about the Iranian regime in order to gain access, I have since been unable to get the Iranian visa, even when I have been invited for academic conferences in my field. There’s never an outright rejection—just an endless series of “maybe tomorrow”—until the conference has come and gone. For academics and other Americans, however, there was always an understanding, that if the Iranian foreign ministry (and behind-the-scenes, the Iranian intelligence ministry) issued a visa and the visa-holder behaved him or herself, there would be no serious problems.

So what does Wang’s arrest mean? First, he represents the human cost of the Obama administration’s willingness to pay ransom. Second, that the security forces and judiciary targeted him suggests both that they have augmented and consolidated control despite all the Western self-deception about Iranian moderation and also that they wish to humiliate the United States. Wang’s arrest is also a signal by those who control Iran that Americans should think twice about traveling to the country. The New York Times may profit handsomely from its Iran tours, but Iran may profit more if they refuse to allow one or more of those tourists to depart.

No hostage-taking is acceptable, and the fact that any Western diplomat would trust, let alone tolerate, their Iranian counterparts absent an Iranian renunciation of the practice past and present reflects poorly on both the United States and Europe. The fact that Iran targeted an Iranian visa holder rather than an “Iranian citizen” suggests the Islamic Republic is crossing lines even they have long avoided. 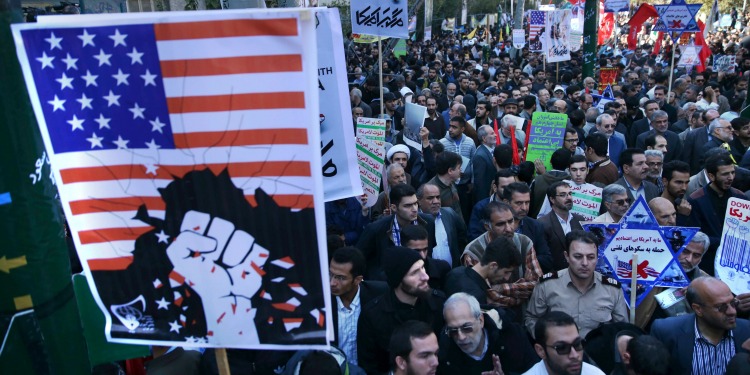