Against the backdrop of recent Islamic State (ISIS, ISIL, Daesh) gains in Ramadi and Palmyra, a number of American diplomats, pundits, and military analysts have argued that U.S. interests would be better served bypassing Baghdad and supplying arms directly to Sunni tribes and/or Kurdish Peshmerga. Other pundits have even gone so far as to revive then-Senator Joseph Biden’s proposal to divide up along ethnic and sectarian lines. Both such proposals are wrong-headed, and not only detrimental to Iraqis, but they would also be disastrous for U.S. national security. Some of these proposals are based on myths, and others simply misunderstand Iraqi politics and society. Sometimes, it’s necessary simply to debunk falsehoods:

First, is Iraq an artificial country? Those who suggest dividing Iraq often suggest it was an artificial country, merely the result of British diplomats and adventurers drawing lines on map after World War I. The actual situation is more complicated. Even if its borders were haphazardly drawn, the concept of Iraq, much as the concept of Syria, Egypt, or Yemen, dates back centuries if not millennia. Nineteenth century Persian diplomatic correspondence references Iraq, but the name Iraq dates back to before the coming of Islam, and often appears in medieval Arabic literature. Regardless, even if a Western diplomat or historian wanted to label Iraq a completely artificial country, the fact of the matter is that it has existed within the same set of borders for nearly a century; 95 years of a common history within common boundaries builds identity.

Second, why not divide Iraq anyway? Recently, some pundits have revived the idea of dividing Iraq. Let’s pretend that ethnic and sectarian divisions are clear cut (they’re not) and that division wouldn’t Certainly, the Kurds want independence, but Iran—fearful of how that precedent might impact Iran’s own restive Kurds—have made clear that they will spare no means to sabotage that ambition. As for the Sunnis, how would division and independence resolve the problem of the Islamic State? Simply put, it wouldn’t: Rather, a Sunni entity would simply normalize the Islamic State. And if the fear is Iranian dominance of Iraq, then stripping away the Sunnis and the Kurds simply makes Iranian dominance over a Shi‘ite rump state easier.

Third, isn’t the Islamic State the result of political failures in Baghdad ? No. There have been failures in Baghdad, but the Islamic State neither formed in a day in reaction to former Prime Minister Nouri al-Maliki’s raid on a protest camp in Al-Anbar, nor would a broad-based government that incorporates everyone to their maximum demands resolve the problem. Sure, some Sunni political activists feel disenfranchised by the largely Shi’ite political order? Certainly, but there are many outlets for political discord. Enslaving women, burning children, defenestrating gays, and filling mass graves are the symptoms of psychopathy, not legitimate political protest. Nor do proponents of the idea that Baghdad causes the Islamic State consider that group’s presence in countries like Libya where sectarianism is not a concern. Simply put, political grievance isn’t the common denominator; rather, an extreme reading of Sunni Islam is.

Fourth, why support Iraq when its army doesn’t fight? Ashton Carter is probably the secretary of defense with the best command of defense issues in a generation, but his remark that the Iraqi Army had “no will to fight” at Ramadi was not only factually incorrect but also insulting and tone deaf. After all, the Iraqi Army (and the hashd, the popular mobilization forces) had fought in Ramadi for months before their collapse amidst an Islamic State assault involving multiple truck bombs. While the Kurdish Peshmerga had anti-tank missiles, the United States had not provided them to the Iraqi army. It had nothing in its arsenal to take out the armored trucks before they put Ramadi’s defenders in the kill zone. And as for American airpower? At the critical moment it was nowhere to be found. So much for all the assurances from the Obama administration that, post-withdrawal, the United States could (and would) provide security or gather adequate intelligence.

Fifth, Did Baghdad betray “the Surge?” No. The surge was good military strategy in the short-term, but it ensured long-term political instability. When assessing the surge, it’s crucial not to allow hagiography for some of the American commanders trump the reality of what the surge meant for Iraqi politics. The problem was that the surge was based on the notion that violence could bring both financial reward and political power. Rather than demand that Sunni politicians accept the post-2003 order, it empowered them absent any permanent acceptance on their part of the post-Saddam political order. Many of the entities the surge created were just as sectarian and contrary to the constitution as the Popular Mobilization Forces are today. As for the Sunni tribes, there’s often a conceit in America that when they work with American forces, it is because of a match of mind and heart but when they work with terrorists, radicals, and insurgents, it is something else entirely. The fact of the matter is that allegiance is transient for many tribes, and that it is poor policy to assume that any amount of political concession can permanently recruit them onto the right side. At the very least, the surge as with de-Baathificaton created a political Trojan horse and, more likely, set the stage for a bidding war for loyalty that the United States could never win.

Sixth, but wasn’t Prime Minister Nouri al-Maliki pro-Iranian after 2010? Sure, Nouri al-Maliki began leaning evermore toward the Iranians after the White House announced its intention to withdraw from Iraq, and he grew more sectarian as he had to fend off challenges from various Shi‘ite parties that accused him of being too moderate. But, why should that surprise? Iraqi politicians are, well, politicians. Why can Secretary of State John Kerry be for something before he was against it and not expect Iraqi politicians to be equally venal and opportunistic? The same holds true for Ahmad Chalabi, Ibrahim Jaafari, Masoud Barzani, and Jalal Talabani. It really is amazing that American politicians feel they can scapegoat foreign counterparts and just expect them to take it.

Seventh, why not give arms directly to Sunni tribes or the Kurdish Peshmerga? Given the rapidly changing loyalties of the Sunni tribes, arming them directly would be akin to arming Al Qaeda. It’s the same quixotic quest as searching for moderate Syrian opposition four years after their betrayal. Iraqi forces fleeing the Islamic State abandoned weaponry, and that’s bad. But many Sunni tribesmen and former regime elements simply joined the Islamic State. And, as for the Kurdish Peshmerga: First, the Kurds have been acquiring weaponry directly for several years and, second, Kurdish leaders continue to stockpile that weaponry for their own political benefit rather than deploy it where it’s needed. To work outside of Baghdad and arm the Sunnis and Kurds directly is the single best action to take if the goal is to undercut Prime Minister Haider al-Abadi and give the pro-Iranian factions the perfect talking point to bash anyone that suggests considering let alone deferring to the American position.

Eighth, why not work with Iran to defeat terrorism in Iraq? Make no mistake: Iran is just as much of a threat to Iraqi sovereignty and regional security as is the Islamic State. If the Iranian government were really so antagonistic to the Islamic State, however, then perhaps in the years before the United States became involved in an air campaign against the Islamic State in Syria, then Tehran would have had its client, Syrian President Bashar al-Assad, use his air force to bomb the Islamic State’s headquarters in Raqqa rather than use his then-uncontested control of the skies to drop barrel bombs on civilians. Even if Iranian leaders have come to recognize the threat the Islamic State poses, they are not an altruistic power. It is the Qods Force—and not ordinary Iraqi volunteers joining the fight against the Islamic State—that promulgate corrosive sectarianism. It should be the goal of the United States to ensure Iraqi sovereignty and defeat all extremism, not simply swap one flavor for another. 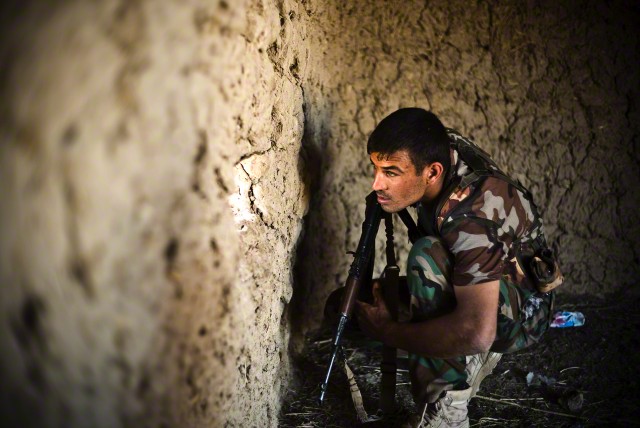