President Barack Obama has complained multiple times about nefarious lobbies lined up against the Iran deal. Alongside the president, many proponents of the Iran deal negotiated by Secretary of State John Kerry argue that there can be no honest reason for the unease and outright opposition to the deal among some politicians other than nefarious money from lobbyists who want war or, at the very least, want to maintain the tense status quo between Tehran and Washington.

It is a theme supporters of the Iran deal have picked up. Trita Parsi, an Iranian-Swede who leads the National Iranian American Council (NIAC) and once declared that everything he does, he does for Iran, marked Senator Harry Reid’s endorsement of the deal by declaring it a defeat for big money, a silly statement given Reid’s own partisanship and acceptance of myriad campaign contributions from lobbying groups. “The Iran Project,” likewise reported, “In efforts to sway Iran debate, big-money donors are heard.” The news media has played along. “Big Money and Ads Clash Over Iran Nuclear Deal,” USA Today reported.

The irony, however, is that many of the staunchest proponents of the Iran nuclear deal feed from the same trough of cash supplied by the Ploughshares Fund, a multimillion-dollar group which defines itself as a foundation seeking nuclear disarmament but which has, for several years, taken a consistently apologetic line toward Iran. Now, too often analysts throw around discussion of funding to cast aspersions on those who disagree with them in the policy debate. Often, this is nonsense. Few analysts on either the left or the right are blank slates that simply follow the money. Those staffing NIAC, for example, have always sought an end to sanctions against the Islamic Republic of Iran. Many had worked for Atieh Bahar, a Tehran-based consultancy close to former Iranian President Ali Akbar Hashemi Rafsanjani. They are not chameleons, changing their stripes to match their funders. When NIAC policy director Reza Marashi, an Atieh Bahar alum, worked for the State Department during the George W. Bush years, he was not pro-democracy agenda, but was understood to be sympathetic to an embrace rather than isolation of Iran. Indeed, his persistent questions about the recipients of U.S. aid inside Iran raised security concerns. Likewise, when NIAC received a couple hundred thousand dollars from the National Endowment for Democracy, Trita channeled it to organizations close to the Iranian government.

Not everyone is so ideologically consistent, however, or honest when it comes to the issues about which they profess objectivity. This has certainly been the case-in-point when it comes to the Joint Comprehensive Plan of Action (JCPOA) negotiated by Secretary John Kerry and his Iranian counterpart Mohammad Javad Zarif. Usually, an indicator of a flawed agreement is its failure to win bipartisan support. The opposition party, in such cases, is usually not to blame; rather, partisan votes on international agreements usually historically suggest an attempt to leverage party loyalty over national security. In the case of the JCPOA, to reach agreement, Kerry shredded at least a dozen redlines. The idea that the JCPOA represents the best possible agreement and the toughest peacetime verification regimen is demonstrably false: After all, both South Africa and Libya subjected themselves to far greater and intrusive mechanisms. Then why is it that groups like the Arms Control Association seem to swear by the agreement and have even attested to the thoroughness of the agreement before its details were even negotiated? Here, the 2014 Ploughshares Fund report may provide a clue. The Ploughshares Fund describes itself as “support[ing] the smartest minds and most effective organizations to reduce nuclear stockpiles, prevent new nuclear states, and increase global security.” What it has done in recent years, however, is to organize and fund a broad-based lobby to exculpate the world’s worst violators of the Nuclear Non-Proliferation Treaty in pursuit of a new progressive agenda. Most recently, its money has come to play in cobbling together ostensibly independent support for the Iran deal.

For example, Ploughshares gave the Arms Control Association $210,000 for “influencing…US policy toward Iran,” and then another $25,000 for an expert workshop and press briefings. It gave the Atlantic Council, a think tank that has garnered a reputation as Washington’s most mercantile, pay-to-play academic institution, $80,000 to support the Iran Task Force and another $130,000 for the South Asian Program. In effect, Ploughshares pays the salary of the Atlantic Council’s chief Iran hand that has consistently amplified Tehran’s own policy positions in her analysis and programming. It funded the Center for New American Security to give “boot camps” to Congressional staffers “on the nature of Iran’s nuclear program,” in other words, to lobby them. It underwrote the Friends Committee on National Legislation’s efforts “to support an integrated lobbying strategy to build support for pragmatic approaches to resolve the Iranian nuclear issue.” It gave the left-wing group J Street $100,000 to “educate” on behalf of an Iran deal. The National Iranian American Council? Over $150,000 for its advocacy on behalf of the Iran deal, and that doesn’t include money given individually to its staff. National Security Network? $75,000 to “educate media and policymakers about policy options to prevent Iran from acquiring a nuclear weapon.” The National Security Network’s home page proclaims its dedication to “progressive” policy solutions, so the notion that this is anything other than a political reward seems a bit rich. Recently, blogger Jeffrey Lewis has criticized and downplayed the Associated Press’ revelation about a side deal between Iran and the International Atomic Energy Agency (IAEA) that would essentially gut verification by allowing Iran to test itself. What Lewis did not acknowledge was the $75,000 his home institution received from Ploughshares, according to the Fund’s 2014 report. The Aspen Institute also received Ploughshares money to education Congressmen and senior staffers about Iran policy options, again, effectively to lobby them. In addition, the Fund gave $75,000 to Gulf-2000, a listserv run by former Carter Iran hand and “October Surprise” conspiracy theorist Gary Sick. While ostensibly non-partisan, in recent years Gulf-2000 has become a “Journolist”-style clearing house to feed pro-Iran talking points to journalists. Sick promotes one line and often uses his prerogative as moderator to censor and exclude arguments and information that may contradict his increasingly radical beliefs.

Nor is all this lobbying for a policy favorable to the Islamic Republic new. In 2010, Ploughshares gave National Public Radio $150,000 in what appeared to be a pay-to-play scheme to get Cirincione and his grantees on air that (UPDATE: Plougshare’s 2013 Annual Report lists an additional $100,000 for National Public Radio). When Chuck Hagel — long a proponent of at-any-cost rapprochement with the Islamic Republic of Iran — sat on the board of Ploughshares prior to his stint Defense Secretary, a tenure that even his ideological allies would like to forget, he channeled more than $2 million to support groups, many of which were led by former staffers, which sought to downplay Iran’s nuclear work and normalize ties with Tehran. More recently, Ploughshares has sponsored conference calls to rally support for the Obama administration and ensure a joint strategy among its grantees that, unfortunately, has turned on targeting the Jewish community.

So, in short, Ploughshares spread millions of dollars around to pro-administration groups to support whatever Iran deal came out of Vienna. To criticize the Iran deal would be to risk a significant source of funding — double digits percentages of their total budget in most cases — of these various groups. Seldom did these groups acknowledge the support provided by Ploughshares. The Ploughshares Fund’s strategy has amplified its success by cultivating both the non-partisan label of groups like the Arms Control Association, National Iranian American Council, or Atlantic Council, while using them to amplify each other’s similar messages. Hence, various organizations hosted one-sided panels in the wake of the Iran deal announcement with multiple Ploughshares grantees without acknowledging their funding from the same pot. For example, on March 26, the Arms Control Association sponsored an event featuring the National Iranian American Council. J Street, and the Friends Committee on National Legislation are all Ploughshares grantees.

President Obama is absolutely correct. Big money is seeking to sway the debate about the Iran deal. I personally have very little contact with AIPAC — I spoke twice at their conference on issues relating to the Arab world, never on Iran — in my 16 years in Washington, far less than, for example, than left-of-center pundit Peter Beinart. But, at least when AIPAC seeks to make its case, it does so openly; it does not pretend to be something it is not. What Ploughshares has done (and very successfully as well) is to fund myriad proxies who will push similar lines in concert with each other and Ploughshares, seeking credibility from their supposed objectivity, when the reality suggests they are anything but. When Obama warns of dark money and nefarious lobbies, it seems increasingly he is projecting. 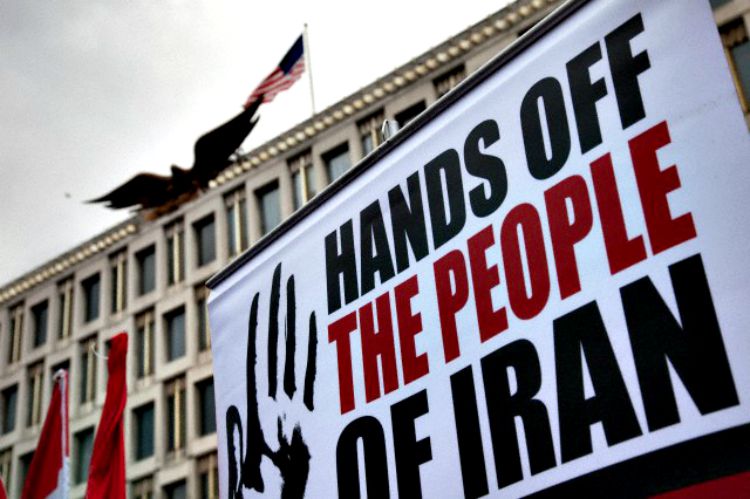