One of the most astounding things about the State Department — and its complete and utter lack of competent management over the course of multiple administrations — is that the leadership either fails to identify metrics by which to judge progress or focuses on wrong, meaningless metrics.

In Dancing With the Devil, there’s a whole chapter documenting how the State Department simply makes it up as they went along when negotiating with rogue regimes like North Korea, the Islamic Republic of Iran, or the Taliban’s Afghanistan. There is seldom any plan ahead of time, nor do negotiators gauge their progress to predetermined metrics. Consider, just as a single example, how many red lines President Obama and Secretary of State John Kerry voided during the course of the Joint Comprehensive Plan of Action (JCPOA) negotiations. Iranian Foreign Minister Mohammad Javad Zarif was not alone in besting his American counterparts at the negotiating table. Declassified intelligence consistently shows that State Department announcements regarding progress in closed meetings and high-profile talks bare no relation to the real progress of talks. Like a gambler who seeks just one more pull of the slot, American diplomats rationalize concessions, believing that if they can just stay at the table a little longer, they might win the grand prize.

So if the State Department doesn’t calibrate metrics to national security, then how do diplomats set their goals? Broadly, the State Department (and USAID) infamously count money spent rather than count what specifically that money actually buys. Embassies and bureaus, however, have their budgets and will host conferences, exchanges, or sponsor events to burn through their budget. The fact that they treat tax dollars as funny money is beside the point. The bureaucracy has gotten so unwieldy, that it would be very difficult to reform the diplomatic culture and its spending habit unless it became the overarching goal of the Secretary of State, the Deputy Secretary of State, or their immediate offices.

When it comes to the secretaries themselves, however, travel has become a metric embraced not only by the press but also by the State Department itself, at least under Secretary of State John Kerry. The Washington Post has broken down secretary travel in a number of different ways beyond simply countries visited and miles in the air but, when push comes to shove, it is these two figures with which the press seems obsessed.

If diplomatic achievements were measured by the number of countries visited, Hillary Rodham Clinton would be the most accomplished secretary of state in history. While historians will debate and eventually rate her tenure as America’s top diplomat, Clinton is already assured of a place in the State Department record book. When her plane touched down at Andrews Air Force Base outside Washington early Tuesday morning, the former first lady completed an epic 13-day journey of 27,000 miles — about 2,000 miles more than the circumference of the Earth — through and over Europe to Asia and then doubling back to the Middle East. One well-traveled Clinton staffer described the France-Afghanistan-Japan-Mongolia-Vietnam-Laos-Cambodia-Egypt-Israel itinerary as “especially absurd, even for us…” While some previous secretaries may have flown more miles — mainly due to shuttling back and forth to the Mideast on peace missions — none has visited more nations. Clinton broke that record last month, eclipsing Madeleine Albright’s total of 98, when she traveled to Finland for number 99 and then hit the 100 mark in Latvia. Not content, she tacked on another two countries — Mongolia and Laos, where she was the first secretary of state to visit in 57 years and only the second ever — on her latest trip…

But can secretaries be judged by the sins of the press? After all, can a secretary of state really control what the Washington Post or Associated Press find important when journalists have to fill copy? In Clinton’s case, alas, the answer is yes. Among the emails released to the public from Clinton’s private email account is this, correspondence showing explicitly that Clinton was picking countries less by the efficacy of national interest and diplomacy and more because she simply wanted to check the countries off an irrelevant list to say she had been there. That was narcissism to the Nth degree, but it is made even worse when considering the tens of millions of dollars in taxpayer funds spent in each trip given the size of the entourage with which the secretary chose to travel. If Clinton saw her time as secretary as a means to enjoy perks rather than reform and better the institution over which she had executive authority, then she should certainly explain herself, especially given the taxpayer-funded and entirely excessive perks of the presidency.

Clinton is not alone. Kerry is on a similar pace for travel. Sustained diplomacy such as that which led to the Iran deal has been an exception for a man who has spent the vast part of his career on the public dime. Rather, most of his visits have been short, meaningless to broader U.S. national security interests and not even symbolically worth the time and effort. Every visit disrupts normal embassy function for weeks in advance and also represents time that he is not overseeing the reform of an institution that — regardless of political party in power — is desperately in need of reform.

It’s time to break the cycle whereby secretaries of state travel the globe. The reality is rather than building prestige with photo-ops, every trip erodes the stature of the office. Travel should be rationed to mean something, just as it was decades ago. Ministerial and presidential meetings can just as easily occur in Washington as in Moldova, Congo, and the Solomon Islands. Secretaries should publicly justify the expense of their travel to Congress, if nothing else than out of respect for the oversight of Congress and as a necessary check-and-balance for what increasingly has been out-of-control executive spending whose returns are disproportional to the money spent. Perhaps it’s time to ask presidential candidates and their potential secretaries how they will fix diplomacy rather than whether they will simply spend billions to see the world. 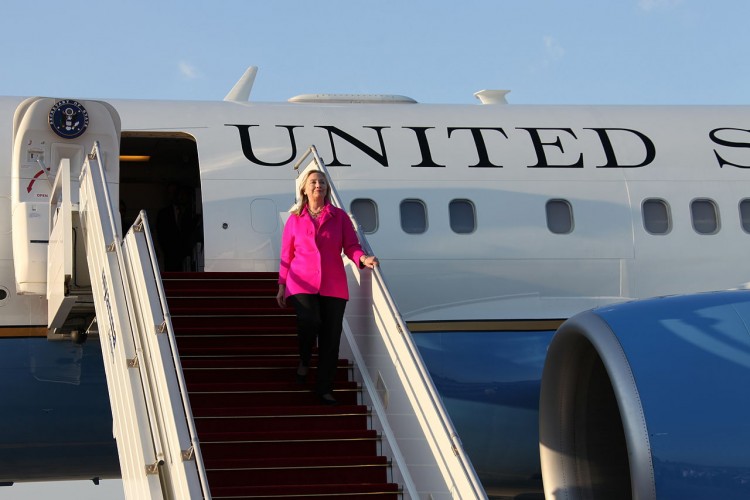