There’s an unfortunate tendency among American diplomats and policymakers to allow time to launder the most atrocious regimes. It becomes sophisticated in the minds of diplomats to transform terrorists that are pariahs one year into targets for diplomacy the next.

In Years of Upheaval, Kissinger ridiculed the notion of talking with terrorists. “We did not have a high incentive to advance the ‘dialogue’ with the PLO, as the fashionable phrase ran later,” he wrote, “not because of Israeli pressures but because of our perception of the American national interest.” He further explained how, “Before 1973, the PLO rarely intruded into international negotiations. In the 1972 communiqué ending Nixon’s Moscow summit, there was no reference to Palestinians, much less to the PLO…. The idea of a Palestinian state run by the PLO was not a subject for serious discourse.” In 1972, Black September, a PLO offshoot-proxy, attacked the Munich Olympics, and a year later, the National Security Agency heard PLO leader Yasir Arafat give the order to murder U.S. Ambassador Cleo Noel who had been taken hostage by Palestinian terrorists in Khartoum. Simply put, you can’t get more pariah than that.

But, just six years later, Andrew Young, a civil rights hero whom Carter had appointed to be the U.S. ambassador to the United Nations, met secretly with Zehdi Terzi, the PLO’s representative at the UN, ostensibly to determine whether there was any formula by which the PLO would accept United Nations Security Council Resolution 242. The State Department had never authorized the meeting between Young and a PLO representative. When reprimanded, the defiant Young resigned. President Carter, true to form, privately blamed Israel for forcing the issue to a head. And while many conservatives lionize President Ronald Reagan for his moral clarity, it was at the tail end of the Reagan administration that the State Department—with Reagan National Security Council permission—began talking to PLO representatives.

The same lack of resolve holds true with Hamas. In 2003, Richard Haass, at the time director of policy planning at the State Department (and now president of the Council on Foreign Relations) dismissed any notion of talking to Hamas. Speaking on PBS Newshour, he said, “There are some groups out there you can negotiate with. You have to decide whether there are terms you can live with,” he explained. “But groups like Hamas … have political agendas that I would suggest are beyond negotiation. And for them…, there’s got to be an intelligence, a law enforcement, and a military answer.” Just three years later, however, he suddenly began to advocate for engagement with Hamas.

Haass’ turnaround was consistent with the Council on Foreign Relations’ informal role as the barometer of elite opinion, rather than its path breaker. Already, in 2005, the Carnegie Endowment’s Marina Ottaway had argued that political power might moderate Hamas by forcing its accountability to a constituency, never mind that donations from terror sponsoring regimes insulate Hamas from popular accountability. Chris Patten, the European Union’s former chief diplomat, in a March 13, 2007 Financial Times op-ed, counseled forgetting Hamas’s past and starting anew, never mind that in the run-up to the elections, Hamas co-founder Mahmoud Zahar vowed, “We will join the Legislative Council with our weapons in our hands.” Jimmy Carter was just as willing to whitewash the record. He told NBC’s Meredith Vieira in January 2009, for example, that Hamas had upheld its ceasefire with Israel—seemingly unaware that the group had fired over 600 mortars and rockets into Israel the previous month. The next month, Paddy Ashdown and ten other former statesmen and politicians signed a letter published in The Times of London saying, “We have learnt first-hand that there is no substitute for direct and sustained negotiations with all parties to a conflict, and rarely if ever a durable peace without them. Isolation only bolsters hardliners and their policies of intransigence. Engagement can strengthen pragmatic elements and their ability to strike the hard compromises needed for peace.” Even Hillary Clinton got in on the act: Her State Department approved a direct meeting between diplomat Rachel Schneller and the Hamas representative in Lebanon. Through it all, had Hamas changed? No. Its charter still embraces genocide, and the group remains just as committed to terrorism, if not more so now that it knows it can act without losing diplomatic credibility.

As for Iran, Sohrab Ahmari’s “The 36-Year Project to Whitewash Iran” says it all. Seldom has a regime so intent in rhetoric and practice to murder Americans been given so many repeated free passes on it actions.

Time has even laundered Al Qaeda and it fellow travelers among proponents of engagement. Secretary of State Colin Powell was roundly ridiculed for suggesting outreach to “moderate Taliban” just months after 9/11, but that’s exactly what Secretary of State Hillary Clinton subsequently made the policy of the United States. As for Al Qaeda proper? It only took four years before the first academic researchers began suggesting dialogue with Al Qaeda. While a moderate Syrian opposition existed in the first months of the uprising against President Bashar al-Assad, it was quickly pushed aside, defeated, or co-opted by far more radical groups. The Nusra Front made no secret of its fealty to Al Qaeda. When the Islamic State went its own way, suddenly the Nusra Front looked moderate by comparison. Was it moderate? Absolutely not, but that has not stopped the Turkish government, whose counter-terrorism work the State Department still praises, from arming it. Members of the Syrian National Coalition, which the State Department supports, also advocate negotiation with the Nusra Front.

This brings us to the Islamic State. Far from degrading and defeating the group, President Obama’s strategy has at best been ineffective and at worst allowed the group space to grow. It has consolidated control over territory and has begun brainwashing a generation of children. Some among a more radical fringe have already suggested negotiations with the group. While most analysts would recognize the futility and ridiculousness of such a position given the murderous ideology which the Islamic State embraces, the absence of moral clarity among diplomats means that it’s only a matter of time until the Islamic State becomes a fact of life in the diplomatic mind, and some ambitious diplomat or Nobel Prize-seeking Secretary of State quietly suggests letting bygones be bygones and insisting that realism mandates talking to the enemy. Such a scenario might sound ridiculous today, but it’s the only outcome of a rudderless, valueless foreign policy. After all, if the PLO, Hamas, Hezbollah, Iran, Taliban, chemical weapons-wielding Syrian regime, and even Nusra Front can become partners, then there is no behavior so evil as to force permanent pariah status. That is, unless both Republicans and Democrats in Congress recognize just how sick U.S. diplomatic culture as become and re-assert their oversight role in earnest, use the power of the purse to constrain the State Department, and legislate to set the parameters of a more responsible policy. 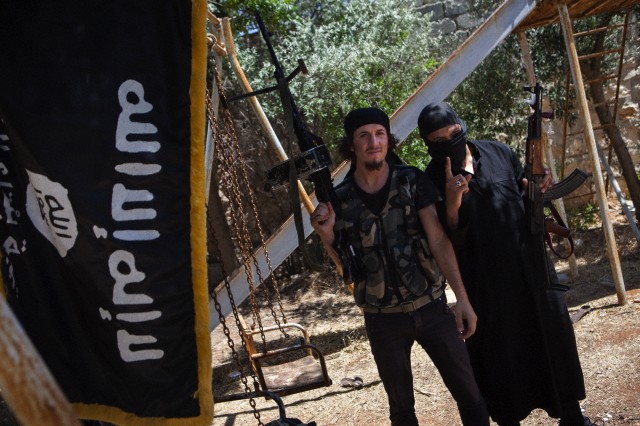