For much of its recent history, Yale University’s administration maintained a deliberate aloofness from its students. It focused on the development and management of the university’s physical plant, the growth of the university’s academic programs, and the cultivation of a world class faculty. Successive Yale leaders also understood that pandering to undergraduate students would be thankless and counterproductive. After all, the majority of Yalies’ political activism could be chalked up to exploration and testing boundaries rather than substantive political thought. True, generations of undergraduates succumbed to various political fads organized and demonstrated on the campus’ Beineke Plaza and sometimes even sought to invade Woodbridge Hall, where the university president maintained its offices. But students grow up, and most became productive and decidedly more moderate members of society upon graduation.

Fads and movements came and went. In the 1960s and early 1970s, Yale students protested the Vietnam War and hounded the ROTC off-campus. In the 1980s, students focused on anti-Apartheid activism. The Committee in Solidarity with the People of El Salvador (CISPES) became the cause du jour for students prone to activism. With the growth of Yale’s unions, labor then became an increasing outlet for students, joined soon after that by environmental causes. More recently, gender and race took center stage as students of the 2000’s and 2010’s sought to recapture the glory days of earlier protest eras. Hence the transformation of Jerelyn Luther, a native of Fairfield, Connecticut, into the iconic “shrieking girl” in the Silliman College courtyard in the aftermath of the 2015 Halloween costume debate.

The administration’s detachment from political causes was purposeful. For four years, Yale becomes the world to undergraduates. They arrive wide-eyed and enthusiastic. They do not see the cyclical nature to many issues, that student newspapers like the Yale Daily News or Yale Herald repeat exposes every five or six years unbeknownst to their editors. Nor do they realize that the strength of Yale depended on its stable foundations capable of weathering any political or economic storm. Yale University Presidents Kingman Brewster, Bartlett Giamatti, Benno Schmidt, and even Richard Levin interacted with students but, when push came to shove, they understood that doing their job well sometimes means sacrificing popularity with students and, for that matter, faculty.

Current President Peter Salovey, however, appears different. As a professor, his popularity with students mattered to him. In introductory psychology, he was an entertaining lecturer and an easy grader. Word spread. Soon, he was attracting more than 1,000 students to his “Psychology and Law” class. Most other faculty members, in contrast, sought to limit attendance to maximize teaching effectiveness. Salovey’s teaching assistants, meanwhile, even printed t-shirts proclaiming “one-in-four, maybe more,” a riff on the adage at the time that one-quarter of Yale’s population was gay, and also a testament to how poor in math many Yale social scientists can be. That he also performed regularly on campus in a faculty blue grass band only solidified his reputation as a man-of-the-people.

Alas, as president, it seems that Salovey’s desire for popularity among students has manifested itself in a willingness to appease and affirm student demands, however radical they might be. For example, students want to rename Calhoun College because of its early 19th Century namesake’s position on slavery? That decision may be reasonable, given that Calhoun wasn’t just a slave owner but a vocal advocate for the practice. But when Corey Menafee, a Calhoun dishwasher, smashed a historic stained glass window because he didn’t like that it depicted slaves complaining, Yale not only dropped charges after students rallied around him but also rehired him. Menafee, for his part, complained that he should need to work near “racist, very degrading” images, no matter if they were historic or not.

Every problem, real or imagined, at modern American universities mandates the formation of a committee, and the stained glass window incident was no different. In its wake, Salovey established a Committee on Arts in Public Spaces (CAPS) to ensure that Yale’s artwork respected the community’s diversity. In short, modern sensibilities and political fads now transcend history.

The greater problem at Yale now seems to be that the standards by which the CAPS now judges are subjective. Consider its latest effort to erase art and history: Yale’s Sterling Memorial Library was designed by James Gamble Rodgers and opened in 1931 as the center piece to the gothic revival campus. For decades, Yale tour guides (I was one, briefly, for the admissions office) pointed out the whimsical carvings and statuary which adorned the building in place of the traditional gargoyles, which might occupy similar positions in European gothic architecture. One of these carvings depicted a musket-carrying Puritan and a bow-drawing Native American. Worried that the carving might offend Native American students, university librarian and CAPS chair Susan Gibbons ordered the Puritan covered but succumbed to pressure. They’ve now agreed to remove the stonework entirely.

Here’s the irony: Inside Sterling Memorial Library is a painting at the bottom left-hand corner of which is a worker holding a hammer and sickle. This is a reference to the reality that communism was becoming increasingly popular at the time, thanks in large part to New York Times correspondent Walter Duranty’s reporting from the Soviet Union. This then raises the question: Why would the depiction of a Puritan with a musket offend at Yale, but an endorsement of communism, an ideology responsible for the death of over 100 million people in the 20th Century, pass without mention?

Make no mistake: This is not a demand that Yale expand its campaign against offensive art to the center piece of Sterling’s interior. It is an example of the hypocrisy inherent in applying arbitrary political standards retroactively. Indeed, the biggest scandal seems to be a university faculty so obsessed with their own transitory popularity that they are willing to sacrifice rather than preserve history.

An earlier version of this article erroneously stated that Jerelyn Luther received honorary status upon graduation. 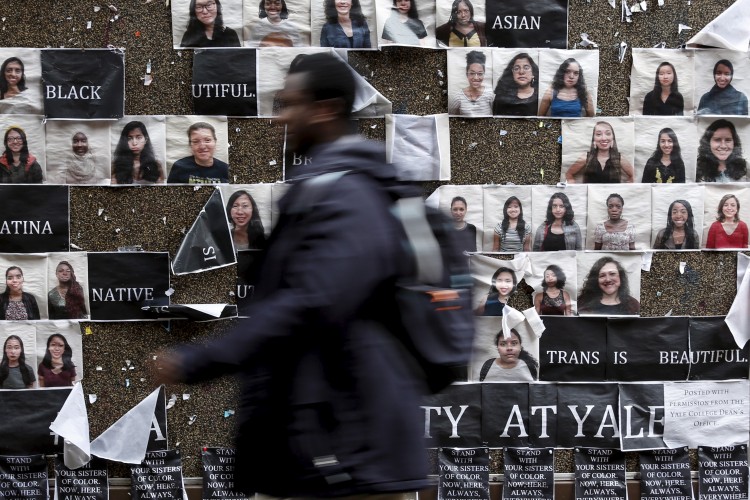