Superficially, the parallels between the issues that will likely to come to dominate the 2016 presidential election and those of another election year, 1968, are eerie.

Abroad, Americans have grown uncomfortable with the president’s halfhearted conduct of a necessary but unloved war. It has become inescapably clear that the tempo of operations is dictated by domestic political concerns rather than strategic considerations in theater. Internationally, a terrible ideology diametrically opposed to Western democratic ideals appears to be gaining ground, attracting support in unlikely corners of the globe, and exporting terrorism and insecurity into the heart of the West. And at home, public fears about the breakdown of order in America’s urban centers and the relationship between law enforcement officials and the public they serve are approaching the forefront of voters’ minds. This presents Republicans an opportunity they would be wise to exploit, but it would be a mistake for the party to think it can simply run the next Richard Nixon and win the White House.

When voters cast their ballots in 1968, their apprehension in regards to accelerating urban violence was palpable. In the four years that preceded that election, rioting in Watts, Baltimore, Washington D.C., New York City, Detroit, Newark, and even right outside the Democratic National Convention in Chicago tore at the nation’s social fabric. Today, urban and race-related rioting has again come to occupy American minds as places like Ferguson and Baltimore erupt in self-defeating property destruction and violence. Some believe that these riots are a portent of things to come, and the Long Hot Summer of 1967 will recur in 2015.

And as was the case in 1968, a cottage industry has developed around the idea that policing is not the solution to the problem of urban chaos but the cause of it. President Lyndon Johnson’s Kerner Commission, chaired by Illinois Gov. Otto Kerner, laid the blame for unrest in inner cities primarily at the feet of the police officers that patrolled them. Heavy handedness, a lack of representation on those forces by black residents, and genuine racial discrimination played a role in fostering a sense of hopelessness and creating the conditions that resulted in a backlash, the Kerner Report indicated. “White society” had created two “separate and unequal” systems in America, and threatened to develop into an American version of “Apartheid.”

47 years later, and an African-American president and his two African-American attorneys general are contending with similar urban violence, but the recommendations for how to deal with the situation haven’t changed all that much. Today, chronic black unemployment and empirical racial disparities in the criminal justice system have accentuated the often-legitimate perception among minorities that a double standard is at play. As in 1968, it is vogue to blame the authorities – and local police forces in particular – for the outbreak of unrest.

But voters did not share that belief in 1968. Running as a “law and order” candidate, Richard Nixon handily won the argument over how to address urban unrest, and his prescription offered little deference to the conclusions in the Kerner Report. Today, the left is relearning the lessons of a half-century ago. Citing a Princeton University study released last month, New York Magazine columnist Jonathan Chait observed that it is demonstrable that “riots make America more conservative.”

“The physical damage inflicted upon poor urban neighborhoods by rioting does not have the compensating virtue of easing the way for more progressive policies; instead, it compounds the damage by promoting a regressive backlash,” the liberal columnist observed.

To borrow an aphorism from the decade of discontent, you don’t need a weatherman to know which way the wind blows.

Today, as a likely result of the left’s demonization of American police, urban law enforcement officials are unable or unwilling to perform the necessarily risky work of policing urban environments. “Violent crime — killings, robberies, rapes and assaults — is rising in half of the 10 biggest U.S. cities, including Los Angeles, where the rate is up 25 percent,” NBC News reported. “Murders are up in four of the biggest cities, most notably New York, the nation’s poster child for crime reduction.” Baltimore has experienced its deadliest May since 1972. “Meanwhile, arrests have plummeted since April’s unrest in Baltimore, with only 1,177 people arrested so far in May compared to 3,801 in the same month last year,” the Baltimore Sun revealed. St. Louis Police Chief Sam Dotson called the spike in violent crime the results of a “Ferguson effect,” and blamed his city’s 17 percent hike in violent crime and 25 percent spike in murders on their inability to conduct proactive policing operations.

New York City’s self-styled progressive icon, Mayor Bill de Blasio, outright accused his own police force of racism in the wake of a grand jury’s failure last year to indict the officer responsible for the accidental death of Eric Garner. His careless calumny resulted in a virtual work stoppage by the NYPD, and has yielded a hike in the murder rate that has touched even the glittering showpiece borough of Manhattan. Illustrative of the left’s intellectual bankruptcy and its inability to be responsive to public perception, de Blasio is preparing to blame this condition on the city’s inventory of already tightly controlled firearms.

The GOP will and should be tempted to run on a law and order platform, but it would be a mistake if the party abandoned its nascent commitment to pursue criminal justice reforms. Sentencing reformation and the scaling back of the objective failure that is the War on Drugs would go some way toward addressing the black community’s antipathy toward law enforcement. What’s more, Republicans would do well to continue to emphasize the accurate critique of the left that they appear to believe that “black lives matter” only when they are taken by white police officers. Their primarily African-American residents disproportionately feel the spike in violence in urban centers. Moreover, the blight that is left in the wake of urban violence often takes generations to repair. While the left daydreams about urban “uprisings,” Republicans would do well to note that they are concerned more with the preservation of black lives and livelihoods than realizing a Marxist revolution fantasy at the expense of American minorities.

It is not 1968, and the Republican Party would do well to disabuse themselves of the notion that it is. There are, however, political opportunities in the left’s self-satisfied myopia and their failure to internalize the lessons of that turbulent period that would be irresponsible for the GOP to ignore. 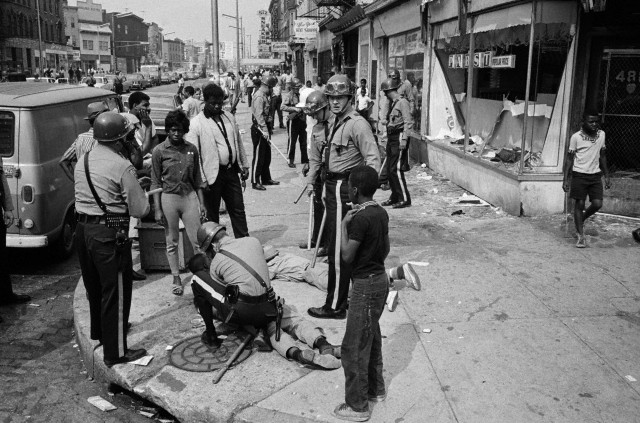