Few outside the Islamic State’s broken and truncated caliphate greeted the death of ISIS chief Abu Bakr al-Baghdadi with more trepidation than British Labour Party leader Jeremy Corbyn. His response to the death of this brutal theocrat masqueraded as caution, but BBC interviewer Andrew Neil exposed it for what it was: cowardice.

In their infamous exchange, Neil asked if Corbyn would approve an operation to neutralize al-Baghdadi’s successor—a question Corbyn resolutely dodged. He objected to the hypothetical, deferred to “international law” as the proper venue for prosecuting ISIS terrorists, and pontificated about the root causes leading to ISIS’s rise. But Neil cut to the quick: “People just don’t think you would do it, do they Mr. Corbyn?” he asked. They did not. Three weeks later, British voters dealt Labour its worst defeat in the modern age.

The creeping Corbynization of the Democratic Party is evident in how some of its leading lights have reacted to the overdue demise of Qasem Soleimani, the architect of death and suffering in the Middle East on an almost unimaginable scale. Most were quick to offer pro forma denunciations of this terrorist commander, but they reserved their strongest criticisms for the president who took him out.

Sen. Elizabeth Warren indulged the conspiratorial hypothesis that Donald Trump “assassinated a senior foreign military official” to distract from his impeachment. Sen. Bernie Sanders, too, called the operation that dispatched Soleimani an “assassination,” implying illegality without explicitly saying as much. “Trump just tossed a stick of dynamite into a tinderbox,” Vice President Joe Biden lamented. Sen. Chuck Schumer fretted that Trump could be “either bumbling or impulsively getting us into a major war.”

The steadfast dedication to partisanship and ideological blindness evident in these reactions is staggering. The suggestion that the opportunity to strike Soleimani was undertaken extralegally ignores the fact that this was the commander of a U.S.-designated terrorist organization operating on third-party soil where America is actively engaged in counterterror operations at the request of the host government. It also dismisses the active threats to U.S. personnel across the region, which Reuters indicates were in the operational stages. You don’t have to accept U.S. intelligence assessments at face value to believe; you only have to believe your own eyes. Since last spring, Iran has been responsible for a campaign of piracy and sabotage in the Strait of Hormuz, the downing of U.S. military assets, a brazen attack on a Saudi oil facility, a campaign of deadly rocket attacks on U.S. positions in Iraq (including Baghdad’s Green Zone), and the siege on American diplomats in the U.S.’s Baghdad-based embassy.

Trump had arguably underreacted to these provocations, and his reluctant decision to respond with something approaching proportionality isn’t an effort to start a war but to prevent Iran from miscalculating its way into one. That’s the proper preemptive response to an imminent threat expected of any commander-in-chief. It’s hard to suffer through Democratic handwringing without being reminded of Neil’s searing indictment: “People just don’t think you would do it.”

And yet, Democratic concerns about the president’s capacity to manage this grave foreign crisis—the first of its kind during Trump’s presidency—are not without merit. Donald Trump has not made a single public statement since ordering last Thursday’s operation that has not been either unhelpful or counterproductive.

In the wake of the strikes on Soleimani and a variety of Shiite militia groups loyal to Iran, for which Tehran promised retaliation, Trump tweeted a threat to respond against targets “important to Iran & the Iranian culture.” When Secretary of State Mike Pompeo insisted the president was not interested in executing counter-value attacks that would incense even Iranians hostile toward their theocratic regime, Trump confirmed that his chief diplomat didn’t know what he was talking about. “They’re allowed to kill our people. They’re allowed to torture and maim our people. They’re allowed to use roadside bombs and blow up our people. And we’re not allowed to touch their cultural sites,” Trump fumed. “It doesn’t work that way.”

In response to the U.S. operation against Soleimani, the Iraqi government—a body composed of an abnormal concentration of Iranian catspaws—cast a symbolic vote objecting to the American presence on Iraqi soil. The legitimacy of the Iraqi government is presently in doubt. Only weeks ago, after popular anti-Iranian protests in Iraq were violently put down, the Iraqi Prime Minister was compelled to resign. Iraq’s president rejected an overtly pro-Iranian candidate as his successor in the effort to appease anti-Iranian sentiment. When Soleimani was neutralized, Iraqis flooded Baghdad’s streets in celebration. Donald Trump would be better served by nurturing these sentiments, but he has instead reacted to the toothless Iraqi vote to expel U.S. troops with typically directionless ire. “We will charge them sanctions like they’ve never seen before ever,” the president said of Iraq. “It’ll make Iranian sanctions look somewhat tame.” Such needlessly provocative statements only aggravate tensions in Iraq while yielding no appreciable tactical benefits to the U.S.

“These Media Posts will serve as notification to the United States Congress that should Iran strike any U.S. person or target, the United States will quickly & fully strike back, & perhaps in a disproportionate manner,” read one of the president’s bizarrely imperious tweets. “Such legal notice is not required, but is given nevertheless!” Indeed, Trump is right; his tweet served no legal or political purpose other than to inflame his domestic opposition at a time of heightened national tension.

This was the moment that Trump-skeptical Republicans always feared, and their concerns have not yet been proven groundless. Even Republicans who applaud the president’s decisive, if belated, counter-force strike against an Iranian terrorist commander with American blood on his hands must confront how unsuited the commander-in-chief is to this moment. The best anyone can say about Trump’s spasmodic conduct is that it won’t matter, but conservatives who are being honest with themselves must confess that this is more hope than analysis. Serious moments demand sober and rational minds at the helm, and the president’s behavior so far does not inspire confidence. 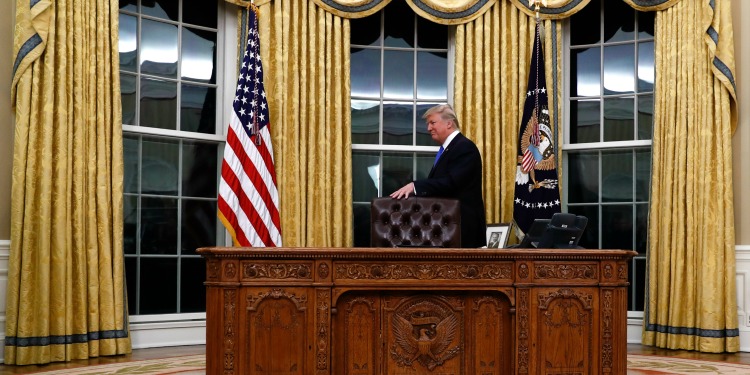