The Western Hemisphere reached a milestone this week. According to United Nations observers, Colombia’s leftist rebel militia FARC has entirely disarmed. When it comes to monitoring rogue actors, the UN’s representatives have a spotty track record, but even FARC’s leaders are endorsing the group’s transition away from violence. After a half-century of war, Latin America’s longest-running insurgency is over. Unfortunately, celebrations must be tempered by the sobering developments on the other side of the Colombian border. There the violence surging, the military is teetering, and the political class is nearing the point of irreversible illegitimacy. The prospect of Venezuela collapsing in on itself looms dreadfully large.

The crisis in Venezuela again made its way into international headlines following a daring attack on the country’s Supreme Court. On Tuesday, an elite police officer-turned-actor allegedly commandeered a helicopter and flew it over the nation’s high court, dropping live grenades on the building from overhead. No one was injured in the attack, but the rogue cop posted a confession on social media expressing the hope that his actions would stir the country to overthrow President Nicolas Maduro’s government.

It worked, in a way. Maduro took the daring and potentially galvanizing raid quite seriously. He immediately appeared on state television to denounce the assault, mobilized the military, and implied that Washington D.C. was behind the incursion. Accordingly, the world has temporarily forgotten to forget about the crisis in Venezuela. That condition seems unlikely to last.

This current bloody chapter in Venezuelan history began on March 29, the country’s Supreme Court (an institution packed with Maduro loyalists) stripped the country’s legislature (an institution dominated by the opposition) of its authority. The veritable coup attempt was short-lived; the Latin American world all but broke off relations with Caracas until the high court reversed itself. But the fuse had been lit. The assault on Venezuelan sovereignty set off a display of violent and ongoing demonstrations against Maduro, his predecessor Hugo Chavez, and the Bolivarian Revolution.

The current spasm of violence against the Venezuelan regime by its oppressed peoples long ago became bloodier than earlier outbursts of anti-government unrest. The death toll resulting from organized violence in Venezuela surged to more than 62 dead at the beginning of June—among them a 37-year-old judge who was involved in the unorthodox conviction and sentencing of one of Venezuela’s most well-known political prisoners, Leopoldo Lopez.

The Maduro government’s efforts to undermine the elected opposition in the National Assembly have also failed to subside. Despite this unrest, the Maduro government has forged ahead with a plan to create an alternative Congress that would render the National Assembly obsolete. The Venezuelan president plans to put a new constitution to the public in a July plebiscite, and he has shaken up his cabinet and military to ensure the new government is filled with as many key loyalists as possible.

The forthcoming referendum is a mere formality. The opposition is boycotting the upcoming election. Even former Maduro loyalist and Venezuela’s chief prosecutor under Chavez, Luisa Ortega, denounced the vote as an attack on the fundamental pillars of Venezuelan democracy. The new government will be illegitimate, ensuring that the opposition and the violence continue.

As Maduro continues to shed the confidence of Venezuelan power brokers, the talk of a military coup has grown louder and louder. The head of a group of exiled Venezuelan officers, former National Guard Lieutenant Jose Colina, told The Telegraph that the regime’s support rests on the shoulders of a handful of politically loyal army officers. The unreliable ones are being sent to the provinces or are being disposed of in other, grislier ways. “The government is purging the armed forces as it anticipates having to use the army to repress growing street protests,” said retired Admiral Ivan Carruto.

While there are no outward signs of dissent against the government, Reuters revealed that recruiting for the military and police is becoming more difficult. The Telegraph reported that, according to exiled sources, some 5,000 officers have left the Venezuelan army and could make up the backbone of paramilitary forces in the event of a putsch. The stability of government is, however, due entirely to the fact that most of the army remains loyal to it. A coup attempt with sufficient support could fail. If it did, it would likely result in a civil war.

The prospect of a protracted Syrian-style conflict in the Americas seems an event for which policymakers in the United States are ill-prepared. Such a scenario would mean the implosion of a country rich with oil resources, a state flush with government-backed narcotics traffickers, money, and weapons. It could spark a refugee crisis similar to that which has cast the Middle East and North Africa into disorder and strengthened the rise of reactionary elements inside Europe. It would be a conflict that would threaten American national security and may necessitate and armed American response.

The trajectory Venezuela is following in 2017 is eerily similar to the path Syria took in 2011. It would behoove the United Nations, the Organization of American States, and the United States, in particular, to begin preparing the public for the prospect of necessary contingency operations. The worst case scenario is now pretty easy to envision. 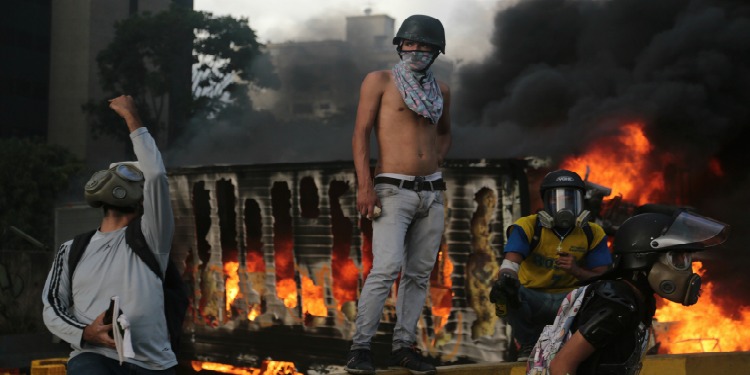