A foolproof way to get a read on someone’s ideological partialities is to present him or her with a Bernie Sanders for President spot. The self-described democratic socialist’s advertisements are virtual political Rorschach tests. For example, the center-left political universe gushed over a schmaltzy ad that featured a variety of beaming, monochromatic Sanders voters accompanied by the Simon & Garfunkel tune “America.” In a feat, the anachronistic vapidity of that advertisement was surpassed by an unofficial Sanders’ latest 60-second pitch to voters dubbed “Together.”

In that advertisement, a typically rabble-rousing Sanders speech accompanies torn and tattered images of Americans of every color and creed. Those ripped images of a diverse set of Americans are then mended, ostensibly by the promise of socialism. The rather shallow message is clear: Sanders will repair the social, class, and cultural divisions that have torn America apart over the last seven years. No mention, by the way, of why those divisions have been so aggravated. It’s probably the Republicans’ fault.

Predictably, the hyperbolic praise reporters and pundits alike heaped upon this ad was a match for any tortured attempt by leftist blogs to convince Americans Trevor Noah is actually funny. “Stunning,” “powerful,” “the complete opposite of modern politics,” et cetera. To call it trite is to buck liberal orthodoxy, and nothing is so ruthlessly derided as a deviation from center-left conformity. “Our job is not to divide,” Sanders declared in the ad that sent thrills up the legs of his radical supporters. “Our job is to bring people together.” Really? You wouldn’t know it from watching Thursday night’s Democratic debate. The entirety of the Democratic platform is not only to lament the dystopian hellscape that America has become under a Democratic president, but to view voters as self-contained interest groups motivated entirely by their collective racial, sexual, or gender identity.

Take an issue, almost any issue, and the Democratic Party’s two candidates will address it through the prism of identity politics. The sluggish economic recovery, moribund GDP growth, and stagnating wages have made Americans feel uneasy, Hillary Clinton averred, but African-Americans are more uneasy than others. “African-Americans who face discrimination in the job market, education, housing, and the criminal justice system,” she sympathized after noting that all Americans are struggling with the after effects of the 2007-2009 recession. “Who denies that African-American youth unemployment, real, is over 50 percent?” Bernie Sanders shot back; accurately, as it happens. What about the barely reconstructed Marxist senator from Vermont’s favorite hobbyhorse: “millionaires and billionaires on Wall Street” – that shadowy cabal of scoundrels responsible for all of your woes? “Turns out that the African-American community and the Latino community were hit especially hard,” Sanders revealed. Americans of majority ethnicity got off easy after the crash. Who knew?

A substantial portion of the debate was devoted to the issue of the reformation of the criminal justice system; the incarceration of African-Americans, police violence directed toward African-Americans, and sentencing which unfairly metes out longer prison terms to African-Americans. The assertion that these conditions are the results of racial bias or discrimination is debatable, but any real or perceived systemic injustice only further erodes the public’s faith in American institutions. The perception, however, that police violence is a black-versus-white issue is misleading, and the faith that has replaced data-centric critical analysis on this issue speaks to the evolution of the Democratic Party, which has transformed into a collection of competing identity groups.

Don’t forget the fairer sex. No debate with Hillary Clinton on the stage would be complete without her caricatured appeals to gender solidarity. Women, too, are negatively affected by the economic adversity that today typifies Barack Obama’s America. “When the Social Security program was started in the 1930s, not very many women worked. And women have been disadvantaged ever since,” Clinton insisted. “I believe that it’s most important that we unleash the full potential of women and girls in our society,” she swore. “I want to take care of women.” Clinton’s forced appeals to comradery among her fellow women took a mortifying turn when she solicited applause from the audience for the fact that the two debate moderators were also women. “So, you know, we’ll take our progress wherever we can find it,” she groveled.

Those moderators were perhaps equally guilty of playing identity politics. PBS anchor Judy Woodruff asked Clinton why so many women voted against her in New Hampshire if her appeal as the first “woman president” is so strong. “Do you worry at all that you will be the instrument of thwarting history, as Senator Clinton keeps claiming, that she might be the first woman president?” Gwen Ifill asked Sanders. Perhaps the only reason why Democrats were compelled to address the majority white population, in fact, was a result of the moderators probing the candidates about that demographic.

“White people?” the senator shot back in mock surprise.

“I know,” Ifill replied to the audience’s guffaws. Yes, we’re all in on the joke.

“Look, I am deeply concerned about what’s happening in every community in America, and that includes white communities, where we are seeing an increase in alcoholism, addiction, earlier deaths,” Clinton said after she was asked if white Americans have a reason to be “resentful” as a result of their imminent consignment to the minority in the United States.

In addressing the subset of Americans who describe themselves as white, the two Democratic candidates essentially explained the appeal of Donald Trump among the center-left, blue-collar electorate. Those voters would love to cast their ballots for a Democrat if Democrats wanted their vote. It was eminently clear that neither Sanders nor Clinton have an especially firm grasp on the conditions this demographic faces.

When asked if it obscured the issue of economic stagnation to frame it in racial terms, Sanders said it did not. The winners and losers of the rising service economy that continues to replace the manufacturing economy, he claimed, is both a racial matter and a “general economic” dilemma brought about almost exclusively by foreign trade. “Now no one thinks that working in the factory is the greatest job in the world,” Sanders insisted, exposing his affiliation as a stubborn gentry liberal who nurses an unhealthy resentment toward a lumpenproletariat that will never fully achieve class consciousness. “But you know what, you can make a middle-class wage, you have decent health care, decent benefits.”

Clinton, too, tried to put her finger on the pulse of the white workingman when she lamented the plight of Appalachia and coal country. “You know, coal miners and their families who helped turn on the lights and power our factories for generations are now wondering, has our country forgotten us?” she asked. “Do people not care about all of our sacrifice?” The brazenness of this assertion from a member for four years of an administration that made no secret of its desire to mothball the coal industry for good — an agenda so at odds with the law that the courts have been forced to thwart it — is awe-inspiring.

For all the Democratic presidential aspirants’ talk of togetherness, they do not see America as anything more than a heterogeneous series of isolated voting blocs, which self-identify by skin color, external genitalia, or sexual preference. All the insipid, Benetton-inspired appeals to unity in the world cannot mask the Democratic Party’s disparate, identity-specific platforms. “There is not a black America and a white America, and Latino America and Asian America – there’s the United States of America,” then-Senator Barack Obama declared to wild applause at the 2004 presidential convention that launched his career. It turns out the economy isn’t the only Obama legacy his party is determined to impugn.

An earlier version of this article failed to note that Sanders’ “Together” ad is an unofficial campaign spot. 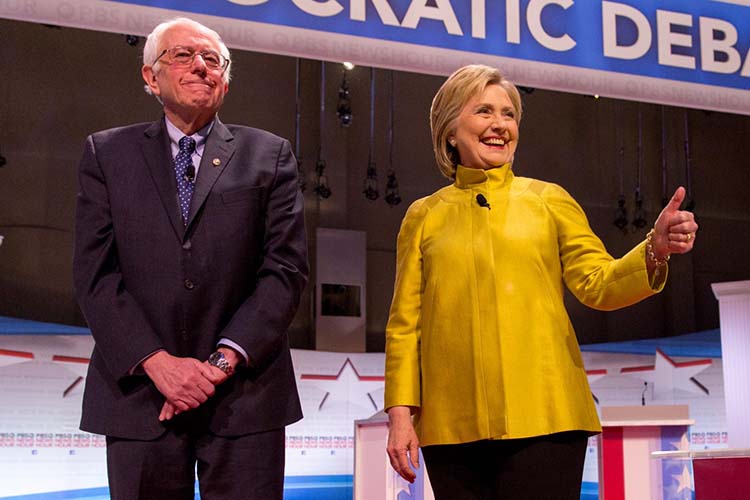