House Democrats, Politico reports, are going to give their Republican counterparts an ultimatum: Strip the conspiracy theorist Rep. Marjorie Taylor Greene of her committee assignments now, or the Democratic majority will do it for them.

If the Democratic Party’s objective is to compel House Republicans to act against one of their own, this ultimatum will have precisely the opposite effect. Republicans are trapped in a prison of their own making, and Democrats are leveraging it for all it’s worth.

Greene’s seats on the House Budget and Education and Labor committees have been a source of consternation for her colleagues even before records surfaced showing her favorably upvoting violent threats against her fellow members. But minority leader Kevin McCarthy promised only to have a “conversation” with his paranoid colleague, and Greene has since secured the tacit endorsement of her party’s equally paranoid leader, former President Donald Trump. If McCarthy were to move against Greene, it would risk the wrath of those Republican voters for whom no association is too sordid. Their uncomplicated reasoning isn’t hard to follow: If the Democrats are against her, she must be doing something right.

The negative attention Greene has received from the left has induced a predictably tribal response from the right. “The Democrat mob has declared me enemy #1,” a typical fundraising email from the congresswoman’s office reads. “But in reality, they’re not after me. They’re after you. I’m just in their way.” Taking advantage of the Democratic Party’s efforts to single Greene out has proven a lucrative enterprise. According to her office, the congresswoman raised $1.6 million since she became the target of Democratic criticisms.

Thus, the vortex in which Republicans find themselves becomes self-perpetuating. Greene makes reckless, inflammatory remarks, and Democrats demand satisfaction–thereby raising Greene’s profile and triggering the GOP’s protective instincts. Everyone gets what they want out of this deal, except for the Republican Party.

The Marjorie Taylor Greene saga presents in miniature the problem Republicans face with Donald Trump ahead of his “trial” in the U.S. Senate following his impeachment. The conspicuous mass resignation of Trump’s attorneys ahead of proceedings that they were almost certain to win—insofar as Trump is unlikely to be convicted by a two-thirds vote of U.S. senators—strongly suggests that Trump is still suborning unethical behavior. If he does manage to find attorneys who will argue baseless charges of election fraud in the former president’s defense, he will make the Republicans who are already committed to dismissing the article of impeachment even more uncomfortable than they already are. But Republicans believe they have no choice. Here, too, they are hostages to the feedback loop.

And yet, the loop is not a fact of nature. It can be broken. That would be a difficult prospect—one that would elicit punishment from the most vocal and dogmatic Republican. But Republicans are going to be dealing with pain one way or the other. In Greene’s case, they can punish her and risk the wrath of their most committed voters, or they can do nothing and allow her to become the new face of the Republican Party, thereby further alienating the suburban voters who abandoned the Republican Party over the course of Donald Trump’s presidency and cost them control of Congress and the White House. Either way, the forecast calls for pain.

For now, the GOP seems inclined toward passivity and inaction—neither embracing Greene outright nor defending her from Democratic attacks. And in the process, the party has determined to irritate those on all sides of the issue. 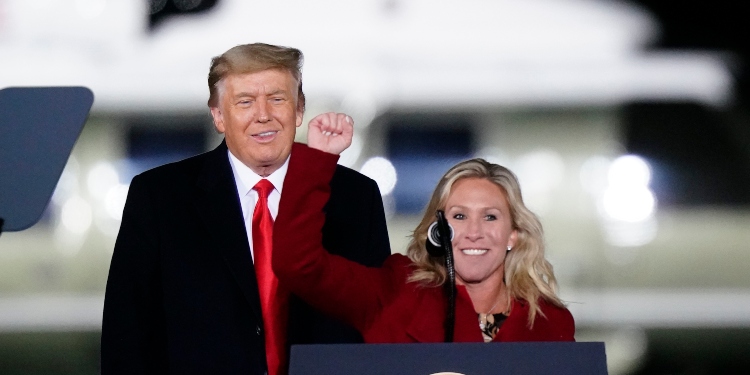