On Friday afternoon, two alleged “bombshell” reports were released regarding the scandal involving Donald Trump’s links to Russia. Only one of these reports, however, deserves to be called a bombshell, and it’s a doozy.

The Washington Post on Friday broke the revelation that the investigation into the Trump campaign’s contacts with Russian officials had identified a current high-ranking member of the White House as a “significant person of interest.” This means that the investigation, now headed by a special prosecutor and former FBI Director Robert Mueller, is allegedly closing in on senior administration officials.

The story, citing only “people familiar with the matter,” is pretty thin. In fact, the supposed revelation that an investigation into people closely associated with the president is zeroing in on people closely associated with the president is no revelation at all, even if the list of Trump associates has expanded beyond Paul Manafort and Mike Flynn. What is significant, though, is that nearly 48 hours after Mueller’s appointment, he has been unable to shut down leaks to the press. If that continues, it will be a real problem for the administration, but it would also taint the legitimacy of the investigation and hinder Mueller’s ability to reach an impartial conclusion that Republicans and Democrats alike will accept.

A true bombshell was, however, published almost simultaneously by the New York Times. The Times secured a document summarizing the meeting between Donald Trump, Russian Foreign Minister Sergei Lavrov, and Russian Ambassador to the United States Sergei Kislyak—a document that White House Press Secretary Sean Spicer “did not dispute.” It revealed that President Donald Trump told the Kremlin officials he “just fired the head of the FBI. He was crazy, a real nutjob.” Trump further bragged, “I faced great pressure because of Russia. That’s taken off.”

In other words, Trump appeared to confirm that he viewed the firing of James Comey as a way to hinder the investigation into his campaign’s contacts with Russia. If proven, that could be said to represent obstruction of justice, and that’s an impeachable offense.

A source who spoke with the Times tried to defend Trump by claiming that the president only said what he thought his interlocutors wanted to hear. The only misdemeanor that the president is guilty of, then, is the crime of being indiscreet and too eager to please. This familiar excuse is not a defense; it’s a count in the potential indictment.

The meeting between Trump and these Russian operatives was a disaster from beginning to end. Right away, Trump angered the American press by excluding them from the meeting. His administration was embarrassed when it was revealed that the Russians had lied about the photographer present—he wasn’t Lavrov’s man but an employee of Russia’s state-owned news agency Tass. The White House was annoyed when the photos they took were leaked to the press and appeared on front pages across America. They were humiliated when it was leaked that Trump had revealed classified intelligence to a non-allied nation originating from an Israeli source regarding national-security threats. Now, Trump appears to have bragged about his firing of Comey and revealed that it was done for self-serving and obstructionist reasons. That’s the definition of a bombshell.

Despite what some commentators on the right have concluded, Trump is not the victim here. He is his own worst enemy, and he cannot stop shooting himself in the foot. These are serious allegations, and Republicans should treat them as serious allegations. If they won’t, Democrats will. And if Republicans appear willing to cover for Trump indefinitely, Democrats will have a whack at this ball sooner than many may think. 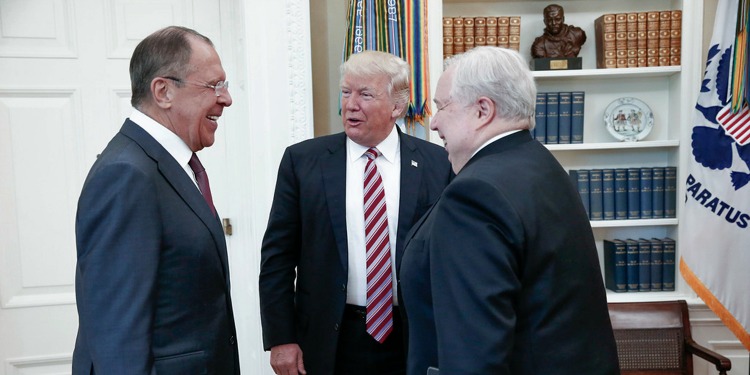