“Officially,” Mikhail Sergeevich Voslensky reflected, “there is no censorship in the Soviet Union.” Describing the Soviet process of silencing perceived sedition, Voslensky, a member of the Soviet Academy of Sciences who would emigrate to West Germany in the 1970s, explained that the formal literary review process in the Soviet Union was a perfunctory, even banal, affair. The author had already done most of the work. “A Soviet citizen knows what he can write and what he cannot,” he noted. “It would be foolish to write something on a topic which is regarded as unimportant or, worse still, touchy.”

By the time Voslensky left the USSR, Soviet thought control was far from total. Friends exchanged dissenting views in self-published “samizdat” literature. The adventurous listened to Western broadcasts on shortwave radio. The regime knew the alternate reality that it had constructed for their citizens was increasingly disbelieved, and that it didn’t take much effort to lift the gossamer veil it had draped over the real world. But every so often, someone would be prosecuted for encountering unapproved thought, and that was enough to enforce the Soviet position as dogma. It didn’t matter whether Soviet citizens truly believed what they said and wrote for public consumption. Even the most spiritless expression of Soviet dogma was enough to satisfy the state’s minders. A superficial and lifeless affirmation of Communist precepts was evidence of the power of the state, even if it convinced no one of the party line’s compelling logic.

It is difficult not to see the intimidation practiced in totalitarian states in the stream of torpid banalities LeBron James loosed on Monday night in the attempt to castigate his NBA colleague, Houston Rockets General Manager Daryl Morey, for daring to express solidarity with pro-Democracy protesters in Hong Kong. This was a man in the prison of his own mind. The platitudinous language James used is so incomprehensible it doesn’t lend well to a transcript, but the sentiments were clear. By standing with the activists on the streets of Hong Kong—activists who fly the American flag, sing the national anthem of the United States, and beg for the kind of rights enshrined in the U.S. Constitution— Morey was offending the Chinese Communist Party and hurting the bottom line.

James’s behavior is understandable, if not forgivable. He was only parroting the party line. When a reporter attempted to ask NBA players about the ongoing state-sponsored violence against demonstrators in Hong Kong, she was cut off and admonished by an NBA official. Fans who have attended games in Washington, D.C., and Philadelphia have been removed from stadiums for expressing pro-democracy sentiments. Brooklyn Nets owner Joe Tsai called the Hong Kong demonstrators a “separatist movement” that represents a “third-rail,” which should not be touched. Golden State Warriors head coach Steve Kerr infamously compared the censorious, violent oppression meted out to demonstrators by law enforcement and paramilitary gangs loyal to the Chinese Communist Party to gun crime in the United States in a pathetic attempt to absolve Beijing of its abuses.

The NBA is not alone in privileging its access to the Chinese labor and consumer markets over its commitment to universal liberal values. Amid criticism from the Chinese state-owned People’s Daily, Apple pulled an app used by protesters in Hong Kong to track police activity. The Walt Disney Company’s products have routinely deployed maps of East Asia that include China’s “nine-dash line,” which annexes the whole of the South China Sea into the People’s Republic. Three major American air carriers have scrubbed references to Taiwan as a separate nation from their websites. Mercedes-Benz apologized for quoting the Dalai Lama in an advertisement. The hotel giant Marriott fired an employee for clicking “like” on a social-media post that China’s nationalist government had deemed seditious.

A reliable mouthpiece for Beijing spelled out the choice before Western firms: “Global brands better stay away from politics,” the CCP-run Global Times warned. “[E]ntities that value commercial interests must make their members speak cautiously.” Naturally, observers might conclude that American commercial interests are at odds with American national interests, and the craven capitulation of Western firms to Beijing’s paranoid demands represents a market failure. But there is another market—the market of ideas—in which China cannot compete, which is why Beijing has taken great pains to suppress competition.

We recognize LeBron James’s fatuous hostage video for what it is because the marketplace for ideas in the United States is competitive enough to provide perspective. We understand Steve Kerr’s disgraceful moral equivalency as bankrupt because we have the freedom to call it that. We can see avarice when American commercial enterprises offer a sop to the fiction that China’s territorial expansionism is legitimate because the contradictory evidence is readily available. We see all this not because the liberal idea has failed, but because it is successful.

Milton Friedman postulated that liberal economics beget liberal politics. Free societies follow free markets—one gives way to and is, in fact, not possible without the other. Critics of the marketplace will rightly note that Friedman’s thesis failed to materialize in China. But the Chinese model relies heavily on information control: i.e., the suppression and distortion of the marketplace of ideas. And it is indisputable that many formerly dominant ideas about how to organize society—from mercantilism to aristocracy—met the chopping block amid the development of literate and prosperous middle classes. It would be profound folly to divorce the flowering of liberalized societies from liberalized economic markets. We cannot combat a repressive, intolerant, protectionist state with repression, intolerance, and protectionism.

This thesis is not without supporting evidence. “We have terminated Project Dragonfly,” Google’s vice president of public policy, Karan Bhatia, confirmed in a U.S. Senate hearing this July. “Dragonfly” was Google’s attempt to enter the Chinese market with a censored search engine that would tailor content to suit the demands of the CCP. As reported, the website would have filtered results related to human rights, religion, peaceful protests, and democracy. Bhatia would not commit to forever leaving the Chinese market unserved—the demands of capital are too strong. But the negative press and political pressure that came down around Google when it resolved to be just a little evil in service to its shareholders proved stronger still.

The demonstrators in Hong Kong are not risking their liberty and safety in the streets in the demand for more access to foreign capital markets. Still, their desire for political liberty is hard to envision in the absence of the economic freedoms bequeathed to them by the British. Americans must steel themselves for combat in the arena of ideas, one of which is the necessity of free and open markets. There is a reason why China’s nationalist project has grown more urgent, aggressive, and totalitarian as its society has become more prosperous and globally interconnected. Just as the self-censorship in the last days of the Soviet Union rang hollow and false, so, too, do the American interests placating Beijing’s insecurities. They are coercions buttressed by no greater moral authority than the threat of force. There is another way, and events in Hong Kong demonstrate how compelling that way remains. China’s attempt to force its anxiety on the West gives away the game. 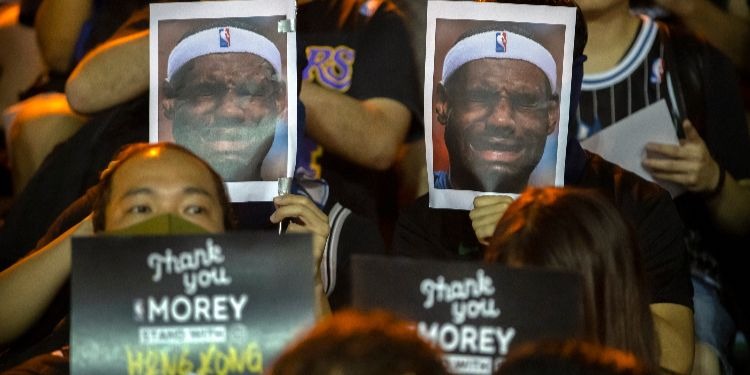