Everyone wants to reopen schools. At least, that’s what we’re told. More in sorrow, society’s most patronizing voices remind us that there’s a pandemic outside. “There will be no way to just ‘live with it,’” The Atlantic’s Alexis Madrigal avers. “There will only be dying from it for the unlucky, and barely surviving it for the rest of us.” Talk about bleak. Only the most callous among us would consign teachers to this waking Cormac McCarthy novel. When and if we discover some palliative therapeutic or vaccine that will deliver us from this nightmare, only then can we even begin to contemplate returning to life as it once was.

That this happy talking point has managed to survive the efforts by the union representing teachers and administrators serving the unified school district of Los Angeles is a feat of triumph over cognitive dissonance. In L.A., the union recently voted overwhelmingly against reopening classrooms in the fall, even though surveys have repeatedly found that California’s parents favor either a partial or full reopening. Unsurprisingly, the city has sided with the union over the communities that its members serve. But to judge from the list of demands the union made as a prerequisite for their return to on-site learning, the pandemic is just one of their concerns.

In the spirit of never letting a crisis go to waste, this institution has predicated the resumption of in-person teaching on the adoption (at the city, state, and national level) of a variety of items on the progressive wish list.

According to the union, schools cannot reopen until Congress passes the HEROES Act, which would allocate an additional $116 billion in federal-education funding to the states. Additionally, the state must pass a ballot initiative that would reassess property values for the purposes of raising local taxes. There should also be a new wealth tax, appropriating the existing assets of the wealthy, as well as a surtax on all incomes over $1 million annually.

Schools will remain closed until and unless some form of “Medicare-for-all” becomes law, thwarting the “boundless greed of the for-profit health industry,” which, “combined with this country’s deeply ingrained racism,” has led to worse outcomes for black Americans. Los Angeles must commit to “defund police” if the city’s parents ever hope to send their kids to school again. After all, “Police violence is a leading cause of death and trauma for Black people, and is a serious public health and moral issue.” And the state must expand the criteria by which residents without U.S. citizenship are eligible for financial and legal protections to the extent that it allows those benefits to flow without even having to apply for them.

Losing the plot further, the union insisted that, even for lockdowns to continue in perpetuity, the city must commit to an ongoing program of “rental relief” and eviction protections. “There is no ‘safer at home’ for those who do not have a home,” the union insists. There must be a new program of paid sick leave for all L.A.-based businesses. And, in the interests of job security, there must be a moratorium on the licensing of charter schools.

If you haven’t already reached the inevitable conclusion toward which this document was leading, the union spells it out explicitly: “Normal Wasn’t Working For Us Before. We Can’t Go Back.” Indeed, if these unrealizable demands are any indication, teachers do not want to go back.

Once again, this document informs us, teachers are “eager” to get back into the classroom. Surely, that is the case for the passionate and dedicated individual educators who love their jobs and know the status quo is a disaster. But at the level of organized labor, the barriers that are being erected before those “eager” teachers are wildly unpopular and functionally insurmountable.

The union insists that it will not allow its member to be used “as kindling” in the effort to “reignite the economy.” If any more onerous burdens must be assumed, they will fall disproportionately on the vulnerable students that distance learning is failing and the parents who cannot provide for themselves or their families while they’re doing the teachers’ work for them. 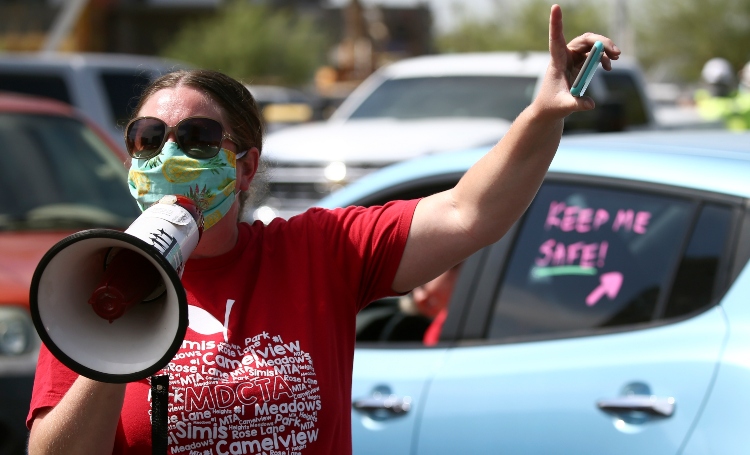